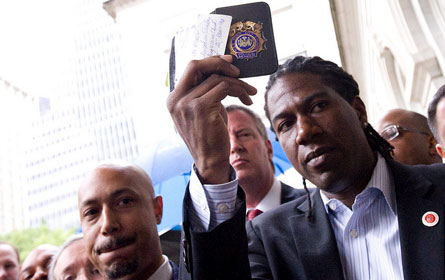 Councilman Jumaane Williams introduced a new bill last week, designed to increase police accountability and limit racial profiling, especially as related to the Stop and Frisk program, where police halt and pat people down for weapons. The bill drew both support and criticism from groups both for and opposed to current New York City Police Department policies.

The bill forbids using race, gender, ethnicity, sexual identity and other characteristics as a reason to stop somebody on the street. It creates the equivalent of Miranda rights for searches, where officers would have to inform people they stopped that they need not consent to a search. Finally, officers who are not on undercover assignments must hand out personal business cards to people they stopped.

“It’s not going to solve all the problems but we think it will make a dent. We are for better policing and safer streets,” said Williams at a conference outside City Hall as February rain fell on the spectators. “You see people here in the rain and the cold saying â€please stop this.’”

The NYPD did not return phone calls requesting comment on this subject.

The Numbers and Motives

Police stopped a record 684,330 people in the city last year, a steady yearly increase from 398,191 in 2005, according to NYPD data. Black and Hispanic people comprised 87 percent of those stopped, with black men being the most frequently stopped group. Whites comprised only 9 percent of the total. Most of the stops occurred in minority, high-crime neighborhoods such as East New York.

According to the NYPD patrol guide, a stop and frisk procedure is designed “to conduct criminal investigations and protect uniformed members of the service from injury while conducting investigations involving stop and question situations.” The U.S. Supreme Court ruled in 1968 that police can stop people without probable cause, on a lesser basis of “reasonable suspicion.”

Standards of reasonable suspicion are vague and give officers broad discretion. Police can stop someone who looks like a known criminal or is walking in a way that suggests a concealed weapon. Additional considerations can be made for time of day and whether an area has a high crime rate. Since 2003, all NYPD officers must fill out a special form for each stop. The form, called a UF-250, comes with a checklist of reasons for the stop. Critics of the NYPD say that the police rarely fill out all of the forms and most stops go unreported.

In 2011, 12 percent of people stopped were arrested, which is down from 14 percent in 2010 but fairly consistent with the years before that, when the stop and frisk arrest rate hovered around 10 percent.

On the other hand, police listed “furtive movements” as a reason in almost half of all stops they made in the first half of 2009. Other major reasons for stop included “casing victim or location” and “other.” The data came from the activist organization Center for Constitutional Rights which monitors NYPD reports.

The rising stops are an extension of Commissioner Kelly’s statistics-oriented approach to law enforcement. The focus on numbers started under the Giuliani administration. Kelly defended the practice as essential to law enforcement and said that it’s perfectly normal to stop this many people in a city of 8 million residents.

“This is a proven law enforcement tactic to fight and deter crime, one that is authorized by criminal procedure law,” Kelly told the Associated Press.

Congressman Peter King, who chairs the Homeland Security committee, spoke at a press conference of Muslims who support the NYPD on Monday. Among his other comments, he praised the stop and frisk policy, saying that it prevents murders and he sees no violation.

Many of Kelly’s opponents disagree, saying that his policies don’t have a direct impact on crime and force some of New Yorkers to live in more fear than others. The most recent chorus of complaints came from Muslim communities, following AP and NY Times reports that the NYPD has been spying on Muslims and showing a controversial film about radical Islam in police training.

“One time, three undercover cops pulled guns on me. One to my neck, one to my temple and one in my chest and they told me that if I moved, I’d be shot,” said Steve Kohut, with the activist group Communities United for Police Reform. “This has been ongoing for a long time.”

Some former police officers say that the stops have a lot to do with pre-emptive policing and focusing on numbers, rather than building relationships with communities and that excessive stop and frisk hurts law enforcement by undermining community trust in the police.

“The NYPD has lots of premonitions about black males: â€ultimately they'll commit crime, let's automate it, all we have to do is press a button.’ They want to get as many black and Latino youths in the system as possible,” said Noel Leader, a retired detective and co-founder of 100 Blacks In Law Enforcement.

He added that most police officers don’t like doing stops but if they fail to get a certain number of stops per month, they might make their commander look bad in front of his superiors and get punished with bad assignments and reduced vacation time. “At the end of the day, the department takes on the personality of Commissioner Kelly,” said Leader.

NYCLU Director Donna Lieberman said that the NYPD’s current policies subject “hundreds of thousands of New Yorkers to stop and frisk for walking while black “ and “walking while Latino.” She went on to say that Williams’ bills are a “win-win” for New Yorkers. “It’s a big deal,” she said.

Not everyone agrees that the bill is a big deal. Leader called it “Another ineffective, nonsensical bill to prevent abuses by NYPD.” Leader complained that the bill would create more rules which are unlikely to see enforcement and that council members need to shift their efforts towards making sure the commissioner obeys existing rules, by going to the governor or higher if necessary.

“Politicians will write all the laws they want but com Kelly will show that they don't have respect for these laws,” said Leader. “Officers who break the law have to be punished. If officers do illegal stops should be suspended or terminated.”

Councilman Williams is the chair of the Oversight and Investigation Committee of the City Council and co-chair of the task force to combat gun violence. He has butted heads with the NYPD over its policies in the past and was once arrested after attending the West Indian Day Parade.