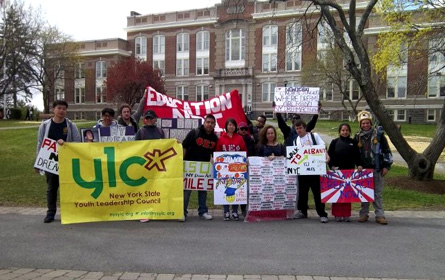 Next Tuesday Marlen Fernandez and a handful of other undocumented students will arrive in Albany to petition state legislators to pass the New York State DREAM Act. The students from the New York State Youth Leadership Council, an advocacy group made up of undocumented youth like Fernandez, will have walked 150 miles from New York City over eight days to deliver their message in the state capital.

Fernandez, 19, is a sophomore at Lehman College studying to be a medical anthropologist. Like many undocumented youth, Fernandez was brought to this country by her parents when she was a small child. But her undocumented status prevents her from receiving state financial aid to pay for her education, so she has to work two jobs, as a cashier and hostess, while she’s in school to pay her tuition.

“I’m always working to save up for next semester. My parents try to help out but they can’t pay for my school and support a family of five,” Fernandez says. Her parents also both work two jobs.

The New York State DREAM Act would allow eligible undocumented students like Fernandez to receive state financial aid for their education through the state’s Tuition Assistance Program (TAP). Estimates vary but the New York State Youth Leadership Council says that at least 4,000 students in state and city public colleges would become eligible for state financial aid. Many more students at private institutions and who don’t attend school because they can’t afford it would also become eligible, the group says.

The Fiscal Policy Institute, an independent economic think-tank that supports the DREAM Act, issued a report stating that the bill would cost the TAP program an extra $17 million. By those numbers, the report says, a taxpayer earning between $60,000 and $75,000 a year would pay $1.34 more in state taxes each year to cover the DREAM Act.

The bill’s supporters say that the cost is well worth the investment, since a college diploma would dramatically increase the earning potential of these students and thereby increase the amount they would pay in taxes back to the state. But opponents of the legislation say that it would provide an incentive for illegal immigration.

The DREAM Act has yet to receive support from Republicans in the State Senate and from Governor Andrew Cuomo. The governor declined to add the DREAM Act to the state budget passed on April 1, frustrating many of the bill’s supporters.

The governor’s refusal to add the bill to the state budget prompted Fernandez and the other undocumented students from the New York State Youth Leadership Council to march all the way to Albany to gather support for the legislation.

Along the way, Fernandez says, the marchers have received a great deal support. They stop at colleges and give presentations about the DREAM Act and share their own stories with other students.

Drivers passing them on the road to Albany honk their support and sometimes pull over to ask the marchers about their cause. As the walkers head upstate into more conservative districts, Fernandez says they’ve been getting some thumbs down signs from drivers disapproving of their message.

“It’s kind of a challenge, but it inspires us more,” she says.

Once they reach Albany, Fernandez and the other marchers plan to meet individually with state lawmakers to ask for their support for the legislation.

If the DREAM Act is passed New York will be the fourth state, after California, New Mexico and Texas, to institute the legislation.

Although the New York State DREAM Act would grant tuition assistance to undocumented students, it would not grant them citizenship. Congress voted down the federal DREAM Act in 2010 that would have granted citizenship to students like Fernandez, despite poll numbers that showed that the majority of Americans favored the legislation.

“We want to push this positive legislation to send a message to the federal government, especially after some of the negative legislation that has been passed like SB 1070 in Arizona,” Rivera said.

But the DREAM Act’s opponents worry that the bill will encourage future illegal immigration to the state.

Dr. Stanley Renshon, a fellow at the Center for Immigrations Studies and political science professor at the City University of New York, points out that the bill has no cut-off date for when a student should have arrived in the U.S. to be eligible for financial aid.

The federal DREAM Act, for instance, said that only students who had been living in the country for five years before the date the bill was passed would be eligible. But without a cut-off date, future illegal immigrants would be able to benefit from the New York DREAM Act, Renshon says.

Perkins calls Governor Cuomo the most important figure in determining if the bill gets passed, and recently wrote a letter to the governor urging his support. Governor Cuomo’s office did not respond to requests for comment for this article.

Renshon says that the governor has to consider the widespread public sympathy for DREAM Act kids, but also could be hurt politically if he’s seen as supporting legislation that would benefit future illegal immigrants.

“The governor has a gauntlet to walk,” he says. “But if he’s smart he’ll figure out a way to find common ground.”

DREAM Act supporters hope the governor will come around in support of the bill.

“This is consistent with everything he’s said about immigrants and education,” says Chung-Wha Hong, the executive director of the New York Immigration Coalition, an advocacy group that is petitioning for the legislation.

Hong points out that the state Education Department, the State University of New York’s Board of Trustees and the state Regent’s Board all support the legislation.

Supporters of the state DREAM Act hope to get it passed in Albany by June, when the current legislative session ends. If the bill isn’t passed this session then undocumented students in this year’s high school graduating classes across New York State will, like Marlen Fernandez, be ineligible for state financial aid.

Fernandez lives with the threat of deportation now that she has come out as undocumented to support the DREAM Act. But she says that she has accepted that risk because she feels its time to take a stand on this issue.

“If you have the ambition, whether you’re documented or undocumented, you should have the opportunity to get an education,” she says as she continues her march to Albany.