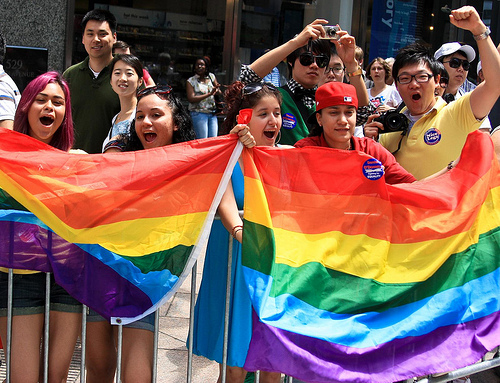 NEW YORK â€“ In a half century, New York LGBT activism burst from the shadows as a militant grassroots movement born at the Stonewall Rebellion in June 1969 â€“ commemorated in the LGBT Pride March on Sunday â€“ drifted into a progressive alliance with mostly Democratic politics, began to build community institutions, radicalized again in response to the AIDS crisis in the 1980s and â€90s and settled into growing its institutions and professionalizing its lobbying at the expense of grassroots control

Today, though almost all of their historic legislative goals have been accomplished, LGBT advocates still have a list of unfinished work in New York, though none of these issues is generating anywhere near the energy that opening marriage to gay couples did.

LGBT advocates are working for a state bill to end discrimination against people of transgender experience and crucial federal rights for gay married couples.

Some are focused on re-electing President Barack Obama, who Newsweek dubbed “the first gay President” -- and others are excited about getting Speaker Christine Quinn into Gracie Mansion as the first woman and first out lesbian or gay mayor of New York City.

But beyond that, the agenda is about worthy goals that do not often inspire mass rallies and demonstrations: increased funding for LGBT and AIDS services, implementation of existing laws such as those aimed at addressing bullying in schools and housing for homeless LGBT youth.

When the Empire State Pride Agenda, the state LGBT lobby, sent out its call to participate in Sunday's 43rd Pride march, it said: "Come celebrate one year of marriage!" â€“ not focusing on what the community still needs to march for.

The parade organizers, Heritage of Pride, who do yeoman's volunteer work putting the massive event together every year, nevertheless continued their tradition of not very pointed themes with this year's "Share the Love!"

Much did change last year for the LGBT community. Gov. Andrew Cuomo, a relative latecomer to supporting same-sex marriage, seized the reins of the campaign for same-sex marriage in 2011 and made the legislation happen, getting competing advocacy groups to work together, while winning over the handful of Democrats and four Republican Senators who had opposed it in 2009.

For his success, Cuomo was celebrated at the head of the LGBT Pride Parade last June in a deafening outburst of joy from the crowd. The marriage win in New York, the largest state where gay couples can marry (although California did it under a state high court order long enough for 18,000 same-sex couples to marry before voters stopped it in 2008), is credited with national polls that now show majority support for same-sex marriage and the president coming out with his "personal" endorsement of it.

"Marriage rights have been won in New York. Now what?" was the title of a forum at New York's LGBT Center on June 13, co-sponsored by Stonewall Democrats and Manhattan Young Democrats. The crowd of about 50 was evenly split between LGBT and non-gay people.

Melissa Sklarz, president of Stonewall and the first transgender person to hold that office, introduced the forum. "For me, the goal now is simple: re-elect President Obama," she said.

Whatever Obama has or has not delivered on the economy, few would dispute that he has advanced LGBT rights enormously with the repeal of "Don't Ask, Don't Tell"; giving gay partners the right to visit each other in hospitals that take Medicare (i.e., virtually all of them); speaking out against anti-gay bullying; and putting the power of the State Department behind promoting LGBT rights in a world where homosexual sex is illegal in more than 70 countries (as it was in 13 states in the United States until 2003 when the Supreme Court struck those laws down) and punishable by death in places such as Iran and Saudi Arabia.

The panelists at the forum also said the LGBT community needs to do more to solve the endemic problem of homeless youth.
Carl Siciliano, who runs the Ali Forney Center to house these young people, said that there are thousands of homeless youth here and "fewer than 100 beds."

"Last year was gut wrenching," Siciliano said, watching Cuomo become one of the "great gay heroes" for delivering on marriage equality "while he was cutting funding for homeless youth in half. If we valued these kids, we would have been loud and aggressive about these cuts."

Vaughn Taylor, deputy director of Gay Men of African Descent, talked about the problem of anti-gay bullying of young people in schools and elsewhere.

"We as adults are not doing enough for them," he said. "Kids abused in schools and by parents leave for street environments that we read about in Third World countries. We can walk down the aisle, but our kids are being left behind."

Changing the culture of schools to make them safe for LGBT youth and others, however, is a long-term process.

Just this  month, Queens fifth grader Kameron Slade was stopped by his principal from reading his essay supporting “same-gender marriage” in a school competition. You can listen to his speech here.

Out gay City Councilman Daniel Dromm of Queens harshly criticized Schools Chancellor Dennis Walcott for supporting the principal's censorship, calling it "a lesson in hate" that signals all teachers and students not to bring up gay issues in school.

And just this week, some students at Roy H. Mann JHS in Bergen Beach, Brooklyn, had no inhibitions about bringing up gay issues â€“ beating Kardin Ulysse, 14, senseless and blinding him in one eye, all the while pummeling him with anti-gay epithets. His family is suing the Department of Education for $16 million.

While New York City bans discrimination based on gender identity and expression to protect transgender people, state legislation to do that has been blocked by Senate Republicans.

Laverne Cox, a transgender activist and actress, said that while the same-sex marriage fight attracted a lot of money and resources, the Gender Expression Non-Discrimination Act has not.

While the opposition comes from the "rightwing stoking fear about safety in bathrooms," she said that people in the LGBT community have to "address our internalized racism, sexism, homophobia and transphobia â€¦ Some people even question transgender people being a part of the community."

There is a big buzz in parts of the LGBT community about the potential of electing Speaker Quinn as mayor next year. While she is the frontrunner in the polls against a host of pro-gay rivals, part of what she may be up against are gay activists who look beyond LGBT issues in deciding who to support.

"You shouldn't vote for a person because she's a gay candidate," said Cathy Marino-Thomas, co-president of Marriage Equality USA. "She has to distinguish herself for all community to pay attention to their needs."

It is not yet the “post-gay” era that some have touted, though out gay legislators have been elected in Queens and Staten Island now, in addition to Manhattan where Assembly Member Deborah Glick broke the ice in 1990. Tom Duane, who was elected the first out gay Council member in 1991, has declined to run for re-election after 14 years in the state Senate.

Andrew Berman, a preservation activist and former Duane staffer who is himself gay and a likely candidate in a field of out gay hopefuls to replace Quinn in the Council, said: "Our top priority has to be our youth."

He added: "There's a progressive agenda that LGBT groups have to be a part of. We should be concerned about the lack of a vigorous Civilian Complaint Review Board â€“ an issue not exclusive to LGBT people, but it affects us. It is important that we be out there with our progressive partners to push."

Veteran gay activist and civil libertarian Bill Dobbs said: "People need to rethink what is a front-and-center LGBT issue. We've ignored many larger things and seem unable to reckon with the concept of economic justice in the age of Occupy."

Indeed, big gay money is going to Republicans who voted for marriage equality but otherwise support a conservative agenda.

Then again, "Gay, Inc.," as the mainstream, well-funded LGBT groups are known, did get involved in the big march against stop-and-frisk profiling on Father's Day, a sign that it may be embracing larger societal concerns.

The marriage movement isn't over either in New York, where advocates are focused on winning the court battles against the 1996 Defense of Marriage Act and convincing members of Congress here to support federal legislation to overturn it.

Obama has long opposed DOMA, whose Section 3 denies federal recognition of same-sex marriages that are legal in six states and the District of Columbia. Last year, he also stopped defending the law in the courts, leaving it to House Republicans to hire counsel to do so.

But Democrat and Republican federal judges alike have handed down five decisions declaring the section unconstitutional, most recently in the case of New Yorker Edie Windsor, who had to pay $363,000 in federal estate taxes after the death of her wife and partner of 44 years, Thea Spyer, in 2009 that she would not have had to pay if they were a heterosexual couple.

Judge Barbara Jones ruled that there is no rational basis for discriminating against legally married gay couples in this way.

A Massachusetts ruling in federal court striking down DOMA was just appealed to the US Supreme Court that, if they decide to take the case, could hear it in the fall term. Striking down DOMA won’t let gay couples marry in every state, but they could enjoy federal rights across the nation.

Quinn and Bloomberg just filed an amicus brief in Windsor’s case â€“ a sign that the mayor has come a long way from his administration’s 2005 successful appeal of a court order to let same-sex marriages be performed in New York, citing Levitical prohibitions on homosexuality. Bloomberg subsequently presided over a same-sex wedding at Gracie Mansion and Quinn just married her longtime partner Kim Catullo.

What’s next for the LGBT movement could be less about individual unions of couples and more about returning to its roots uniting with other progressive movements in common cause.

Jeff Campagna, who co-chaired the LGBT participation in the big Father's Day march against stop-and-frisk, said that building cross-issue coalitions will require some soul searching. "We have to connect all the issues â€“ income inequality, affordable health care and more â€“ and make them ours."