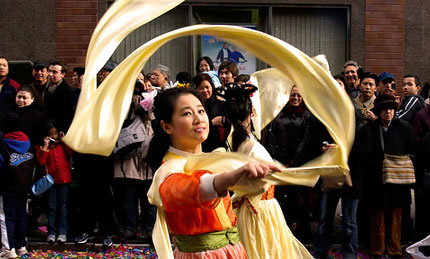 Photo (cc) megapickle
Chinese New Year was one of the few bright moments in this season's economic gloom.

The appointment of upstate U.S. Rep. Kirsten Gillibrand to fill Hillary Clinton's Senate seat sparked concern among many immigrant advocates across the state. As the representative from a partly rural and largely Republican area, Gillibrand opposed any kind of amnesty for the undocumented, supported efforts to make English the country's official language and fought former Gov. Eliot Spitzer unsuccessful effort to give driver's licenses to immigrants, regardless of their status.

In response, Gillibrand, who has also come under attack for her pro-gun views, met with Hispanic leaders earlier this month in an effort to assuage their fears. As she has on other issues, Gillibrand reportedly attributed some of her positions to the district she represented. It remained unclear, though, how her ideas might "evolve" now that she represents the entire state. Nonetheless, Hispanic leaders said they would be watching.

In other news, a report by the Immigration Justice Clinic at New York’s Cardozo School of Law found that in 2006 the Bush administration changed the focus of the National Fugitive Operation Program to focus on the number of undocumented immigrants arrested rather than the danger they posed. As a result 75 percent of the people arrested under the program -- originally designed to concentrate on people who posed a threat -- had no arrest records. Advocates in New York and elsewhere are looking to the Obama administration to change these and other policies, but so far the president has offered little indication of what he might do.

Locally, the city's schools have seen an increase in the number of teenage immigrant students who have never attended school -- even in their native countries. While some 150,000 city public school students have to learn English, the New York Times reported, "An estimated 15,100 ... have had little or no formal schooling and are often illiterate in their native languages."

In addition, New Yorkers from Pakistan's Swat Valley, a Taliban stronghold, have seen tensions from their native home trickling across the Atlantic. Some have been threatened, kidnapped and even murdered on trips back to Pakistan, and others report they have received threats here as well.

The economic recession continues to batter New York's immigrant communities. The crisis has even promoted the reversal of our traditional remittance -- immigrants here are receiving money from back home, instead of the other way around. With so many immigrants in need of services, Public Advocate Betsy Gotbaum's office released a comprehensive Guide to Public Benefits for Immigrants to tell immigrants what assistance they can -- and cannot -- receive. The guide is available in English and five other languages.

The economic gloom did not keep Asians in the city from marking the Lunar New Year (For a video of the celebration in Chinatown, go here). It did though put a bit of a crimp in the festivities. Korean merchants were forced to cut back on the free calendars they traditionally distribute this time of year.

These and other stories from the Chinese, Korean, Spanish and Bangladeshi language press via our partner, Voices That Must Be Heard.

Immigrants Fall Victim to Unscrupulous Mortgage Brokers (New York Carib News)
Immigrants across New York have been duped by lenders from their "home country" and now face losing their homes.

Fallout from Wall Street Hits City's Mexicans (Diario de Mexico)
The collapse of the stock markets affects not only Wall Street financiers, but also Mexican workers who have lost jobs because of the disappearance of hundreds of positions in the financial sector in Lower Manhattan.

Recession Hits Bangladeshi Businesses Hard (Weekly Thikana)
In neighborhoods with large Bangladeshi communities, shops are fighting to stay alive. Many have already either been closed or sold, and owners worry that, if the situation gets worse, more businesses will have to declare bankruptcy.

Not Homeless But Still Hungry (World Journal)
Some hungry people who have a roof over their heads have begun frequenting a Chinatown program to feed the homeless. The organization that runs it says there just isn’t enough food to go around.

Recession Reverses the Flow of Money (El Diario / La Prensa)
The financial and economic crisis is leading many Dominicans to transfer money to the United States from the Caribbean country, a change from the usual practice.

With Companies Cutting Back, Koreans Turn to Nursing (Korea Times New York)
As corporations announce layoffs, many Korean exchange students have decided to switch careers and enter nursing, a field likely to be in high demand in the coming years.

Recession Sparks Increase in Crime (Weekly Thikana)
Crime -- including theft, robbery and carjacking -- seems to be on the rise in parts of the city among Bangladeshi residents and businesses.

Gillibrand Softens Her Stand(La Tribuna Hispana USA)
Latino groups greeted the new appointment of Rep. Kirsten Gillibrand to the U.S. Senate with alarms. Now, facing an avalanche of protests, she is toning down her stance.

Plans to Close Two Hospitals Alarms Queens Residents (El Diario / La Prensa)
Saint John's and Mary Immaculate hospitals could close their doors on Feb. 28. This would add 2,500 people to the rolls of the unemployed and some Queens residents without vital health services close to home.

Census of Muslims Planned (Iran Times)
A new private census hopes to more accurately count the number of Muslims living in the United States. At the same time, it is reviving controversy over the number of religious minorities, how they are counted and why it matters.

Bribing One's Way to Affordable Housing (V Novom Svete)
Can it really be that in the Big Apple you have to pay a large bribe to move into a low-rent apartment under the Section 8 federal housing voucher program?

Push to Make Lunar New Year an Official New York Holiday (Korea Times New York)
The campaign to recognize the Lunar New Year as a holiday is in full swing in New York, with proponents calling on parents to let their children stay home from school that day.

Free Calendar Another Victim of Hard Times (Korea Times New York)
Korean businesses have a tradition of giving free calendars to anyone for the New Year. However, due to the economic depression, many Korean businesses this year cancelled the calendar or gave them only to customers.