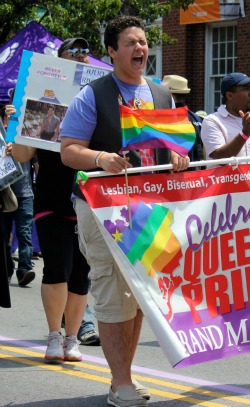 For years, Sade Singh, a Brooklyn-born, self-proclaimed “activist” teenager who lives in Hollis, Queens, watched from afar as individuals around her who identified as gay, lesbian and transgender were harassed — by overt displays of bigotry in her community and occasional incidents of intolerance at her school, Queens Collegiate High School in Jamaica.

“I know for a fact that if you are a gay male, you are not safe in my neighborhood. You will be targeted and you will be picked on,” she said.

She recalled one incident in 2011, when she overheard several people at a corner bodega threaten a group of transgender women who had moved into her Southeast Queens neighborhood. Later on, one of the women was badly beaten.

“It wasn’t reported,” she said. “It’s not on the news unless someone is killed.”

The Road to Dignity

Harassment against gay, lesbian and transgender individuals has received considerable media coverage over the past few years, as a wave of suicides — including the death of 18-year-old Tyler Clementi, a student at Rutgers University who jumped off the George Washington Bridge in 2010 — called into question what protective policies, if any, might stave off tragic outcomes.

Nowhere are these preventative measures more critical, activists argue, than in the classrooms, hallways and schoolyards where students spend around 1,000 hours each year.

In 2009, more than 7 million U.S. students ages 12-18 were bullied at school and more than 1.5 million students were subject to cyber bullying, according to the National Center for Education Statistics.

“In nearly every school, millions of students, gay and straight, suffer in isolation as victims of anti-[gay, lesbian, bisexual, transgender] bullying. Millions of other students wield anti-LGBT epithets without any understanding of their meaning or knowledge of their impact,” said a National Education Association report from the same year. “Nearly a quarter of [LGBT] students were physically assaulted—punched, kicked, or injured with a weapon—because of their sexual orientation.”

In response to these troubling trends, pioneering policymakers and school administrators grapple with a range of questions for which solid answers, to this day, remain elusive:

The state of New York’s response, the Dignity for All Students Act (DASA), became law on July 1. This act goes further than any in the state’s history to specifically spell out what constitutes a “safe and supportive” learning environment.

The law deems students have the right to attend school free from bullying and harassment on the basis of an individual’s actual or perceived sexual orientation or gender identity.