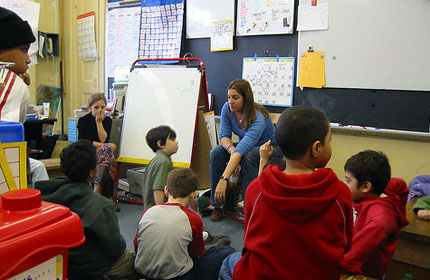 More than half of all New York City public school students are immigrants or the children of immigrants, and one out of four is not a native English speaker. How well do the city schools serve those hundreds of thousands of kids?

This topic has received a lot of attention in the past month and the answer, it seems, depends upon who you ask.

Protecting Women from an Ancient Practice

Thousands of women in New York, immigrants from parts of Africa, Asia and the Middle East, have undergone female genital cutting or face the risk of it here. Yet the city and state do little to address the medical and psychological effects this has had on so many women -- or to protect other young girls who could face cutting in the future. Read more

But, as the Inside Schools blog noted, the report includes other less rosy figures not featured in the press release. It found that "the less dramatic gains by middle school ELLs, relatively flat Regents scores and flat graduation rates (31.6 percent in 2003 and 30.8 percent in 2007) underscore the immediate demand for deeper, more focused attention."

The report came only days after a Bronx hearing on mayoral control of schools, where, the Daily News reported, "State lawmakers grilled city education officials ... on the lackluster progress of English Language Learners since the mayor took control of the schools."

And while the city hails increases in the overall high school graduation rate, Avitia said that less than a third of English language learners graduate -- with the percentage remaining virtually unchanged since 2003. According to Chung-Wha Hong, executive director of the Immigration Coalition, only 10 percent of the students learning English graduate with the more rigorous Regents diploma that will soon be required of all high school students in the state. "We're sounding the alarm because I don't think it does anybody any good to try to gloss over this problem," she told the Times.

Meanwhile a report by Advocates for Children released in mid March concludes that many immigrant parents feel shut out of the schools. They "described being blocked at the door by school security because they do not have official identification, intimidated by school staff who are insensitive or unresponsive to their needs and discriminated against because of their background or limited English abilities," the group said in a release.

For the past several weeks, our partner, Voices that Must Be Heard, has been taking a close look at immigrants in city schools. The findings of reporters from various ethnic papers reflect many of the concerns in the Advocates for Children report, along with other issues affecting students from Russia, China, Bangladesh and Latin America. Also, this month a look at ethnic media, competition for scarce jobs, a food fight on Roosevelt Avenue and more from the Russia, Bangladeshi, Chinese and Spanish-language press courtesy of Voices that Must Be Heard.

Less Than a Quarter of English Learners Graduate, El Diario / La Prensa
The city's high school graduation rate for English language learners is a shockingly low 23.5 percent. This does not bode well for immigrant communities and a city that increasingly relies on them for productivity and growth.

High School Drop-Out Rate Remains High Among Latino Teens, Latin Week New York
Scores of Latino high school students don't graduate from high school on time, forcing them to get a GED or disappear from the education system altogether. What prompts these students to drop out?

Assigning Immigrant Children to Special Education, Diario de Mexico
With an increasing number of students who do not speak English, educators must determine whether children are struggling academically because of learning or developmental disabilities or simply because they do not know the language. To ensure the best placement, parents must advocate for their kids -- an unaccustomed role for some immigrants.

Bangladeshi Parents Unfamiliar with City Schools, Bangla Patrika
Many Bangladeshi parents know little about the city's schools or are reluctant to approach the schools, while others say the schools do not do enough to reach out to immigrant parents. Whatever the reason, the parents' lack of involvement can put their children at risk.

Chinese teenagers and their parents, concerned about large class sizes in city public schools, are checking out private schools, spurred by a surge in scholarships.
Groups Call for More Chinese Classes in City Schools, World Journal
Many children of Chinese immigrants want to learn their native tongue. But such classes are not offered in city public schools, even in Chinese strongholds like Flushing and Sunset Park, so students attend private language classes after the end of the regular school day.

With Jobs Tight, Program for Foreign Workers Gets New Scrutiny, Russkaya Reklama
With hundreds of thousands of people out of work, many Americans, including some immigrants, have come to view skilled foreign workers here on special visas as a threat.

U.S. Will Continue to Deport Haitians, Carib News
The Department of Homeland Security says it will deport undocumented Haitian immigrants, despite appeals by the Haitian government, which has warned that the deportations could destabilize the impoverished Caribbean country.

Development Could Cause Sleepless Nights in El Barrio, El Diario / La Prensa
The massive East River Plaza shopping mall under construction at 116th Street and the FDR Drive could dramatically increase noise and traffic in the area, affecting the health and well-being of thousands of people.

Despite Growing Readership, Ethnic Media Struggle, Carib News
A recent City Council hearing on New York's ethnic media brought up an apparent paradox: Unlike daily papers, ethnic and community newspapers are not suffering from a lack of readers, but they do suffer from a lack of advertising revenue, the mainstay of their existence.

Drugs A Growing Problem Among City's Bangladeshis, Bangla Patrika
An unintended consequence of the Bangladeshi community's progress is the incidence of drug addiction among Bangladeshi women, a problem that has created turmoil in a number of families.

Mexican Family Brings Healthy Food to Brooklyn, El Diario de Mexico
The brothers Gregorio and MartĂ­n Quechol, both Mexican immigrants, recently saw one of their greatest dreams realized as their own business, a supermarket specializing in organic food products, opened in Brooklyn.

Street Vendors vs. Restaurants on Roosevelt Avenue
Food vendors on the Queens street do a booming business -- much to the consternation of restaurants that have seen their business diminish.