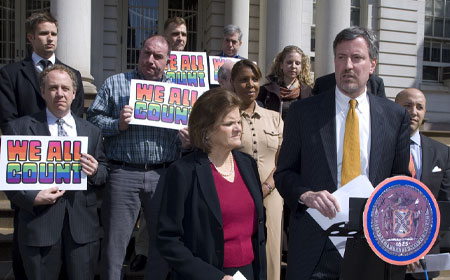 With the U.S. Census -- the decennial count of all of us -- slated for next year, New York officials already are taking steps to insure immigrants include themselves in the tally.

"In a city with approximately 500,000 illegal residents -- potentially more than 5 percent of the population -- getting an accurate count has been a challenge," the Queens Tribune reported recently. The task has prompted the Bloomberg administration to alert immigrants -- documented or not - that being counted will not put them at any risk.

Long a working class neighborhood and a tourist destination, Chinatown sees traces of gentrification up and down its narrow streets. Residents worry that the city rezoning of the adjacent Lower East Side will only speed the trend. Now they have organized to try to ensure that as development comes to the area, its residents will not be shoved aside.

Applauding the Polish-American Congress for encouraging Poles to be counted, the Polish language paper Nowy Dziennik said, "The count results can visibly help or harm each one of us." A full enumeration is particularly vital in these tough economic times, the paper continued, when population figures could determine who gets what funds for social programs.

Meanwhile, another counting -- this one of the unemployed - paints a picture of continued hard times, particularly for the city's immigrants. As the city unemployment rate increases, "indicators suggest that the population without working papers is faring even worse," Andrew Silverstein wrote in City Limits. He reported from Woodside, Queens, where dozens stand "competing for low-skilled jobs in construction, carpentry, moving and cleaning. They used to get picked up for day jobs - but now they just keep waiting. The lack of work has led some to become homeless."

In the restaurant industry, a recent report found widespread discrimination against immigrants -- making them particularly vulnerable as that industry sees fewer patrons and smaller tabs.

But there was some humor last month. In one of the few national television appearances by a New York City Council member since the Daily Show's Jon Stewart showed footage of Allan Jennings hurling an object at a reporter, John Liu got a shout out on Saturday Night Live earlier this month. And Liu wasn't even doing something dumb. Instead the Queens politician, now running for comptroller, was demanding "that a Texas lawmaker apologize for saying that Asian-American voters should adopt names that are, quote, 'easier for Americans to deal with.'" SNL's Seth Meyers continued, "Liu was shouted down by fellow Asian Councilman Cowboy Baseball."

And here's a roundup of stories on the economy, education, politics and other hot topics, selected from the Spanish, Korean, Chinese, Russian and Bangladeshi press via our partner, Voices that Must be Heard:

Wanted: Lawyers for Immigrants, Novoye Russkoye Slovo
In Manhattan, which has perhaps the largest corps of lawyers in the world, hundreds of poor immigrants sitting in an immigration detention center are unable to find an attorney who will help them avoid deportation.

As Economy Declines, African Immigrants Consider Return Home, African Abroad
Finding it difficult to ask for help and getting little assistance from the economic stimulus package and other government programs, many African immigrants wonder whether they should give up on their American dream.

More Latinos Going to Food Pantries, El Diario/La Prensa
As the economic recession worsens and more people lose their jobs, the number of Latinos showing up at churches and food pantries has increased considerably, according to the New York City Coalition Against Hunger and other agencies that donate food.

Hard Times for Small Businesses, El Diario/La Prensa
For evidence that the city's small businesses are disappearing, one only has to walk down Fordham Road in the Bronx.

Bias in City Restaurants, World Journal
Only about 55 percent of minority restaurant employees believe they have the same opportunities in the industry as their white counterparts, according to a new study released by the Restaurant Opportunities Center of New York. Although three quarters of restaurant workers are minorities, white employees tends to make more money, have higher positions and receive bigger bonuses.

Union Urges Boycott of Restaurant, Sing Tao Daily
The Nice Restaurant -- renamed the Splendor Restaurant -- in Manhattan's Chinatown has not reopened yet but members of the 318 Restaurant Workers' Union picket the premises, accusing the owner of discriminating against union workers.

An Election You Might Have Missed, NY Korea Times
The contest for the New York Korean Association cut across racial and ethnic barriers to generate excitement, interest and participation. "This local Korean election campaign has everybody excited. The streets are full of music, and people are dancing and having fun," said one Bronx resident -- not a Korean.

Students Asked About Immigration Status, Weekly Thikana
In a violation of New York City regulations, school officials are asking students about their immigration status when they fill out lunch forms and other school-related documents.

Immigrant Students Learning English, El Diario de Mexico
More English language learners in New York City public schools have achieved proficiency in English than was the case in 2003, according to a report by the city Department of Education.

Schools Offer Few Services to Immigrants, World Journal
Most immigrants with children in New York City's public schools cannot participate in school activities because of language barriers -- even though the city Department of Education requires that schools provide parents with translation services, according to a recent report.

The Pothole That Ate Koreatown, New York Korea Times
Well not quite, but the pavement on 32nd Street in Manhattan is uneven and so plagued with huge craters that merchants have placed makeshift "bridges" over the potholes in front of their stores.