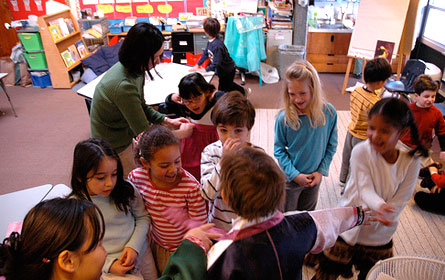 The neglected issue of immigration law reform may be about to move front and center again. Sen. Charles Schumer of New York, who will try to steer the bill through the Senate, told reporters he hoped to have a bill proposed by Labor Day and approved by the end of this year or early in 2010.

According to Schumer, a Democrat, the measure would make it easier for skilled people to enter the United States and crack down on future undocumented immigrants, while helping to guide those already here to citizenship.

Last month, President Barack Obama met with members of Congress on the issue. " "He half-jokingly told us that he was willing to use 'any political capital he has left' for this purpose," Democratic Rep. Anthony Weiner of New York, who was at the gathering said.

So far, Obama has indicated the need for reform without being specific about how he would change things. His administration has reversed some Bush administration policies that were seen as particularly harsh. For example, according to the New York Times, it has issued "new guidelines that make employers, rather than workers, the target of workplace raids and expanded humanitarian-release rules to keep parents detained on immigration charges from being separated from small children." At the same time, Secretary of Homeland Security Janet Napolitano said the department would order federal contractors to check employees' work documents against E-Verify, an electronic system, to determine whether they were here legally.

The various administration statements, according to the Washington Post, " mark the clearest sign â€¦ of Obama's efforts to chart a middle course on immigration enforcement."

While immigration no longer seems to be the "hot button" issue it was a few years ago, no one expects easy passage of a new bill. Already, the Senate has voted to toughen enforcement of immigration laws, sometimes in direct opposition to the administration's position.

In another national story of special interest to many immigrants in New York City, hearings on the nomination of Sonia Sotomayor begin this week. A number of prominent New Yorkers are set to testify in the Bronx native's behalf, including Mayor Michael Bloomberg and Manhattan District Attorney Robert Morgenthau, as well as former Mets and Yankees pitcher David Cone, who was a representative for the players union when Sotomayor helped end the 1995 Major League baseball strike.

Meanwhile, back in the city, as most public school students enjoy their break from classes, the local foreign language press continues to explore the obstacles immigrant children confront in city schools. Sparked by several reports, including one by Advocates for Children on education issues facing immigrant families, stories reported on the tests for Gifted and Talented programs, the difficulties immigrant parents face in finding a school, bullying of Asian students and more.

This month, The Citizen also looks at New York's housing squeeze, AIDS in the Asian community and whether patties made in New York can rival the savory pies produced in their native Jamaica. These and other stories from the Korean, Polish, Russian, Spanish, Bangladeshi and Chinese-language press, via our partner, Voice that Must Be Heard.

Choosing a Schools Challenges Immigrant Families, Novoye Russkoye Slovo
Navigating the maze of school choice in New York City presents difficulties for all parents but it's particularly daunting for immigrant families who may not know the language or understand the city's school choice system.

GIfted Test Poses extra Challenge for Immigrant Children, Weekly Bangla Patrika
Even though they can take the exam in their native language, immigrant children are less likely to pas the test to enter the city's public school Gifted and Talented programs than their American-born counterparts. For one thing, say Bangladeshi parents, the language used in the translations is too sophisticated for small children, particularly those who do not speak English or Bengali, but rather a combination of both languages

Undocumented Parents Shut out of Schools, Sing Tao Daily
Parents who have no valid U.S. identification often find themselves unable to get past the security desk to enter their child's school. A report focuses on hurdles that limit immigrant parents' involvement in their children's education found the ID issue at the top of the list, along with language barriers, lack of encouragement and responsiveness, and inaccessibility of parent associations and school leadership teams.

Children of Unskilled Immigrants Fall Behind in School, Indian Express
Children of unskilled immigrants who come from non-English speaking countries often do very poorly in New York's schools. Lacking a profession and speaking little English, the parents often feel helpless to participate in their children's education and improve the student's performance.

Asian Groups Protest Bullying in Schools, Korea Times
Asian advocacy groups demonstrated in front of the Department of Education headquarters to demand increased protection against bullying and bias crimes in the city's schools. "On-going, widespread harassment" they stated, "puts students in an atmosphere of fear that undermines their academic potential" and can lead to drug and alcohol abuse and even suicide.

Immigrant Parents Volunteer in City Schools, Aramaica
Schools across the city are increasingly seeking immigrant volunteers who understand the linguistic and cultural heritage of students from other countries. For their part, the volunteers say the work helps them be actively involved in their children's schools.

Translating for Parents Creates Stress for Children, World Journal
Children of Asian immigrants often must act as translators, helping parents with limited English navigate through their daily life. Though their parents praise these children as capable and quick-witted, a recent survey found that the children often find it stressful to have to swap roles with their parents and be the grown-ups of the family.

Korean Children Hooked on the Internet, Korea Times
Internet addiction has become such a serious problem among the city's Korean-American children that some parents are turning to professionals for help.

In New York, Living Space Gets Even Tighter, Diario de Mexico
Despite the slumping economy, New York rents remain high and keep climbing, leaving many poor people to double and triple up in already cramped homes.

Death Places an Economic Burden on Bangladeshi Families, Bangla
Along with the sorrow of losing a loved one, many families must also cope with death's financial burdens. In the current recession, organizations offering insurance to cover the cost of carrying of a body back to Bangladesh have raised their prices and other groups have cut back on donations to families that need help.

Despite Recession, Bangladeshi Area Thrives, Bangla
Despite an economic downturn, Jackson Heights, the commercial hub for Bangladeshis in New York, is beating the odds by thriving and expanding. Bangladeshi businesses not only continue to stay alive but commerce is increasing with the opening of new businesses.

No Decline Seen in AIDS Rate among Asians, Indian Express
Asians and Pacific islanders are the only group in New York that has not experienced a decline in the number of new HIV diagnoses, and only 6 percent of these New Yorkers report that their doctor recommended an HIV test.

Crime Increases in Russian Neighborhoods, Russian Bazaar
Following a month when shootings and robberies plagued beachfront areas of Brooklyn, the police have designated Brighton Beach and Coney Island as impact zones, areas that have experienced an upsurge in criminal activity and require additional measures to ensure order.

Bill Would Require Election Information in Russian, V Novom Svete
A bill approved by the New York state Senate would require that all cities in New York with more than 1 million people -- meaning New York City -- translate all ballots and other election materials into Russian. If the bill wins approval from the state Assembly and governor, it would mark the first time in the history of the United States, that Russian would be an of official language of the election system.

Voter Registration Drive Focuses on Polish-Americans, Nowy Dziennik,
A new campaign focuses on getting the city's Polish-Americans registered to vote. The effort by the Polish American Congress has attracted considerable interest, although some people have been disappointed to learn that, without U.S. citizenship, they cannot register or vote.

Italian Restaurant Relies on Mexican Workers, Diario de Mexico
The success of a popular restaurant offering southern Neapolitan cuisine rests in the hands of Mexican workers who have learned the secrets of making good pasta and traditional tiramisu.

Can Patties from New York Pass Jamaica's Test Taste?, Daily Gleaner
Patties -- savory turnovers -- produced in New York by a Jamaican- owned company and then exported to Jamaica have created a furor in Kingston, reflecting, some say, an ambivalence that Jamaicans on the island have toward their compatriots abroad.