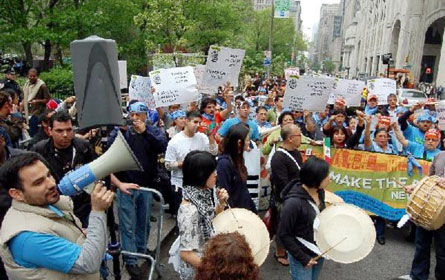 With Congress mired in the debate over health care, changing the immigration laws remained in the political background during the closing days of the summer. However, before he left for vacation, President Barack Obama met with more than 100 advocates seeking changes in the system to assure them that change would be coming.

Although the White house did not allow media to attend the event, the Irish Echo quoted administration spokesman Nick Shapiro as saying, "The president understands our nation's immigration system is broken and needs to be fixed, and that's why he asked Secretary [of Homeland Security Janet] Napolitano to work with stakeholders and members of Congress to move the legislative process forward on this important issue."

In local politics, with the city primary set for Set. 15, a number of immigrants are running for office, while candidates of all backgrounds court the ethnic vote. In the 20th district in Queens, which includes Flushing, all but one of the five candidates is an immigrant. The race in the 23rd district in eastern Queens includes an Indian immigrant seeking to be the first Sikh elected in the city. A Korean immigrant has clashed with a Chinese immigrant over who can best represent Chinatown and the rest of Lower Manhattan's District 1, while several Dominican immigrants are among those vying for the council seat from District 10 in upper Manhattan. And so it goes, across the city.

But while the immigrant experience can boost some candidacies, it can also create problems. City comptroller candidate John Liu, a Taiwanese immigrant seeking to become the first Asian elected to citywide office, has made much of his family' s early experiences here when, he said, he had to work alongside his mother in a sweatshop. The Daily News challenged that account, saying his mother's recollections did not match his.

As Liu stood by his version of events, some -- including the candidate -- saw the incident as a reflection of the embarrassment some immigrants may feel about their early struggles in this country. Liu himself said at a Chinatown rally, he did not realize that his mother's days as a garment worker were "such a painful experience for her."

Manhattan Borough President Scott Stringer told the crowd the Liu controversy had prompted him to ask his mother if her mother — his grandmother, who emigrated from Russia — had worked in a sweatshop. "My mother loudly said, 'No, she worked in a factory,'" Stringer related. But, he continued, she was 15 years old, had no union to protect her, and working conditions were tough. Despite that, back then, he continued, "they weren't called sweatshops."

Regardless of the veracity of John Liu's story, for many immigrants, work here remains a struggle. In the past weeks, the immigrant press has presented stories of construction companies depriving workers of their pay, employment agencies trying to extract unfair fees from people seeking work, and a restaurant chain that underpaid workers and pocketed their tips. They have reported on Mexican parents who leave their children here while they go home to find work and covered the effort by Bangladeshi immigrants to find any job, let along one paying a living wage.

Also this month, The Citizen looks at why some immigrant parents do not help their children in school, mortgage fraud in the West Indian community and the increasing popularity of on-line dating services among young Indians. These and other stories from the Spanish, Chinese, Korean, Bangladeshi and Russian press, via our partner, Voices that Must Be Heard.

Check out stories on abuses in the workplace as well articles on a poll of immigrant women, a city crackdown on food vendors who evade health laws, how Bangladeshis discipline their children, dating among young Indians and more from the Spanish, Chinese, Korean, Bangladeshi and Russian language press via our partner, Voices That Must Be Heard.

Tough Times for Bangladeshi Immigrants, Bangla Patrika
Several recent arrivals to New York describe how difficult it is to find work and earn a decent wage during the current recession.

Labor Abuses Increase in Chinatown, World Journal
Unlicensed employers have cheated many Chinese construction workers out of their wages, prompting a rise in labor disputes in the informal economy.

Children Remain in U.S. as Mexican Parents Return HomeDiario de Mexico
An increasing number of Mexican Americans in New York City are caring for their godchildren, as the economic crisis compels parents to return to their native country in search of work.

Working Immigrants Struggle to Help Children with School Work, Haitian Times
Long hours on the job and a lack of awareness of aspects of U.S. schools keeps many immigrant parents from being actively involved in their children's educations.

Bangladeshi Parents Fear Losing Their Children to Foster Care, Bangla Patrika
Bangladeshi parents traditionally use methods to discipline their children that, in the U.S., might be considered child abuse. As a result, some Bangladeshi children have been removed from their families and placed in foster care.

Immigrants Prey on Fellow Immigrants in Brooklyn, Carib News
The district attorney's office is probing a number of mortgage fraud cases where both the perpetrator and the victim are from the West Indies.

Report Details Abuses by Immigration Officials, El Diario/La Prensa
U.S. immigrant agent used abusive practices including intrusive home searches during work hours, threats and unjustified detentions during roundups of people suspected of being in the U.S. illegally, according to a report by the Immigration Justice Clinic at the Cardozo School of Law at Yeshiva University.

City Cracks Down on Vendor Fraud, El Correo de Queens
The New York City Department of Health and Mental Hygiene wants to revoke the licenses of 500 vendors who are suspected of having participated in a scheme to avoid city rules on food cart sanitation.

Chinese Groups Speak Out on Police Shooting, World Journal
Representatives of the Brooklyn Chinese-American Association appeared at a press conference held by City Councilmember Bill de Blasio after the shooting of the Army veteran, Shem Walker, by a plainclothes policeman. The association wanted to highlight the problem of misunderstandings between new immigrants and the police arising from cultural differences and language difference.

Jewish Nonprofit Helps City's Russians, Prima Russkaya Reklama
The Jewish Board of Family and Children's Services, a group that has been helping people for over 110 years, has assisted almost 4,500 Russian-speaking Americans over the past year. The board's bilingual employees came to America from the Soviet Union many years ago and so understand the problems that immigrants face.

Young Indians Looking for Dates and Love, Indian Express
Conservative families might go to websites promising partners for arranged marriages, but with "love marriages" on the rise, dating sites are a popular alternative for the young Indians in New York and elsewhere in the U.S.

Campaigning on Facebook, Korea Daily
All four Korean-American candidates for City Council -â€“ John Choe and S.J. Jung of District 22 in Flushing, Kevin Kim of District 19 in Bayside; and P.J. Kim of District 1 in Manhattan â€“-has his own Facebook page where they post photos related to their campaigns.