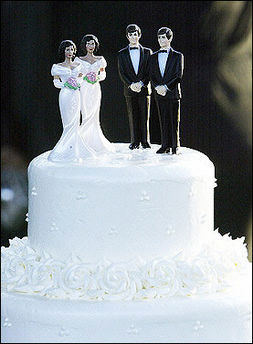 There is no constitutional right to marriage unless your partner’s sex is the opposite of yours, announced the New York State Court of Appeals. The 4-2 split could be summarized as, “It’s all for the children,” versus, “There are enough marriage licenses for everybody.”

Same-sex marriage will continue to be barred in this state unless the Legislature changes the law.

The New York City case, Hernandez v. Robles, is one of four combined cases from around the state. After being denied marriage licenses, 44 same-sex couples brought lawsuits seeking to invalidate the Domestic Relations Law and the issuance of marriage licenses to heterosexual couples only. The plaintiffs, who range in age from 30 to 68, and include a doctor, police offer, teacher, nurse and a member of the State Assembly from the Upper West Side, alleged violations of the state Constitution.

In rejecting that argument, the main opinion by Judge Robert S. Smith is based on the theory that the existing laws reflect a rational legislative and state interest.

The opinion deferred completely to the Legislature, though the court clearly has the power to strike down existing laws. Judge Smith wrote, “The right to marry is unquestionably a fundamental right. The right to marry someone of the same sex, however, is not â€deeply rooted.” Therefore, by limiting marriage, the legislature “has not restricted the exercise of a fundamental right.” In her sharply contrasting dissent, Chief Judge Judith S. Kaye said that marriage could not be fundamental for heterosexuals only.

The four judges who voted to uphold existing law (one of the seven judges recused himself) quickly dismissed the argument that the Domestic Relations Law does not specifically say, “man and woman,” finding the heterosexual nature of the statute in references to “bride” and “groom” and “wife and husband.” They determined that, since the law treats women and men alike -- they are permitted to marry people of the opposite sex, but not people of their own sex -- there is no discrimination. It is just heterosexuals and homosexuals who are treated differently.

While the court agreed with plaintiffs and their supporters that there are advantages to marriage in many areas, such as taxes, wills, and insurance, the judges concluded that the denial of such benefits to same-sex couples is not irrational or unconstitutional. In fact, the court found that the legislature has a right to offer “an inducement - in the form of marriage and its benefits â€¦ to opposite-sex couples who make a solemn, long-term commitment.”

The opinion spelled out that “heterosexual intercourse has a natural tendency to lead to the birth of children, while homosexual intercourse does not. And, despite the advances of science, it remains true that the vast majority of children are born as a result of a sexual relationship between a man and a woman.” Furthermore, said Judge Smith, “The Legislature could also find that [gay and lesbian] relationships are all too often casual or temporary.... The Legislature could rationally believe that it is better, other things being equal, for children to grow up with both a mother and a father.” This the judge called “common sense.”

The dissenters, though, argued, “marriage is about much more than producing children.”

Both the main and dissenting opinions refer to the U.S. Supreme Court’s 1967 decision that laws banning interracial marriage were unconstitutional. According to the Smith opinion, barring gays from certain rights is different. Racism, the decision said, “has been recognized ... as a revolting moral evil” with a “long and shameful” history.

In contrast, the court held that the plaintiffs in the case had not convinced the court that the restriction against gay marriage “is a wholly irrational one, based solely on ignorance and prejudice against homosexuals.” Using language that incensed the gay community, the opinion, while conceding “there has been serious injustice in the treatment of homosexuals,” says, “its history is of a different kind, lacking in centuries of struggle.” One black gay man who attended a Greenwich Village protest following the release of the opinion, said, “It feels the same to me.”

In the dissent, Judge Kaye joined by Judge Carmen Ciparick, wrote that because marriage has previously been limited to heterosexuals does not mean that such a restriction is not discriminatory. In fact, the dissent said, “Limiting marriage to opposite-sex couples undeniably restricts gays and lesbians from marrying their chosen same-sex partners â€¦ and thus constitutes discrimination based on sexual orientation.” The dissent continues, “A history or tradition of discrimination does not make the discrimination constitutional . . . it is circular reasoning . . . to maintain that marriage must remain a heterosexual institution because that is what it historically has been.”

Plaintiffs are denied the rights and responsibilities of civil marriage “because of whom they love,” concluded the Chief Judge. She called the decision “a misstep,” and taking a longer view, predicted change in the future. “This state has a proud tradition of affording equal rights to all New Yorkers,” she wrote. “Sadly the court retreats today from that proud tradition.”