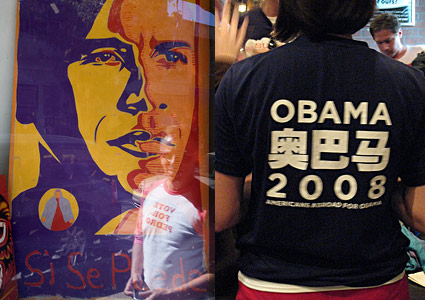 New York's immigrant communities greeted the election of Sen. Barack Obama as president with a mix of elation, anticipation and curiosity. The foreign language and ethnic newspapers speculated about what an Obama administration would mean for their readers -- and their native countries.

Many New Yorkers are girding themselves for the economic hard times ahead, but life has never been easy for the city's restaurant deliverymen. During the recent time of prosperity, many worked long hours for pay far below the minimum wage. Recently, though, they have taken their grievances to court. For more, read Delivering Justice.

El Diario /La Prensa, for example, tried to gauge what an Obama presidency would mean for U.S. relations with Mexico and other Latin American countries. The overall reaction there has been positive, the paper said, although "sectors of the extreme left ... remain skeptical" about Obama. Elsewhere in the region, the Colombian government has concerns about whether Obama will continue to oppose the free trade agreement with the U.S. that that nation wants.

In an article written before last month's terrorist attack in Mumbai, the Indian Express said the Indian government will look at how Obama handles three key issues: the contested area of Kashmir, nuclear non-proliferation and climate change. The New York Carib News spoke with experts who predicted that an Obama administration will cultivate friendlier relationships with West Indian nations, including possible trade concessions and development. And among Turkish businesses people, Obama's election was "met with [an] optimistic reaction" and a belief that trade between the U.S. and Turkey will now increase, according to Zaman USA.

While the United States will have its first black president in Obama, the Irish Voice noted another milestone: "Joe Biden is also the first Catholic vice president. And early exit polling suggests the Obama-Biden ticket won about 54 percent of the Catholic vote."

Many see Obama's election as a sign of a new day -- and fading of bigotry -- in the United States, but last month also saw a sign of the persistence of prejudice. Some 50 miles from New York City, in Patchogue, N.Y., Marcelo Lucero, an Ecuadorian immigrant was stabbed to death allegedly by a group of local teenagers. Following the murder, prosecutors said the young men charged in the case often got together to hunt down, attack and injure Hispanic men in the Suffolk county community.

Immigrant advocates have "described the attack as a reflection of widespread anti-Latino sentiment and racial intolerance in Suffolk County," the New York Times reported, some of it apparently fueled by anger at illegal immigrants and day laborers.

Meanwhile, immigrants and others are feeling the effects of the economic downturn. In a grim post-election commentary, Nowy Dziennik / Polish Daily News said, "Obama will take over the leadership in the worst moment from the financial point of view .... A couple of months from today we will be able to see clearly the consequences of the rapidly worsening macroeconomic indicators -- the decrease of sales and production, deterioration of consumers' attitude and mass layoffs conducted by big corporations."

In Chinatown, the hard times have forced some to scrounge for food, as Bangladeshis cut back on the celebration of Eid-ul Azha, an important religious festival, and groups helping low-income Asians worry about budget cuts. These and other stories from the Spanish, Chinese, Bangladeshi, Korean and Polish language press, via our partner, Voices that Must Be Heard.

Hard Times in Chinatown, World Journal
In Manhattan's Chinatown, the ranks of the impoverished have grown. Families unable to pay the grocery bills survive by cutting costs however possible and even picking through trash bins outside supermarkets.

Slumping Economy Dims Celebration, Weekly Thikana
Feeling the effects of the recession, Bangladeshi immigrants in New York have cut back on the amount of money they send home and have spent less this year to celebrate Eid-ul Azha, a major Muslim religious festival.

Rising Rents Threaten Bodegas, El Diario / La Prensa
With close to 80,000 of the city's Latino businesses threatened by higher rents and abusive practices by real estate speculators, small business owners are supporting a proposal by City Councilmember Robert Jackson, which would spell out the rights of small businesses in commercial rental contracts.

Chinese-American Support for Obama Not a Landslide, World Journal
While Barack Obama won New York by a huge margin, many in the Chinese community had doubts about both him and his opponent, John McCain. In at least one Chinatown polling station, McCain trounced Obama.

Day Laborers Arrested in Queens, El Diario / La Prensa
The arrested of these workers represents a change in city policy. What does it mean?

Why She Drives, El Diario / La Prensa
One of New York's very few woman cab drivers talks about the risks and rewards in her line of work.

Helpline Aids City's Irish Seniors, Irish Voice
Copying an idea launched in Ireland 10 years ago, older Irish people living in New York City will be able to dial a number to speak with a fellow senior about fears, worries and life in general.