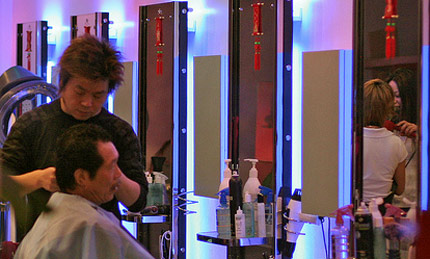 Fong Oi Kan wishes that she only worked five days a week. But in the midst of the worst economy in decades, she said she has to work six days a week in order to keep her head above water.

"The business has gone down a lot in the last few weeks," said Kan, a native of Malaysia, who works as a hair stylist in a salon in Chinatown. "It started in the summer, but it just got worse and worse."

Kan is among the many immigrants whose livelihood is in the service industry â€“ hair salon, restaurant, housekeeping and so on â€“ and who feel the pain brought by the economic downturn. They might not have a 401K retirement plan or investment in the stock market, but many of their customers do, making the effects on people such as Kan harsh and evident. As people feel the economic pain, they may cut back on going to a salon to have their hair done, a luxury in a tough time like these.

"Fewer people are getting perms, curls or coloring," said Kan. "When you don’t have any chemicals involved, the profit margin is very small. A haircut is only about $20 to $30 in Chinatown. And you have to split it with the salon owner."

In the restaurant industry, immigrant workers make up the majority of the back-of-the-house position â€“ cooks, dishwashers, kitchen helpers and so on. A banquet manager at the Rainbow Room at Rockefeller Center, requesting anonymity to protect his job, said the business has suffered as some regular customers â€“ several major financial and insurance corporations - have canceled bookings for holiday parties.

"We are currently underbooked, which is very unusual for this time of the year since the holiday season is so close," said the manager, who is from the Dominican Republic. "The kitchen staff are laid off more frequently, for two weeks here and there."

"Even though I still have my job, my income is reduced because a part of it comes from gratuity," said the manager, adding that the entire company got a 10 percent salary cut.

S. L. Tang, a waitress in an upscale Japanese restaurant in the West Village, said her employer has asked the wait staff to take turn to take one extra day off every week. She said on a recent night the restaurant had only 14 reservations, and everyone finished their work an hour earlier than usual.

"I have some regular customers who never used to ask about the prices when they ordered specials, " said Tang. "Now they do and they also tend to order less food and drinks." She added that the once popular $65 set meal is now a hard sell, replaced by a la carte orders and shared entrees.

The economic downturn has taken a far greater toll on immigrants who are not citizens than it has on the U.S. population as a whole, according to a recent report by the Pew Hispanic Center. The median annual income of non-citizen immigrant households, which account for 7 percent of all U.S. households and 52 percent of all immigrant households, dropped 7.3 percent from 2006 to 2007. In contrast, the median annual income of all U.S. households increased by 1.3 percent during the same period.

Rakesh Kochhar, the author of the report, noted that many non-citizens are employed in blue-collar production, construction or lower-ranked occupations in the service sector. Demand for these jobs increases rapidly in economic expansions but falls just as suddenly during economic slowdowns, the report said.

Meanwhile, a survey conducted by the Pew Hispanic Center showed that half of all Latinos say that the situation for Latinos in this country is worse now than it was a year ago. Family remittances from the U.S. to Mexico were down by 12 percent in August compared to the previous year, according to the Bank of Mexico, the largest drop on record since the bank started tracking remittances in 1996. The percentage translated into about $300 million, affecting Mexico’s second biggest source of foreign income after the revenue from its oil exports.

Demand for day laborers in the New York area has declined, according to the New York Times, prompting many immigrant workers to wonder whether the notion of America as a land of opportunity is still valid.

"The American dream isn’t an American dream," said Jairo Mancillas, an immigrant from El Salvador. He used to send as much as $600 home a week but now he can barely afford to send any money in bad weeks.

Many laborers said they are lucky if they can work two days a week, a drastic change from two years ago when the housing boom in New York kept them busy at least five days a week.

As a result of the falloff in work, some immigrants also face the possibility of losing their houses, Nancy Foner, a sociologist at Hunter College, told AFP, the French news agency. "They are vulnerable because they often make do by pooling incomes in their families," she said. "If one loses a job, it may be very hard for them to meet mortgage payments."

As many immigrant workers got the pink slips, they turn to community-based organizations for assistance in job placement and training.

"A lot of people are looking for jobs because of the economic downturn in addition to the large influx of immigrants in the city," said Pearl Chin, executive director of Chinatown Manpower Project, a non-profit agency that provide social services and career training to Chinese immigrants in New York City. "We have been seeing a lot more people lately," she said, adding that the increase in demand for the agency's services began in the summer.

A Slowdown in Immigration

Some immigrants may caution their relatives to stay home. Data released in September by the Census Bureau showed that overall immigration slowed dramatically in 2007, though the bureau does not distinguish between legal and illegal immigrants.

"The decline in job prospects in construction, service and other low-skilled jobs are communicated through extended networks of would-be movers from Mexico and Latin America," William Frey, a demographer at the Washington-based Brookings Institution, told the Daily News. "It also may propel more return migration," he added.

The Center for Immigration Studies, a research organization that supports tighter controls on immigration, has estimated that the number of undocumented immigrants in the country has declined by 11 percent, or 1.3 million, since August 2007. As of May, the estimated illegal immigrant population in the United States was 11.2 million.

This decline, according to the report, is at least seven times larger than the number of undocumented workers the government removed in the last 10 months. In light of that, the center attributes most of the decline to people leaving the country on their own because of rising unemployment rate and increased immigration enforcement.

The effects of the downturn, though, extend beyond low-wage immigrant workers to all immigrants, just as it reaches most native-born Americans, because immigrants are well represented in every profession.

"Although there is often a presumption that immigrants are concentrated at the bottom of the economy, we actually see immigrants robustly represented in every part of the economy -- from top to bottom," said David Dyssegaard Kallick, a senior fellow at the www.fiscalpolicy.org Fiscal Policy Institute. "I would expect the economic downturn would have broadly similar affect for immigrants and for others."

However, he noted that many immigrants work in areas that could weather a recession, such as health care, the public sector and higher education.

James Parrott, chief economist at the Fiscal Policy Institute, shares Kallick’s view. "We are headed for a fairly sharp job loss that is likely to occur across the spectrum of industries and occupations," said Parrott. "I don't see any disproportionate impact on immigrants, but they will be hit along with everyone else."

"On the other hand, during a downturn, we may see heightened pressures to work off the books, a development that will further drive down wages and working conditions for recent immigrant workers," he added, noting that the estimated inflation-adjusted median wage in New York City dropped by 4 percent for the 12 months through June 2008 compared to the prior year.

But for Fong Oi Kan, the hair stylist in Chinatown, going to work means there is still a chance to make some money.

"Even if a lot of time I am just sitting there," said Kan, "it still beats staying at home making nothing at all."

Larry Tung, a native of Taiwan, teaches media and film courses at Kean University in Union, New Jersey. He is also a documentary filmmaker whose work focuses on immigrant and Asian American issues.Â