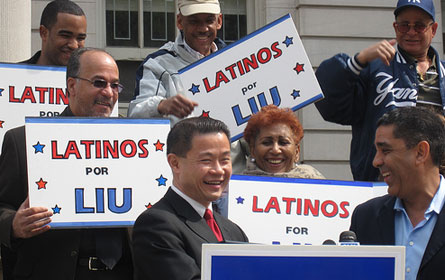 While turnout may have been low and much of the electorate disengaged, this year's city elections reflected gains for immigrants in New York. John Liu, who moved to Queens from Taiwan with his parents as a young boy, became the first Asian American to win citywide office here, becoming comptroller.

When the new City Council convenes in January, Margaret Chin, an immigrant from Hong Kong, Peter Koo, also from Hong Kong, and Ydanis Rodriguez, who was born in the Dominican Republic, will join the immigrants already on the council.

"In some ways, slow-moving New York City politics are catching up with the changing dynamics of the city itself, as the number of immigrants continues to rise and the idea of dividing the political pie three ways, among blacks, whites and Latinos, seems obsolete," the Washington Post reported.

The results came even as the Asian American Legal Defense Fund foundthat a number of Asian Americans encountered obstacles as they tried to vote. For example, the group said, some Asians trying to cast ballots in Bayside were denied language assistance. In the council racethere, Dan Halloran defeated Kevin Kim, a Korean American after a bruising campaign.

Meanwhile the economy continues to take its toll on immigrant communities, with scams against both workers and employers on the rise. The economy has affected families, too, as in many Korean families, both parents now must work. That's not the case among many Filipino immigrants though, where, in a reversal of their roles in their native country, many men stay home while their wives hold demanding and well paying jobs as nurses.

These and other stories from or partner, Voices that Must Be Heard.

Check out stories on the elections, rising crime among young Koreans, the fight to save the garment district and more from the Spanish, Chinese, Korean, and Polish language press via our partner, Voices That Must Be Heard.

John Liu's Next Step?, Sing Tao Daily
Comptroller-elect John Liu, the first Asian to win citywide office here, clearly has higher aspirations and, with his victory this fall, running for mayor is a real possibility.

New Bronx Machine Flexes Its Muscle, EDLP
With the slogan "The Bronx is not for sale," this borough's Democratic machine, headed by Assemblyman Carl Heastie, Bronx Borough President RubĂ©n DĂ­az Jr., and State Sen. RubĂ©n DĂ­az, demonstrated its incredible political power at the polls when Mayor Michael Bloomberg lost the "Borough of Salsa" by 37 percent to 61 percent.

Behind the Koo Victory, Sing Tao Daily
Running in a district where Democrats outnumber Republicans five to one, Republican businessman Peter Koo faced an uphill battle in his campaign for City Council but, according to his campaign manager, won because of his personal charisma, ability to assemble a rainbow coalition of supporters and solid background.

Once in the U.S. Filipino Couples Switch Roles, Filipino Reporter
With many Filipino immigrant men staying home to care for children while their wives work, one woman fro the Philippine reporter a common joke: "If you meet a Filipino man at the grocery store with kids in tow, especially in the middle of a working day, and you ask him what he does for a living, the common reply will be, 'My wife is a nurse.'"

Troubles Abound for Fujianese Children Returning to Brooklyn, World Journal
Many Fujianese immigrants send their infant children back to China to be raised by grandparents or relatives, but when the children reach age 4 or 5 and return to the United States to start school, problems arise.

Crime Increases Among Young Koreans, Korea Times
Recent reports from some Korean organizations indicate that Korean youth in New York are being increasingly exposed to -- and involved in -- crime. While both parents work, their unsupervised children engage in destructive or illegal behavior, such as drinking, drugs or gang activity.

Workers Call for Saving City's Garment Industry, World Journal
The city's manufacturing and garment industries have been outsourced along with the lax enforcement of city zoning laws has led to the shrinking of the garment district in New York, according to garment workers and their supporters.

Beauty Salons Without Licenses Face Penalties, Korea Times
The Korean beauty industry faces a crisis as Koreans licensed in beauty skills and operating shops in their homes face huge fines, loss of their licenses and demands for payment of income tax.

Undocumented 9/11 Workers Caught in Double Bind, El Correo de Queens
With immigration reform postponed and a health reform that does not include them, the workers who cleaned up after the 9/11 attacks find themselves in limbo as they do not know who they can trust out of fear of deportation.

Mass Held for Polish Ground Zero Workers, Nowy Dziennik
Each year, more Polish asbestos workers die as a result of work they did at Ground Zero back in 2001. In early November, families and colleagues of those who had passed away prayed for them at a Mass at St. Patrick's Cathedral, the second annual Mass commemorating the deceased members of Local 78.

New Program Aims to Reduce Attacks on Taxi Drivers, El Taxista
The attacks on taxi drivers in the city have become less frequent since the launching of a program that allows the police to randomly detain vehicles and approach passengers to interrogate and search them, with the driver's consent.

Anger Rises Over Chinatown Employment Agencies, World Journal
Reports of labor disputes between job seekers and Chinatown's employment agencies have been on the rise following the financial crisis, with immigrant looking for work charging that the agencies hoodwink them and take advantage of their lack of knowledge.

Advocates Seek to Protect Rights of Immigrants in Prison, La Voz Hispana A coalition recommends that the city Department of Corrections restrict immigration agents' access to prisoners awaiting trial, not share digital fingerprints with the Department of Homeland Security and protect the rights of all New Yorkers in prison.