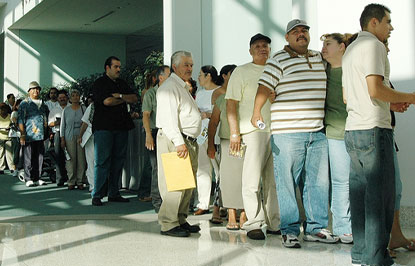 To many immigrants, the right to vote in the United States represents the full realization of their American dreams and a validation of many years of hard work and struggle. It means that they are active members of the American society and equal to native-born Americans -- at least in the eyes of the law.

This year, though, many immigrants who thought they would be able to vote in the November presidential election may not be eligible because of delays in processing their applications for citizenship. Because of a rapid rise in applications, the federal government has been taking an average of 16 to 18 months to review the applications, up from around seven months a year ago.

Even the Department of Homeland Security, which has responsibility for reviewing the applications, concedes that a problem exists. "There may be a significant number ... that have applied at this date that don't make it through" in time for the election Homeless Security Secretary Michael Chertoff told a recent congressional hearing

In an effort to pressure the administration to clear the backlog of citizenship applications by legal immigrants, the Puerto Rican Legal Defense and Education Fund (PRLDEF) in New York filed a class-act lawsuit against the Department of Homeland Security to demand that the immigration authorities to complete hundreds of thousands pending naturalization petitions in time for the new citizens to vote in November.

"It is insulting to the people who applied for citizenship," said Cesar Perales, PRLDEF's president and general counsel. "Especially after they learned English and passed the civics and history test to qualify for citizenship, they still have to wait. They should have all been ready to cast their vote as American citizens in November. ... It is very typical of the American government. They don't care about the immigrants. They don't want them to be a part of the American society."

In the lawsuit, PRLDEF demands that the U.S. Citizenship and Immigration Services, an agency of the Department of Homeland Security, process all application filed before March 26 by September 22.This would give the new citizens time to register to vote and meet the Bush administration's own goal of processing all applications within six months.

The large influx of applications is widely believed to be a result of the drastic fee increase last summer. On July 30, 2007, the fee for naturalization applications rose 69 percent, to $675 from $400. All other immigration-related application fees went up as well. Immigration officials justify the increases by noting that Congress has required that federal immigration and naturalization services be self-supporting.

Critics of the large fee hikes argue that they will place U.S. citizenship out of reach for many legal immigrants. But proponents counter that immigrants should be willing to save and sacrifice if they want to enjoy the benefits of being citizens.

Regardless of the merits of the increase, critics of the immigration agency said officials should have anticipated its effects. ""The fee hike is no small increase," said Norman Eng, communications director of the New York Immigration Coalition, an umbrella advocacy group. "So the fact they didn't expect so many people would try to get their application before the deadline. ...They only have themselves to blame for their lack of foresight."

Too Late to Vote

The backlog has affected immigrants in New York and around the country. More than 90,000 legal immigrants in New York State have been waiting for up to three years for their naturalization applications to be processed, PRLDEF said in a statement. Currently, 1.1 million foreign-born New Yorkers are eligible for citizenship, according to the New York Coalition.

In their statement, PRLDEF officials were particularly critical of the effect this could have on the election.

"We've already witnessed unprecedented numbers of Latinos going to the polls during this election season. Hundreds of thousands more are being denied that same opportunity," said Perales.

"Thousands of immigrants will be wrongly denied the most wonderful opportunity our government offers us, the ability to participate in the democratic process," said Foster Maer, one of PRLDEF's attorneys. "When people follow the rules, so should the government."

Two weeks after the lawsuit, immigration services director Emilio Gonzalez announced that his agency had lowered its projections for how long it would take to process naturalization applications. Citing the sharp increase in applications last summer, Gonzalez said the individuals who filed for citizenship during the summer of 2007 can anticipate an average processing time of 13 to 15 months, a three-month improvement from the 16 to 18 months projected in January, though far from the Bush administration's six-month target.

The immigration agency blames the Federal Bureau of Investigation for some of the delay, noting the FBI has to check all names. To address the backlog there, Citizenship and Immigration Services and the FBI announced a joint plan. The bureau said it has already dealt with all name check cases pending more than four years and by May hopes to complete all name checks pending more than three years. By June 2009, the FBI hopes to process 98 percent of all name checks within 30 days and to spend no more than 90 days to clear cases that are deemed difficult.

To speed its own processing, the immigration agency has hired retired employees and encouraged workers to work overtime voluntarily. The agency scheduled naturalization interviews on Saturdays and Sundays as well as after traditional business hours. It also plans to add nearly 3,000 new employees, place workers in offices with the greatest backlogs, quadruple the funding for overtime and use Asylum Office facilities and staff to conduct naturalization interviews.

"By the end of the year, I expect USCIS will have finished 36 percent more naturalization cases than last year without compromising national security or the integrity of the naturalization process," said Gonzalez.

But PRLDEF's Perales is not satisfied. "The review of these applications is not going to be done in time for these legal immigrants," he said. "They can't keep answering the question with the vague notion of national security."

Eng said that the government needs to send a more welcoming message. "There needs to be a commitment to immigrants and to encouraging immigrants to get involved and to be part of our civic life," he said. "The message that this backlog debacle sends is that we don't care about you. That's not the right message. That's not what this country is founded on."

Meanwhile, Gonzalez plans to step down on April 18 after serving as the director of Citizenship and Immigration Services since January 2006.

In an editorial, the New York Times said Gonzalez will leave behind a gummed-up bureaucracy and perhaps a million empty promises. "Those who know the citizenship system say it is 'dumbfounding' that Gonzalez and his agency did not foresee the surge, not only because the fees went way up, but also because 2008 is a presidential election year - always a time when would-be citizens hurry to get their papers in," reads the editorial.

Larry Tung, a native of Taiwan, teaches media and film courses at Kean University. He is also a documentary filmmaker whose work focuses on immigrant and Asian American issues.Â