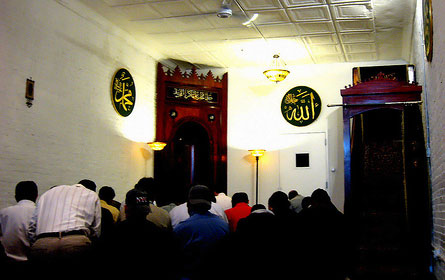 Photo (cc) Adrian Miles
Evening prayers at a midtown mosque. Many Muslim parents want the religion's holiest days to be included in the list of school holidays.

Isabel Bucaram of Astoria, Queens, didn’t want her 6-year-old daughter, Huyam, to miss her class trip to the Nutcracker ballet, but she could find no other alternative. The trip coincided with the Muslim holiday of Eid-ul-Fitr, one of the holiest days in Islam, and Bucaram wanted her daughter to participate in the day's religious festivities. "It was upsetting for her not to share in that field trip with her teachers and friends," Bucaram recalled.

Not wanting her daughter or any other Muslim child to miss out on a day of school because of a religious holiday ever again, Bucaram last winter become involved in the movement to have Muslim holidays recognized by the New York City Department of Education. Until then, Bucaram’s political knowledge had revolved mostly around national politics. But once she started working with the Coalition for Muslim School Holidays, a group of over 80 labor, community, faith, and civil rights organizations, she was meeting with City Council members James Gennaro and Peter Vallone Jr., and learning about what it takes to change policy.

Bucaram is not alone. More Muslims are getting involved in the political process than ever before, many spurred by the Muslim school holiday issue, according to Faiza Ali, community director for the Council on American Islamic Relations and a member of the coalition’s steering committee. "The issue of Muslim school holidays has mobilized the community in a great way," she said. "Across the five boroughs, community members have participated in the civic process testifying at hearings in City Hall and lobbying their elected officials, some for the first time, to support this cause."

Muslims in the Schools

The Muslim population in New York City numbers around 600,000 according to a study by Columbia University. Peter Awn, the dean of Columbia’s School of General Studies, characterizes Muslims as one of the fastest growing religious communities in New York City. Muslim New Yorkers hail from all parts of the globe, and an estimated 10 percent of the city's 1.1 million public school students are of the Muslim faith. Approximately 90 percent of Muslim children in the city attend public schools.

The movement to make the New York City Department of Education recognize the holidays of Eid-ul-Fitr, which marks the end of the month of Ramadan, and Eid-ul-Azha, which is the culmination of the yearly hajj to Mecca, began a few years ago when concerned parents like Bucaram decided that they should not have to choose between their children’s education or their religion.

This summer, the City Council's education committee voted overwhelmingly in favor of a non-binding resolution to close all public schools on Eid-ul-Azha and Eid-ul-Fitr. The full council approved the resolution in a voice vote.

Mayor Michael Bloomberg, though, indicated his opposition to the proposal. "One of the problems you have with a diverse city is that if you close the schools for every single holiday, there won’t be any school," he said last summer.

The coalition’s Faiza Ali disagreed. "Giving days off for the Eids does not mean fewer days in school," she said. She maintains that recognition of the holidays would alter the school calendar only slightly since Muslims follow a lunar calendar. Thus, the holidays may fall on a weekend, on a school holiday or during a recess in any given year, as was the case this year when Eid-ul-Fitr fell on a Sunday.

Ali acknowledged that there will be instances when the Eids will fall on what would normally be school, but said the Department of Education has various methods to close for the two holidays and not decrease the overall amount of time in school.

In Ali's view, the benefits of observing the holidays outweigh any inconvenience to the school system. "Although incorporating the two Muslim holidays would have a minimal impact on the calendar, recognizing them would help foster a better understanding of Islam and reaffirm that Muslims are an integral part of this city," she said.

Fatima Shama, the city's commissioner of immigrant affairs, who is herself a Muslim, insists the administration is still considering the matter. "This is a complex issue, and we are not taking it lightly," she said. "We have sat with the Coalition of Muslim School holidays at least three times with Deputy Mayor [Dennis] Walcott, and we have never said no. It is an ongoing evolutionary process."

Shama said that the Bloomberg administration wants to review every aspect of how incorporating the two Muslim holidays into the school calendar would affect the school system and its 1.1 million students before making a decision. "We are not doing policy on the fly," she said. Shama says she "couldn't say" when a decision about this issue would be made.

Muslims must be resolute in order to achieve victory on the holidays, according to Amy Sugimori of La Fuente, an organization that advocates for workers’ and immigrants’ rights. "They must demand an answer from Mayor Bloomberg," she said.

The New York Civic Participation Project, which works with La Fuente and other groups, played a major role in educating Muslims about voting and the political process. The project has organized voter registration drives in collaboration with neighborhood mosques in Queens and Brooklyn. Sugimori, who oversaw the voter registration drives, said Muslims "were really into the idea that they needed to be full participants in civic participation."

La Fuente's members, most of whom are of Latino descent, have shared their experiences with Muslims members. Sugimori believes that hearing the stories of how other communities overcame injustice "resonated with the Muslim community." "We have all fought to be able to vote," she said. "We all should exercise this right."

Prior to November's municipal election, the New York chapter of the Council on American Islamic Relations held 10 voter registration drives to encourage Muslims to vote and fielded calls from community members asking for information on how to register to vote, the primaries, the candidates and elections.

Shamsi Ali, the director of the Jamaica Muslim Center in Queens, spiritual leader of the Islamic Cultural Center in Manhattan and a strong supporter of closing schools for Muslim holidays is optimistic that Bloomberg will eventually come around on this issue. If Muslims register and vote, then they will be valued by politicians even more," Ali said.

"This is what I tell my kids to do. If you see something that either needs to be changed or can be improved, work to make that change -- vote, write letters, speak with those elected," said Bucaram.

Second-grader Huyam sent Bloomberg an Eid card decorated with Hello Kitty stickers and on it excitedly told the mayor how glad she was that last Eid landed on a Sunday. "If that could happen more often, that would be great!" she wrote. Huyam, along with other members of New York's Muslim community eagerly await his response.