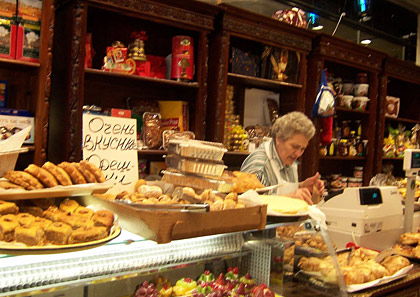 This isn't the first attempt at beefing up language services by the Bloomberg administration, but is the broadest. In 2004, he signed an executive order to bring translation services to crime hotlines. Now, all city agencies must offer language support to those who need it. The timeline for compliance and implementation, however, has not been as explicit as the order itself.

The order would benefit the over 1.8 million New Yorkers whose primary language is not English. The New York Immigrant Coalition's executive director Chung-Wha Hong applauded Bloomberg in a press release and added that "all city residents are called on to cooperate with the city in responding to emergencies, fighting crime, and complying with myriad laws, rules, and procedures. This new policy will make this two-way communication dramatically more effective."

Elsewhere in the immigrant and ethnic press this month, we look at the crisis in vending cart licenses, Islam in the subways and undocumented workers affected by 9/11. This and more from the Polish, Spanish and Chinese-language press via our partner, Voices That Must Be Heard.

Homeowners Hang on in Greenpoint
(Super Express)
While foreclosure rates climb throughout the city, Greenpoint property owners, along with those in Williamsburg, Ridgewood and Maspeth, remain relatively stable. Overall, New York City foreclosure rates, at 2,216 so far this year, are still lower than those in other urban areas such as Miami or Los Angeles.

Chronicle of Smuggling over Five Continents
(World Journal)
A Chinese man has a harrowing journey from southern China to Paris, to Cuba and Guatemala, before landing in New York. He's now ambivalent about the journey and finds it difficult to get asylum or find work.

Congressman Opposes Subway Islamic-understanding Ads
(Iran Times)
The Islamic Circle of North America is sponsoring a series of ads designed to inform subway passengers about Islam. Some 1,000 cars will carry ads that try to demystify "hot words or keywords that get thrown around a lot, but are not necessarily defined in the most proper context," says NYU's Imam Khalid Latif. Republican representative Peter King is calling for the Metropolitan Transit Authority to stop the month-long campaign, scheduled to run during Ramadan this September.

Latina Dayworkers Hurt by Economy
(El Diario)
It's getting harder for many women day laborers to find work in Manhattan's informal garment district economy. For years, the corner of 37th Street and 8th Avenue was a hub for those looking for work as clothing pressers, in warehouses and nearby factories. "The situation has gotten worse. It was easier to get hired before," one woman says.

Street Vendors Get a Little Support
(Norwood News)
A new Fordam-based group, VAMOS Unidos, is helping street vendors negotiate permits. It's tough to get a food vending permit and licenses. Food vending permits are capped at 4,100, and it's estimated that thousands - potentially even 15,000 - food vendors operate without one. VAMOS is trying to increase the number of legal permits in the city.

A Thriving Black Market for Food Vendor Licenses (El Diario)
Summer brings street food to New York City. And food vendors are fighting - and paying - to deliver it. Most vendors don't own their own permits, and often rent them illegally for two year terms at $4,000 to $6,000. "The guy who's behind the cart, who pays taxes and has a vendor's license, he's the one who should have the permit, not just get a 40 percent cut," lamented one Ecuadorean vendor.

Latinos Effected by 9/11 Not Receiving Adequate Care
(Latin Week)
Thousands of New York Latinos worked in the lower Manhattan region and participated in Ground Zero cleanup. Many are now voicing complaints about receiving inadequate equipment and protection. Many are undocumented, and find it difficult to access services.

Budget Cuts to Senior Centers Hard for Older Latinos
(Latin Week)
Senior centers, such as Casita Maria in East Harlem, serve as both community hubs and social service networks for the Latino community. With budget cuts of over $1 million, centers are cutting back on caseworkers and hot lunches. By replacing hot lunches with home-delivered frozen meals, Casita Maria's Program Director Maria Rivera is afraid that they are cutting off important emotional and social support for the seniors. "It's more than about giving them services. It's to love and understand them," she said.