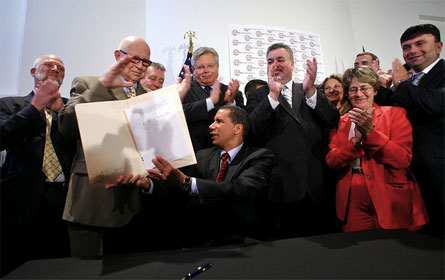 It took 10 years for the New York State legislature to pass the Dignity for All Students Act to deal with bullying in the schools. While the bill has some shortcomings, supporters at the bill signing at the Lesbian, Gay, Bisexual and Transgender Community Center in Greenwich Village Wednesday hailed the measure for having the potential to change the culture of schools and to spare thousands of children from humiliation, anger and despair.

The bill, some noted, also will be the first New York State law to protect people facing discrimination on the basis of "gender identity and expression."

To dramatize the need for the measure, State Sen. Thomas Duane, its Senate sponsor, told the story of an Ithaca mother whose daughter, the only black child in an otherwise white school, "was subjected to harsh bullying and harassment every day on the bus." He said that the school's solution "was not allowing her daughter to ride the bus. That will never happen again!"

What It Does and Doesn't Do

The act aims to do nothing short of affording "all students in public schools an environment free of discrimination and harassment." It calls such conduct "inconsistent with a school's educational mission." The new law aims to end bullying by requiring schools to adopt explicit policies to create harassment-free environments; inform students and parents about the new policies; develop guidelines for training all staff on how to develop a school culture that stops bullying; create guidelines on how to make curricula and counseling non-discriminatory; build awareness about issues of discrimination and bullying into courses on citizenship, civility, and character; train at least one staff member in human-relations counseling; and report incidents of bullying to the state education department. The act also will require the department to help local school districts implement the law by providing model policies, regulations and direct services.

The new law covers harassment or discrimination based on "a person's actual or perceived race, color, weight, national origin, ethnic group, religion, religious practice, disability, sexual orientation, gender or sex." It defines "gender" as "perceived sex and shall include a person's gender identity or expression."

Stamping out bullying may sound impractical and almost against human nature, but over the course of years of writing on this subject I have interviewed city teachers who work in schools that do such a good job of creating supportive environments for their students that the kids don't want to leave.

A group called Bully Police gives the New York law a grade of B-plus, falling short in terms of addressing cyberbullying and providing "victim counseling." Duane told those assembled at the signing ceremony that he is working on a cyberbullying amendment to the law that will be sensitive to "First Amendment issues."

The bill also does not go into effect for two more years. Udi Ofer, advocacy director of the New York Civil Liberties Union, one of the lead groups in the Dignity for All Students Coalition that pushed for the bill, told Gotham Gazette the two-year delay "is a good thing. This law is largely preventive and not punitive," he said. "School districts are going to receive model training programs for teachers, students, and administrators and model guidelines on how to prevent bullying in the first place --- not an easy task!"

In addition, that new state law only applies to public schools, one of the political compromises that was made to get it passed. The city anti-bullying law covers independent non-religious schools, but as explained below, the city Department of Education does not accept the validity of the city law.

The state measure emerged after years of debate and wrangling about what it would include and not include.

The inclusion of sexual orientation as a protected class was an initial sticking point for more conservative legislators in 2000. Many of the speakers at the bill signing -- City Council Speaker Christine Quinn, State Assemblymember Daniel O'Donnell and Duane -- are gay (and Irish for that matter). After the passage of the state’s Sexual Orientation Non-Discrimination Act in late 2002, the objections moved on to involve "gender identity and expression" covering people of transgender experience, among the most abused people on the planet.

Pauline Park, director of the New York Association for Gender Rights Advocacy and transgendered herself, was one of the most tenacious advocates in the coalition that worked on the legislation. There was a time, she said, when Republicans offered to support the bill if "gender identity and expression" was taken out. At another juncture, some legislators tried to put the words "identity and expression" before all of the covered categories including gender, but Park balked because the protection would not have been as explicit. The coalition backed her up.

The signing ceremony is "a very important day," said Park. "It is the first time legislation has been enacted in New York State that includes gender identity and expression."

Transgendered people still are not covered under the hate crimes law or the state human rights law. (The city human rights law, enacted in 2002, does cover those who are transgendered.) The state Gender Expression Non-Discrimination Act would correct that, but it failed to pass the Senate.

For the record, the vote in the Assembly on the Dignity for All Students Act was 138 to 4 and when the Senate finally voted on it they passed it 58 to 3. Makes you wonder what all the fuss was about.

Speakers at the ceremony emphasized the need for the measure, many harking back to their own experience.

Paterson, a longtime proponent of the bill from his time as a state senator, caused a bit of a ripple when he talked about how he coped with being bullied as the first blind student in his elementary school. "I hit the bully in the face with my lunch box," he said. "That is not the way to handle the problem."

Many tormented children do, on occasion, lash out. Some of the more notorious school shootings have been by bullied children. But most often, the victims of bullies become depressed, dropping out of school or attempting suicide -- sometimes successfully.

"Bullying was considered part of going to school in those days," said Paterson, noting that while the beatings pass into memory, "I never forgot the insults."

O'Donnell, the lead Assembly sponsor, noted that the category of "weight" was added recently in response to concerns about how overweight children are tortured in schools. "I was a fat kid," he said and remembers how badly he was treated at times because of that.

City Comptroller John Liu recalled his experience of being bullied as the only Asian child in his class in Queens. "You never forget the epithets and the insults. They stay with you for life," Liu said. "As a fifth grader, I went to my teacher to ask for help and was told, 'John, you are just going to have to learn to get along with the other kids.'"

Michael Mulgrew, president of the United Federation of Teachers whose members will be charged with implementing the new law, expressed his support for it. "Bullying creates fear, frustration and anger, creating an environment where children do not learn," Mulgrew said. He talked about the need to "change the culture of schools" to stop bullying "and said the law "gives us the tools to make this happen."

The enactment of the city bill provided an opportunity for some to indirectly chide Mayor Michael Bloomberg, who was not at the ceremony, for his stand on the issue.

Quinn spoke of the city version of the law, the Dignity in All Schools Act of 2004 that the council passed. The mayor vetoed it but the council overrode him. Despite that, Quinn said, “"It was not implemented into law."

Bloomberg had argued the measure infringed on mayoral control of schools and dismissed the bill as “silly.” The council did not take him to court. But under pressure from advocates, mainly the Sikh Coalition whose turbaned children are often the targets of bullies, Schools Chancellor Joel Klein eventually issued a regulation against bullying and a Respect for All anti-bullying program. That policy is gradually being implemented in the schools but is still far short of what was required under the council bill.

The city Department of Education never took the issue seriously, Liu said, adding that the state bill "makes them take it seriously. It is going to be their job to track bullying and harassment."

In March, I reported on how statistics on bullying collected by the city were scant, despite some progress on new regulations against bullying and much more training of staff on how to combat it. Sonny Singh, community organizer with the Sikh Coalition, was thrilled about the new state requirements. "Now we can tell the Department of Education that they are not complying with state law if they don't clean up their act and make what's on paper a reality so that it makes a difference."

Now, though, the work begins on making the measure work. Ofer of the Civil Liberties Union said the dignity coalition is "meeting with advocates and state education officials to create a Dignity for All Students Act implementation task force," a collaboration he called "historic."

Given that many of the advocates themselves come from the ranks of the bullied and harassed, this is their chance to make a difference and they are determined to do so.

"This is the end of the beginning, not the beginning of the end. I will make sure the task force works," Park said.

As Paterson closed the program to sign the bill, he could not resist one more dig at his former colleagues. "We are taking bullying out of the schools and putting it where it belongs -- in the legislature," he said.

Andy Humm, a former member of the City Commission on Human Rights, has been in charge of the civil rights topic page since its inception in 2001. He is co-host of the weekly "Gay USA" on Manhattan Neighborhood Network (34 on Time-Warner; 107 on RCN) on Thursdays at 11 PM.