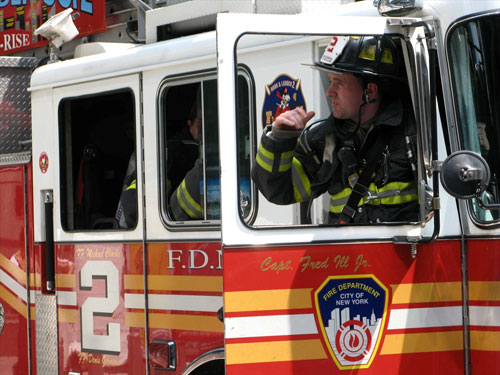 Several days later, Hines explained at Lower Manhattan's Emigrant Savings Bank on Thursday, he turned 29 -- the age limit to take the exam and start the process to become one of New York's bravest.

Hines, now 32 years old, has yet to become a firefighter -- despite his high score on the test.

"It's a bit frustrating," Hines said. "I studied for two hours a day."

Hines and hundreds of aspiring firefighters have had their plans derailed because of a protracted court case, which struck down the city’s firefighter exam because of discrimination. Because of the case, the city has not hired a firefighter class since 2007, leaving Hines and others waiting.

To give them temporary reprieve, the City Council approved legislation Thursday that would allow men and women 35 years old and younger to take the next firefighter exam. After the next exam, the age limit would go back down to 29 years old.

Council Speaker Christine Quinn said the legislation would give aspiring firefighters stuck in limbo a second chance to realize their dream.

"We listened to their unique situation," said Quinn. "This bill is intended to right a wrong."

In 2010, a federal judge in Brooklyn ordered the city to freeze the hiring of city firefighters after he found the city's exam discriminated against blacks and Hispanics.

The Fire Department is overwhelmingly white.

The federal court gave the city several options to start hiring firefighters immediately as a new exam was drafted. The Bloomberg administration rejected the choices, arguing they relied on race-based quotas.

Because of the hiring freeze, men like Hines have been sitting idle, while the department racks up significant costs in overtime.

"Once [the legislation] passes," said Hines of Brooklyn, "I can sleep good tonight."

The council approved the bill unanimously.

The Fire Department supports temporarily increasing the age requirement for the exam. But the city's firefighters union does not. The Uniformed Firefighters Association opposes the bill because, it argues, firefighters must be young. They contend the age increase would mean some firefighters could be "grandparents" and still scaling buildings under demanding physical conditions.

The proposal pricked at the soft spots of some council members, some of whom blasted the administration for not considering the federal court's options to hire firefighters now.

Others, however, sympathized with the administration.

"The [court's] decision is both arbitrary and capricious," said Councilmember Dan Halloran.

Minority members of the City Council lamented the lack of racial equity in the fire department and called for an exam that would help diversify the department.

According to the city's Law Department, a new exam is expected to be completed by the fall, despite the fact the case is still making its way through the courts.

The council also unanimously approved legislation requiring the Bloomberg administration to provide citywide data on who receives temporary housing assistance. Currently, those statistics are done piecemeal agency by agency and are not consolidated.