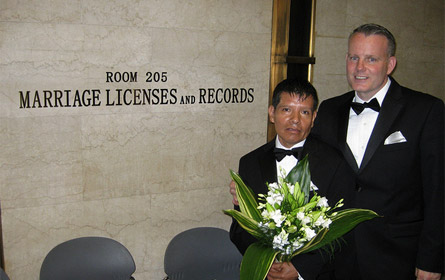 Photo by Larry Tung
John and Eufemio Torres prior to their marriage on Sunday in Brooklyn. For more photos of their wedding day, go here.

John Torres has always struggled with what to refer to his same-sex partner of four years, Eufemio, without making people feel uncomfortable. His mother calls Eufemio his "friend" and his landlord called him his "little buddy."

"I'm not 16. It's weird to call him my boyfriend," said John, 46, who legally changed his last name to adopt Eufemio's. They were married last December in Vermont, one of the six states that recognize same-sex marriage.

But this time, they are making it official in their home borough.

Both dressed in dashing tuxes, the Torreses left their house in Williamsburg early Sunday morning for the downtown Brooklyn office of the Marriage Bureau to tie the knot again.

But as they checked in, a city employee outside the Brooklyn municipal building asked to see their identifications. When they showed the worker their respective American and Mexican passports, they were told that they could not get married because of Eufemio's foreign passport. The couple refused to leave. After a few phone calls to the mayor's and city clerk's offices, they were allowed to enter the building.

"It was a few minutes of horror," said John afterward. "But we are used to it."

Once inside the building, they were warmly greeted by city workers and other couples waiting to get married. By noon, a judge had married the Torreses in Borough Hall. A champagne-and-cake reception hosted by Brooklyn Borough President Marty Markowitz followed.

"Now I am going to refer to him as my husband," said John. "It might bother some people, but that's my prerogative."

Now officially husband and husband, or spouse A and spouse B as in their marriage license application, the Torreses were happy and emotional.

"I feel vindicated. I feel that I'm on the right side of the law," said John. "There is only one kind of marriage. We are just as married as my parents." 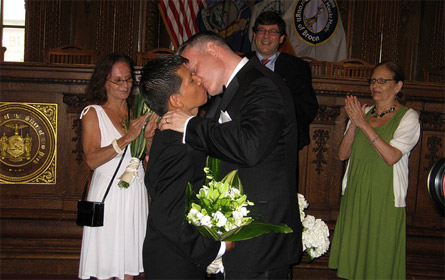 Photo by Larry Tung
Despite the ceremony, the vows -â€“ and the kiss -- the Torreses do not have all the rights of opposite-sex married couples.

Not quite. They do not have many federal benefits that straight couples do. One of the most important ones is immigration. Eufemio is Mexican and is out of status in the United States, meaning he is either undocumented or his visa has expired. Unlike a citizen married to an immigrant of the opposition sex, John cannot sponsor Eufemio for a green card because the federal government does not recognize their marriage.

Lots of other other bi-national same-sex couples remain in a similar legal limbo because their marriages are recognized by only their states. Many couples have to move overseas or be separated. In some cases, the foreign spouse continues to live here without the proper documents or tries to obtain a non-immigrant visa, such as a student visa.

In the United States, according to the Defense of Marriage Act, or DOMA, passed in 1996, marriage is only between a man and a woman. Since the federal Department of Homeland Security handles immigration matters, including whether or not to issue a green card, no foreign national can obtain a green card through his or her American same-sex spouse.

"Marriage is a state issue. Same-sex marriage is not recognized at the federal level, and immigration is a federal issue," said Erwin de Leon, a columnist on gay and lesbian issues and immigrant advocate who has worked with Immigration Equality, a national organization advocating for immigrant rights. "Foreign same-sex spouse are at risks of deportation if their status expires."

De Leon said that U.S. Immigration and Customs Enforcement, a law enforcement agency that is part of Homeland Security, is unlikely to go after these couples as long as they stay out of trouble. He noted that a recent memo issued by Immigration and Customs Enforcement chief John Morton discussed who the agency views as its priority for removal from the country, including serious felons, people who pose a clear risk to national security and public safety, those with long criminal records and individuals involved in immigration fraud.

The memo also asked immigration officers and attorneys to consider a variety of conditions, such as health, education and age. The list mentioned the individual's ties and contribution to the community, including family relationships.

"Things are happening. I am hopeful that marriage equality will be more widespread and in time, DOMA will be repealed. But nothing is going to happen anytime soon," said de Leon. "The political reality is, with all the major problems in this country like the economy and wars, this is the last thing that politicians want to talk about."

The act, though, has been challenged in a number of suits. Last year, a Massachusetts judge struck down the act. As the cases wind their way through the legal system -- probably to eventually reach the Supreme Court -- the Obama administration has stopped defending the act in court, and several weeks ago even argued strongly against it.

The effects of the Defense of Marriage Act go far beyond immigration. Same-sex couples, for example, cannot be treated as married under federal tax law. A 2004 Government Accounting Officereport found that same-sex couples are denied access to more than 1,000 federal benefits.

To address the immigration issue specifically, U.S. Rep. Jerrold Nadler of New York has sponsored the Uniting American Families Act. It would add three words "or permanent partner" wherever the word spouse appears in U.S. immigration law, opening the way for American citizens to petition for green cards for their foreign partners.

In a commentary on Politico after the bill was introduced, one of its authors, Rep. Mike Honda of California wrote: "We are a nation of immigrants, and our country deserves an immigration system that honors that legacy and supports key family values -- like keeping families intact. This act represents a giant step forward in that commitment. It provides a blueprint that respects families, strengthens our economy and fixes a badly broken system."

The legislation has been introduced in every session of Congress since 2000. This year, it has 119 co-sponsors in the House of Representatives and 21 in the Senate, a record for the bill.

Sean Yang is a native of Taiwan who came to New York to study for a master's degree in accounting four years ago. Now with his degree at hand and having passed all four required exams for the certified public accountant license, he found himself in one of the toughest job market in decades. It was especially hard for him because he needed a work permit to work legally in the United States. He was only able to find a less-than-satisfactory job at a bank. The salary is below New York's living standard.

"I understand that companies want to hire Americans first," said Yang, who lives with his boyfriend. "But if I were a woman, I could marry my boyfriend and get a green card, which would allow me to work anywhere."

Yang said he believes that the immigration rights will eventually be granted to same-sex bi-national couples. "Probably in 20 years or so, but it doesn’t help me now," he said. "I wouldn't necessarily use it. But I wish I had that option."

For the Torreses, their concerns are more pressing. Eufemio had an accident at work a few years ago and hurt his eyes. His then employers did not take him to the hospital. Now he needs eye surgery. Fortunately, John was able to add him to his health plan from work. But John worries about the worse-case scenario.

"If I die unexpectedly," said John, Eufemio would "not be able to get my social security benefits, which I work all my life to pay into. He would only be able to get what's in my 401K retirement account.

The Torreses hope that things will change but they also have contingency plans if nothing pans out.

"We are saving more money than average couples, putting money away should disaster strike," said John.

If all else fails, the Torres said they will retire to Mexico, where Eufemio owns a house and can get universal health coverage. But they said they prefer to stay in New York.