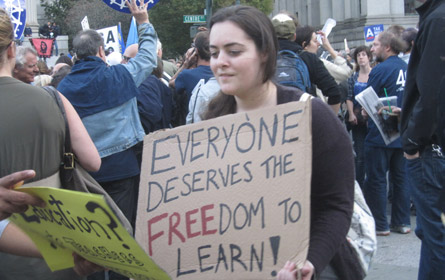 Photos by Gail Robinson
The union members and others who have joined the Occupy Wall Street protests bring their own grievances to the movement, including cuts in education and mass transit.

In the early days of the Occupy Wall Street sit-in at Zuccotti Park, one protester's sign asked "Where the f--- are the unions?"

He didn't have to wait long. On Wednesday, union representatives secured a permit for a demonstration in Foley Square followed by a march back down to the Occupy Wall Street staging ground. The groups joined forces, swelling to about 15,000 to 20,000, the movement's largest show of force to date. But more than the numbers, Wednesday's demonstration showcased the growing institutional support for the protest, spurred by individual union members who took the movement’s message to their respective leaders.

Because Occupy Wall Street's message is so diffuse, many unions found room for their specific grievances under the broader umbrella of discontent. The presence of organized labor as well as the support of local and national politicians may make it easier for the protest to gain visibility, credibility and permits for their actions.

"The students got it right," said John Duffy, national vice president of the Utility Workers Union. "The only way to get media attention is to occupy a public space for a long time."

From Individuals to Unions

Unions, whose members tend to be older and more settled in than the many 20-somethings occupying Zuccotti Park, are less likely to turn to long-term sit-ins to garner support for their cause. "Union heads tend to be conservative and fear radicalism," said Kelly Wolcott, a chapter leader with the United Federation of Teachers who teaches eighth grade English in Brooklyn.

But that mentality is changing due to inspiration from the youth. Much of the union support for Occupy Wall Street started with union members coming to the park as individuals, getting inspired and taking the message back to their colleagues, according to Wolcott.

The powerful SEIU 1199 hospital workers union said in a statement: "After the 1199 executive council heard a report on the Wall Street occupation by two of its young activists, President George Gresham offered the motion to support the action." Meanwhile, bus drivers joined the march after being angered when the police commandeered city buses to deliver arrested protesters to precincts.

"The drivers â€¦ don't support the police actions," said Willie Rivera, the division chair of the Brooklyn Bus Operators. "They put us on the spot."

Labor-affiliated members of Occupy Wall Street launched a subgroup for union outreach after the march on Wednesday, setting up their own table near under the iconic red girder sculpture in Zuccotti Park. There, members of both the protest movement and organized labor groups brainstorm about how to expand the demonstrations and attract new levels of support.

The protests target wealthy individuals, corporate leadership and politicians who, the demonstrators believe, all too often do the bidding of private interest lobbyists. But the demonstrations' audience is everyone else -- the 99 percent of us, as they like to say. The movement's main objective right now is reaching more individuals and groups across New York and the United States -- including the many million who remain indifferent and uncertain. 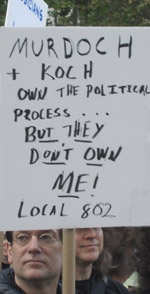 "This [demonstration] is for the people who would rather watch Monday Night football while the economy is crumbling," said Duffy.

The lack of specific demands, once cited as a liability in the press, may turn out to be an asset. This vagueness enabled the unions to find fertile ground to push for their own issues within the protests. These unions' involvement then gave more legitimacy to the movement drawing.

Members of the CUNY faculty and their union, the Professional Staff Congress, came out to protest of "crummy pay" among professors and adjunct instructors, said Arthur Cain, professor of French at Borough of Manhattan Community College. The United Federation of Teachers is alarmed about the "extreme budget cuts" at city schools and the persistent threat of layoffs, according to Wolcott, who considers this "part of a broader attack on the 99 percent."

Many school programs aimed at poorer students have gone on the chopping block federally and locally. Citing one example, Wolcott said the threshold has gone up for schools to receive funding under the federal free and reduced price lunch program. Wolcott's school narrowly missed qualifying

Budgets are also on the mind of the Transit Workers’ Union, which is concerned about the deep and repeated cuts in the Metropolitan Transportation Authority operating budget over the past two years, according to Alan Saly, the union's director of publications. He charges the transit authority has thrown its money into massive capital expansion projects and debt service, at the expense of its customers and employees, 1,000 of whom were laid off last year.

"Revenues decreased â€¦ so they have to cut the budget and they disproportionately cut operating funds,” said Saly. He added that close to 20 percent of the MTA budget goes to debt service to the MTA's bondholders. The union thinks that instead of borrowing for capital projects, the authority should concentrate on paying its workers and performing maintenance on existing train and bus lines.

Like the other Occupy Wall Street protesters, many of the union members believe the draconian cuts in transit, education and other program could be avoided if the wealthiest paid more taxes.

The rising union support for Occupy Wall Street may provide the protests with resources and political capital. Many of the larger unions have more political connection than unaffiliated demonstrators and may find it easier to secure political support and protest permits.

On Wednesday, the police department granted marching permits to the union groups but not to Occupy Wall Street. (Despite the lack of the permit, the police allowed Occupy Wall Street to march to Foley Square to join up with the unions.) The unions also were granted the use of loudspeakers, something that is not allowed for the Zuccotti Park occupiers. Protesters compensate by repeating individual announcements as a crowd to make sure that everyone hears.

Unions have also joined many local businesses in donating food and other goods to the occupiers. The SEIU has sent nurses to train protesters who staff the first aid center at the park. The National Lawyers Guild has provided legal support to the movement on two fronts: aiding arrested demonstrator and keeping the movement abreast of civic regulations that govern protests.

"They are behind [Occupy Wall Street] as a message. They agree," said Pat Walsh, a nurse from Colorado who staffs the movement’s outreach desk. "We are trying to be the voice of America."

The movement also has started to draw support from politicians, such as U.S. Demcratic Reps. Charles Rangel and Louise Slaughter of New York. "The wealthiest few should pay their fair share instead of enjoying the record profits on the backs of the middle class. The American people have had enough. They're mad as hell, and I agree," Rangel said in a statement.

Steny Hoyer, the number two Democrat in the House of Representatives also spoke well of the movement.

But Occupy Wall Street continues to avoid appealing directly to politicians and while many members of it lean left, they declined to be affiliated with any party. Multiple signs castigate billionaire Mayor Michael Bloomberg, depicting him in the clothes of a king. (Bloomberg has returned the favor, accusing the protesters of trying to "take the jobs away from people working in this city," although he said yesterday that the demonstrators could remain in Zuccotti Park.)

But President Barack Obama wasn't spared either. One protester carried a sign that read, "Barry O's 'A Nightmare on Wall Street.'"