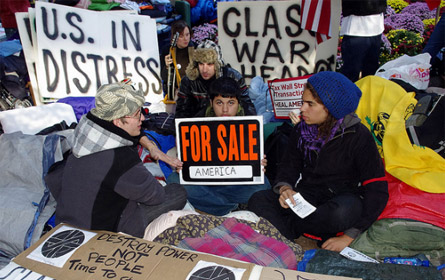 Photo by Shankbone
Protesters gather to demonstrate on Wall Street.

In the damp, pre-dawn darkness over Zuccotti Park, three thousand people were ready for a confrontation. Police vans interspersed with news vehicles surrounded the block. Volunteers with brooms hastily swept up the last of the debris in advance of the coming order to evacuate.

But the order didn’t come. At 6:30 a.m., the crowd broke into wild cheers at the announcement that Mayor Michael Bloomberg and the landlord company of the park, Brookfield Office Properties, delayed a planned cleaning session. This would have driven out Occupy Wall Street members and subsequently made it harder for them to return and assemble. Despite some scuffles and fifteen arrests at the subsequent victory march down Broadway, a big showdown was averted.The protests grew over the weekend and lead to even more arrests.

The delay, which occupiers claimed as a victory, showcased the high level of social organization and political capital the movement has amassed. The cleanup was announced on Wednesday but most protesters didn’t learn of it until Thursday, giving them 24 hours to rally the opposition.

A massive cleaning campaign by park volunteers, a call summoning thousands of supporters to the park at 6 a.m., an emergency press conference convened by City Council members and a public relations bombardment of Brookfield Office Properties all occurred in a single day, causing the company to withdraw its request and agree to negotiate with the protesters over park sanitation.

“This shows that [Occupy Wall Street] can mobilize lots of people in a short amount of time,” said Daphne Carr, a demonstration supporter.

The following day, movement supporters rallied across the United States and the world to show solidarity. Close to ten thousand people arrived in Times Square and had a tense standoff with mounted police. About 70 people were arrested throughout Saturday, including 24 people who gathered at a Citibank. Bank employees said that the protesters were disruptive but the Occupy Wall Street website says that the arrested were trying to withdraw money and close their accounts.

Bloomberg expressed displeasure with the political pressure exerted by elected officials on his weekly radio show, Friday morning. “If those elected officials had spent half as much time trying to promote the city to get jobs to come here we would a lot more ways towards answering the concerns of the protestors," he said.

Brookfield Office Properties owns Zuccotti Park but the space is open for public use as a result of a zoning agreement that the company has with the city. In exchange for making the space available, the city granted Brookfield leeway in how tall adjacent buildings can be built.

The company sent a letter to Police Commissioner Raymond Kelly, saying that the “manner in which the protesters are occupying the Park violates the law, violates the rules of the Park, deprives the community of its rights of quiet enjoyment to the Park and creates health and public safety issues that need to be addressed immediately.” The letter also said that conditions in the park have deteriorated to unsanitary and unsafe levels and tenants in nearby buildings have filed many complaints. The letter went on to ask the police to help clear the park in order to undertake “cleaning, inspection, damage assessment and repairs.”

On Wednesday, Bloomberg announced that cleanup of the park would begin at 7 a.m. on Friday. Flyers were distributed throughout the park on Wednesday and Thursday. In addition, the mayor’s office, Brookfield and the New York Police Department issued a new set of rules prohibiting laying down and bringing tarps, mattresses and sleeping bags to the park, all necessary parts of the occupation’s infrastructure.

Many protesters said that the concern about sanitation and safety was a ruse and that the mayor’s and Brookfield Office Properties’s real desire was to shut down the demonstration. “It’s farce,” said Fox James, one of the ten members of Occupy Wall Street’s own cleanup crew. “He wants us out of here.”

Bloomberg’s girlfriend, Diana Taylor, sits on Brookfield’s board of directors, prompting suspicions among demonstrators and the media that there was collusion between the company leadership and the mayor. The mayor’s office did not return calls requesting comment about this issue.

Occupy Wall Street and its supporters issued a massive call for action in response to the upcoming cleanup and eviction. Online, the group told as many people as possible to arrive at 6 a.m. and form a human barricade around the park, to prevent the police from clearing everyone out.

Attorneys from the National Lawyers’ Guild who have donated legal expertise to the protesters, sent Brookfield Office Properties a letter saying that the upcoming action “raises serious First Amendment and other legal concerns” and that “there is no basis in law for [the company’s] request, nor has [the company] cited any. Such police action without a prior court order would be unconstitutional and unlawful.” The working group asked the company to sit down and negotiate with the protesters regarding the maintenance of the park.

Council members who support the occupation who received the news on Thursday, held an emergency press conference across the street from Zuccotti Park, organized by the Working Families Party.

As WFP’s Bill Linton tried to start the press conference, a white shirt police officer stood between him and the cameras, requested his driver license and asked that Linton follow him. Linton began the press conference in spite of the request. The officer eventually stepped out of the frame. At the end, he gave Linton back his ID, saying that this could have been averted if the organizers notified DCPI in advance.

“My constituents wrote to me and said they support the protesters,” said Chin. “We call on the mayor to do everything he can to let this peaceful demonstration continue.”

A few of the council members struck a skeptical tone. “All of a sudden, the most important thing in the city is cleaning up Zuccotti Park,” said Williams. Brodsky added: “That Park has never been cleaner. If the cops are sent there, it will be to crush a movement.”

Occupy Wall Street mobilized dozens of volunteers to sweep trash, scrub and squeegee the pavement, throw out garbage and rearrange the piles of furniture and personal belongings. The volunteers worked through the night. In the morning, debris such as cigarette butts and small trash was cleared out of the space even though personal belongings still formed large, tarp-covered piles in the park. Some protesters took their things to nearby storage lockers donated by the United Federation of Teachers.

By 6 a.m., the crowd had assembled and was ready for arrests. At 6:20 a.m., the deputy mayor released a statement saying that the cleaning is postponed due to Brookfield Office Properties withdrawing its request to the city. The statement reached the demonstrators about ten minutes later, prompting a massive cheer and temporarily breaking down the crowd-powered announcement system.

A group of protesters staged an impromptu victory march down Broadway, many of them walking off the sidewalk. This prompted multiple scuffles with police who tried to control the crowd on foot and on scooters. About a dozen people were arrested in the vicinity of Bowling Green.

Brookfield’s statement said “At the request of a number of local political leaders, Brookfield Properties has deferred the cleaning of Zuccotti Park for a short period of time while an attempt is made to reach a resolution regarding the manner in which Zuccotti Park is being used by the protesters.” The company’s spokeswoman declined to elaborate further on how these resolutions would be reached.

The mayor’s office did not say whether police would enforce new regulations against laying down and using tarps and mattresses in the park but the mayor suggested in his radio program that the decision will, for now, be Brookfield’s. A police officer on the scene, who did not wish to be named, predicted that the immediate future of the protest would be business as usual. “That’s what I like,” she added.

As the morning crowds began to disperse a little, Jordan McCarthy, a member of Occupy Wall Street’s cleanup crew, leaned triumphantly on her broom. “We better get a lot of respect for this,” she said. “Revolutions begin with cleanliness.”