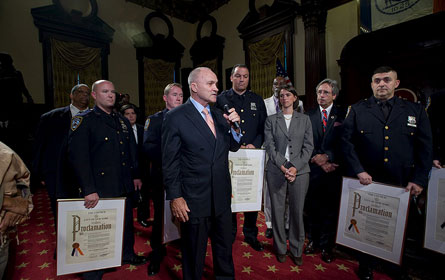 Muslim organizations last week called for the resignation of Police Commissioner Raymond Kelly and NYPD spokesman Paul Browne, the creation of a police oversight body and the retraining of 1,500 officers.

Many Muslims reacted with worry and outrage to news reports that Kelly voluntarily participated in an interview for The Third Jihad, a documentary film that purports to show the dangers of radical Islam. The film, which many Muslims called propaganda, was screened on constant loop during police training, where about 1,500 officers saw it at least once.

The news contradicted the police department’s earlier statements and letters sent to Muslim activists, in which he said that he had nothing to do with the film and that his comments were used out of context. Police spokesman Paul Browne was caught in a lie, telling the New York Times that the producers of the film never interviewed the Commissioner, shortly before a producer emailed the Times with the date and time of Kelly’s interview.

“Muslims know that there are 1,500 police officers that have this poison in their minds now. How do you think someone will feel walking down the street, looking at a police officer, thinking â€wow, I wonder if he saw that video’?” Said Linda Sarsour, a spokeswoman for the Muslim American Civil Liberties Coalition, a group of 15 Muslim organizations throughout New York.

The video raised concerns about NYPD's surveillance programs, which targeted Muslim communities. The coalition suspected surveillance for a year and a half but only saw proof following an a href="http://www.ap.org/pages/about/whatsnew/wn_082511a.html">Associated Press report which exposed the programs, which stemmed in part from a CIA operative’s partnership with the police.

Commissioner Kelly apologized on Friday, saying “I offer my apologies to members of the Muslim community, in particular, who would find the film inflammatory and its airing on Department property, though unauthorized, to be inappropriate.”

Mayor Michael Bloomberg also defended Kelly and Browne at a Thursday news conference. “Ray proudly visits more mosques than many people whose faith is practiced there,” said the mayor, adding that Kelly should not step down and he will not create any oversight body for the NYPD and that Browne was acting in good faith.

But the coalition rejected both the mayor’s statement and the commissioner’s apology as “condescending” and said they would continue trying to put pressure on city government to get their demands passed.

Cyrus McGoldrick, the civil rights manager of the New York chapter of the Council on American-Islamic Relations (CAIR) said “The concern is that he knowingly took part in a propaganda film and also the fact that he's a police commissioner of the largest police force in the world. He's listed as commissioner, not just a private citizen [in the film credits], representing NYC and our tax dollars, legitimizing a propaganda film.”

Councilman Jumaane Williams said “Mayor Bloomberg and I agree that screening an Islamophobic film to NYPD officers, particularly during antiterrorism training, was unacceptable. It would stand to reason that if he understands this, he should also understand that this is a product of this city's unjust policing culture that excuses this kind of behavior.”

The Third Jihad was produced by members of the Clarion Fund, a conservative non-profit in New York, which also made Obsession: Radical Islam’s War Against The West, another controversial film. At one point, The Third Jihad’s narrator says: “Americans are being told that most of the mainstream Muslim groups are moderate when in fact if you look a little closer you'll see a very different reality. One of their primary tactics is deception."

Clarion Fund interviewed former Secretary of Homeland Security Tom Ridge, former mayor Rudolph Giuliani and other government officials, journalists and think tank employees, some of whom are Muslim. In the film, Commissioner Kelly talks about nuclear security in New York for a little over a minute but his original interview with the producers lasted about 90 minutes.

Raphael Shore, The Third Jihad’s producer, defended the film, writing that he regrets that the film was taken out of counter-terrorism progam of the NYPD and that his “high-quality and impactful documentaries touch some very sensitive nerves.”

An Issue of Trust

Muslim activists first became aware of the film’s screening in of police training centers when a Muslim recruit brought it to CAIR’s attention in 2010. The Village Voice later put out a story in January 2011, revealing that the video played as part of the NYPD’s counter-terrorism training.

Browne issued a statement that the video played “a few times” while recruits were filling out paperwork. In reality, the video played on continuous loop between three months and one year of training. Documents received by the NY Times show that someone from the Department of Homeland Security supplied the video even though the department hadn’t authorized it.

“What else are they lying about? I'd be worried as a New Yorker,” said Sarsour.

The NYPD is still dealing with fallout from August’s Associated Press report that the NYPD had an extensive spying program set up in Muslim communities in New York City after 9/11. The architect of this program was Larry Sanchez, a former CIA agent, who worked for the agency until 2004 and was on NYPD payroll from 2007 to 2010. The CIA’s inspector general found that Sanchez operated without sufficient supervision. The agency’s top lawyer never approved sending an agent to New York. Commissioner Kelly defended the partnership.

Kelly’s opponents say that the commissioner never made time to address their concerns and only deals with handpicked Muslim leaders to make himself look better. They called for a stronger oversight body to be able to audit the NYPD, saying that the Civilian Complaint Review board is designed to focus on individual complaints instead of investigating systemic flaws in the department.

They also called for the full retraining of 1500 police officers, from rookies to lieutenants, out of concerns for the safety of Muslim New Yorkers.

“At the very least, we want that,” said McGoldrick.