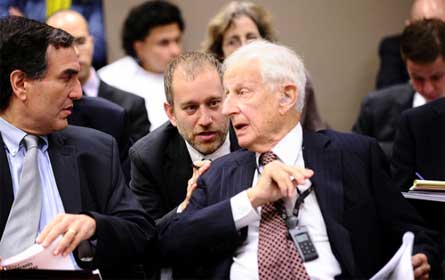 With states such as Arizona and Alabama passing immigration laws that go far beyond those of the federal government, the New York City Council weighed in on the issue yesterday and took a decidedly different stand.

By an overwhelming majority, the council passed a bill sponsored by Melissa Mark-Viverito of Manhattan that would end the Department of Correction's policy of cooperating with federal efforts to deport undocumented immigrants. The bill, said by supporters to be the first of its kind in the country, will end two decades of cooperation between the city jail system and federal immigration authorities, now called Immigration and Customs Enforcement, or ICE.

This bill, Intro 656, Mark-Viverito said shortly before its passage, "sends a strong message we will no longer be complicit in this country's broken immigration system."

City Council Speaker Christine Quinn cited another message as well. "When signed by the mayor," she said, "the entire government of New York will send a message the city of New York is supportive of, friendly to and welcoming to immigrants."

(At the meeting the council also passed two measures relating to space on city streets, one on bike lanes and one on parking. For more on those, go here.)

Under the current system, the city gives names of people arrested -- whether or not they are convicted of any crime and regardless of the severity of that crime -- to the federal agency, which then can check whether the person is here legally. If the person is undocumented, ICE can then request that he or she be detained for additional time so ICE can arrange to transfer the immigrant to a federal facility to await deportation proceedings.

Of the people detained under this system in 2010, Quinn said, almost half -- 49.5 percent -- had no prior criminal record. She estimated that some 1,000 to 1,500 people deported in 2010 would not have been detained if the measure passed yesterday had been in effect.

Overall, according to council, 13,295 people born outside the United States spent time in city jails in fiscal year 2010. ICE took custody of 2,522 of those people for possible deportation.

The bill singles nine categories of people, including possible terrorists, whose names would still be turned over to ICE. In Quinn's eyes, this removes any public safety concerns.

The bill now goes on to the mayor, who in a reversal of previous policy, is expected to sign it.

In response to criticism of the cooperation earlier this year, the mayor's office maintained helping ICE improved public safety. John Feinblatt, the mayor’s chief policy advisor and criminal justice coordinator, went so far as to write a letter to the Times raising the specter of terrorism. "As our country has learned tragically, when government agencies fail to cooperate and share information, not only is public safety compromised, so is national security," he said.

With more than 30 City Council members, including Quinn, supporting a change in the policy, the issue seemed sure to incite a rare public clash between the Bloomberg administration and the council. But in October, the mayor changed his position, indicating he would support a bill limiting the cooperation with ICE. Feinblatt then told the Times that the council bill "strikes the right balance."

The Bloomberg administration "truly came around in offering their support," Mark-Viverito said.

Some council members, though, have doubts. Four members voted against the bill though only one â€“ Peter Vallone of Queens, who has emerged as a frequent opponent of Quinn's policies in recent months, spoke out against it.

"This will make us less safe," Vallone said, faulting the measure for not making a distinction between violent crime on one hand and less serious offenses, including misdemeanors on the other. Under it, he said, a man recently arrested for assaulting a woman would have been released. "With this law," Vallone complained. "this groper would be out on the street groping our women."

As the vote drew to a close, Councilmember Lew Fidler weighed what he saw as pros and cons. "The immigrations system in this country is badly broken," he said and so, "in an effort to be compassionate and fair, â€¦ we will be endangering public safety."

Having said that., Fidler said, he would abstain in protest of federal immigration laws.