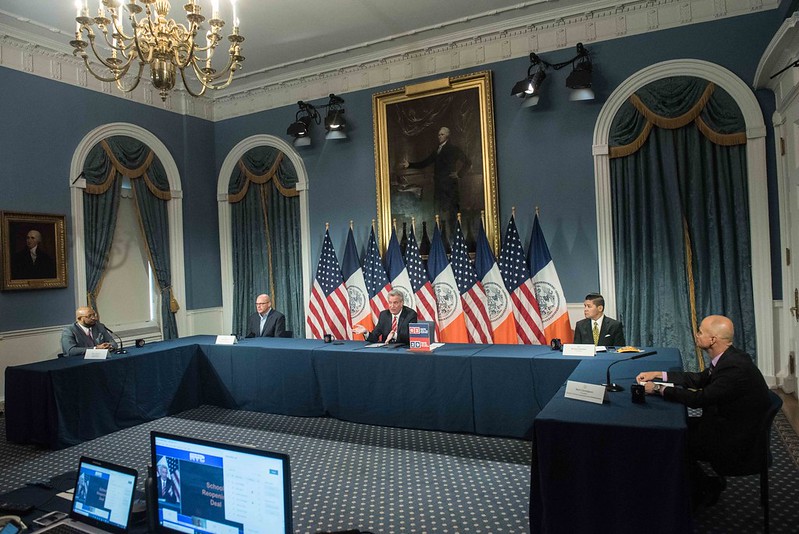 School reopening has been a particular challenge for women in New York City. From lack of communication between the Department of Education, staff, and caregivers, constantly changing schedules, failure to invest in a care economy that values domestic labor and childcare, lack of tech support, and lack of funding to the daily demands of remote learning and the material conditions in schools, women have been hit hardest by the struggles our schools face.

As we think about how our city and school system can begin to recover from this ongoing crisis, one thing is clear: We need to both elect more women and systematically encourage women to lead.

As an early childhood elementary school teacher and an organizer and candidate, we’ve seen first hand how women in school communities have been disproportionately burdened with adapting to schooling during the pandemic. This disproportionate burden isn’t new, but COVID-19 has exacerbated gender inequities in schools, the home, and other workplaces.

Yet the vast majority of school-based workers — teachers, social workers, service providers, cafeteria staff, paraprofessionals, guidance counselors, nurses — are women. These stakeholders have been consistently excluded from decision-making, even as they are being asked to nurture children with inadequate support amid a deadly pandemic and during a traumatic, unjust, emotional rollercoaster.

The Department of Education surveyed employees just once during the last nine months, and United Federation of Teachers (UFT) leadership has not solicited systematic input from members at all. Because the majority of school workers are women, many are teaching or providing services while also caring full-time for their own children and dependent loved ones at home. Many school-based staff have also taken on brand new roles this year with little support, requiring countless hours of unpaid overtime, in stark contrast to city workers in unions dominated by men like the NYPD, where there is no such thing as working without pay.

Likewise, the burden of childcare and navigating hybrid and remote learning has largely fallen on women across the city, exacerbating already existing gaps. Mothers, aunts, and grandmothers are largely the ones supporting their children with remote learning while still balancing work and other responsibilities. This burden has fallen most on Black and/or immigrant families whose children are in remote cohorts at higher rates than white families, whose communities have been hit hardest by COVID-19, and who often have to overcome language barriers with little support from the Department of Education. Inexcusably, the mayor has had no plan to make remote learning better or more accessible to fully-remote families, despite widespread criticism. In the face of increasing agitation from parents and educators, the mayor and the chancellor only recently announced the framework of a new plan.

To make matters worse, many working women who are also caretakers tasked with supporting children through remote and hybrid learning have been relegated to an inequitable and indefinite hardship by the burdens of unemployment or workplace protections that don’t prioritize a care-based economy.

Our city’s COVID-19 recovery urgently requires a legislative agenda that recognizes women’s paid and unpaid work — during this pandemic and beyond — as worthy. Our city must close the gender wage gap; adequately fund childcare and childcare providers; divest from policing and fully fund our public schools so that every school has at least one nurse, counselor, and social worker; compensate family-based and early childcare educators; proactively solicit input from educators, school-based staff, and parents about school reopening, remote learning, and in-person learning on a regular basis; give all educators ample additional planning and collaboration time whether they are remote or in-person; and invest in CUNY campus childcare.

We imagine a city where decisions are made centered on care, in its fullest form, where parents and school staff are at the table and their voices are heard, where the labor of caregivers — whether teachers, parents, service-providers or health workers — is celebrated, funded, loved, and valued.

As we approach the 2021 elections in New York City, we have an opportunity to prioritize childcare, education, and gender equity to ensure our recovery from covid doesn’t leave women even further behind. To do so, we can start by making sure our leaders understand the disproportionate impact this pandemic has had on women. It’s high time we elect more compassionate, bold women who have been doing the work of caring for communities.

***
Shahana Hanif is an organizer and candidate for City Council in District 39 in Brooklyn. Liat Olenick is a public school teacher, advocate, and activist leader. On Twitter @ShahanaFromBK & @Liat_RO.