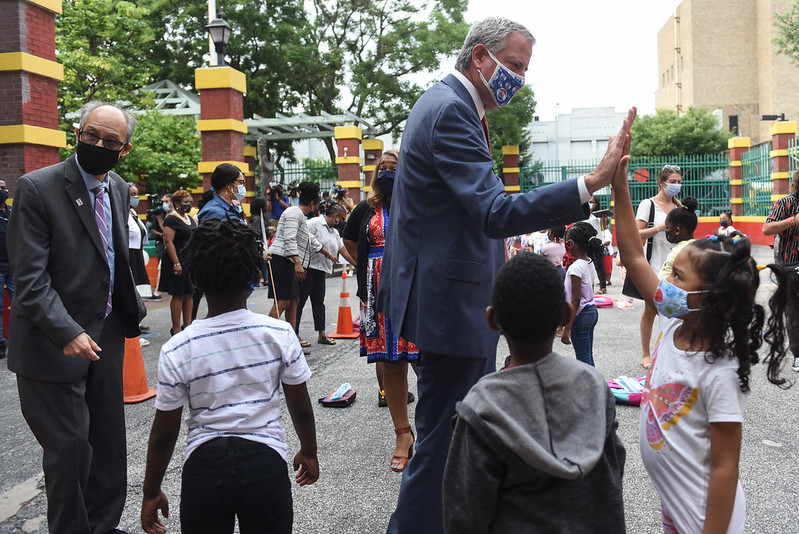 Despite New York City Department of Education officials’ claims during this past week’s City Council hearing that the city’s school reopening plan for this fall represents “the gold standard,” the reality is that the plan is riddled with profound flaws.

First, and perhaps most egregiously, the DOE refused to dedicate a single penny of the additional $8 billion in federal and state education funds to lower class sizes, despite the City Council advocating for $250 million to be spent for that purpose, and despite DOE’s own surveys showing that smaller classes are the top priority of K-12 parents.

In place of the $250 million the Council proposed for this purpose, the DOE allocated only $18 million for a small program targeting 72 elementary schools, while encouraging principals to use the funds for push-in teachers rather than actually forming new classes to lower class sizes. This could lead to more overcrowding and an even less safe classroom environment and would not have the same positive impact on learning.

The DOE’s refusal to specifically allocate any of the additional $530 million in state Foundation Aid funds for smaller classes is especially flagrant because these funds resulted from the Campaign for Fiscal Equity decision. In this case, New York’s highest court concluded excessive class sizes denied New York City students their right to the sound, basic education guaranteed under the state’s constitution, yet class sizes have risen since then. Further, if principals choose to use Contracts for Excellence (C4E) funds for this purpose, they will actually be forced to spend 40% extra to cover teachers’ pension and benefits, which DOE usually pays for centrally.

The second major flaw in the DOE’s plan is that unlike most other districts, the DOE has refused to offer a remote learning option to New York City students, unless they fall into one of a limited number of vulnerable health categories. This is despite the advocacy of many parents, elected officials, and organizations who have been clamoring for a remote option.

This is particularly troubling because the DOE’s planned safety precautions are simply insufficient.  While universal masking will be required and all school staff will (eventually) be vaccinated, the three feet of social distancing that the DOE has said would be provided at most schools will be impossible to implement at most schools, unless many students do not attend classes in person.

Then the DOE altered its calculations by allotting less space per student in its formula, while also assuming principals’ offices and other administrative spaces could be used as classrooms. Frankly, this is highly unrealistic. The DOE now claims only about 50 of the most overcrowded schools will not be able to achieve social distancing, but they have refused to release this list of schools or say what these schools will do to avoid unsafe overcrowding.

Rather than finding additional space by leasing closed parochial school buildings or moving more pre-K classes into community-based centers, the DOE has continued along its customary track for the last year and a half, pretending the need for social distancing does not exist.

Since March 2020, the city has co-located 26 additional schools in existing buildings, and tried to close an entire elementary school in the Bronx that was able to achieve social distancing, unlike overcrowded schools nearby, with plans to leave the building empty – until community and parent protest stopped it.

Throughout the pandemic, the Department of Education has also continued to expand the number of pre-K and 3-K students in elementary school buildings. According to our analysis, about 230 elementary schools with pre-K and/or 3-K programs were already at or over 100% capacity. This fall, the DOE is adding 26 more 3-K programs to already overcrowded schools – despite the fact that this space could have been used to provide a safer environment for the rest of the student population.

In its new health and safety protocols, the DOE claims, “every classroom across New York City has been provided with two HEPA purifiers,” though many dispute this statement’s accuracy. While the CDC and most independent experts recommend air cleaners that use HEPA filters, the Intellipure model that DOE purchased for $43 million lacks these filters. Indeed, independent experts rank the model among the most expensive and least efficient on the market.

But the biggest disappointment is the laxity of the DOE’s covid testing plan: only 10% of unvaccinated students whose parents have submitted consent forms will be tested – and then, only once every two weeks. This represents a sharp decrease in covid testing compared to last year, when 20% of all students were tested weekly. The loosening of the covid testing protocol in schools is indefensible, given that the Delta variant is far more transmissible and there will be far more overcrowding in classrooms, lunchrooms, and other spaces as fewer than 40% students attended school in-person last year. In addition, school-age children currently have the highest covid positivity rate in the city.

The DOE’s new protocol also does not require quarantining or testing of vaccinated students or staff. Yet with Delta, breakthrough infections are on the rise. During the first week of August, here in New York City alone, there were nearly 3,000 reported breakthrough infections,. Many times that number were likely asymptomatic and able to transmit the virus. Given these facts, excluding vaccinated teachers and students from random testing seems extremely unwise.

The DOE’s extremely limited testing regimen is also not aligned with the CDC recommendations, which advise weekly testing for students in moderate to high transmission zones.

According to the CDC tracker, every New York City borough is currently a high transmission zone, ranging from 2.7% positivity rate in Manhattan to 4.8% in the Bronx.

As reported in the Washington Post, a new study projects that testing half of all elementary school students every week would substantially reduce schools’ expected covid infection rate after three months from 49% to 22%. One can assume the rate would fall even lower if all students were tested weekly instead. 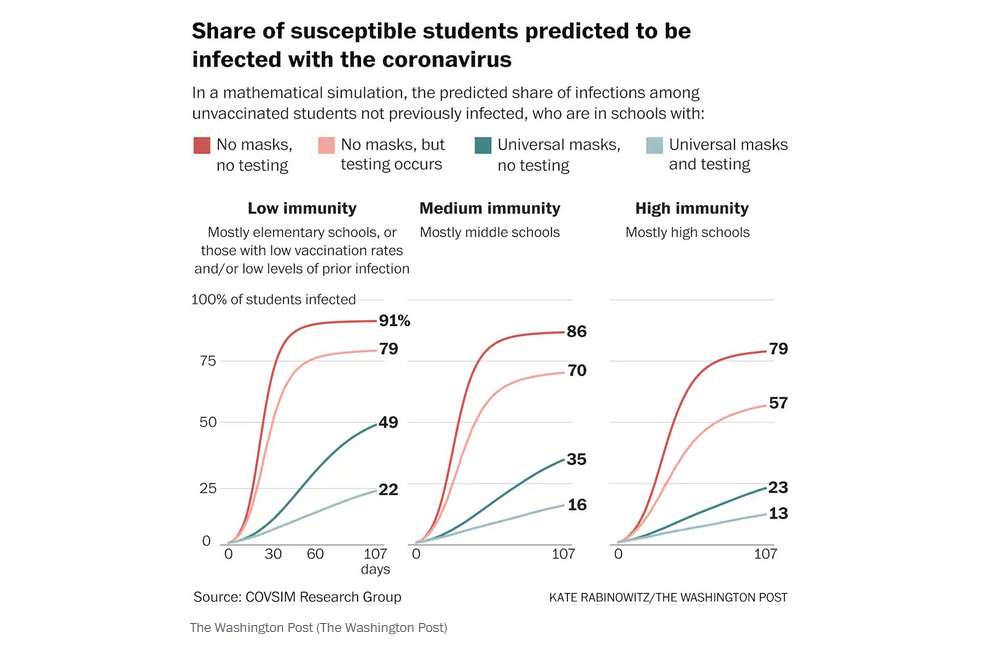 The Medical Advisory Group (MAG) of Newton public schools in Massachusetts is headed by Dr. Ashish Jha, Dean of the Brown University School of Public Health. This group also recommends weekly testing for all students and staff, and points out that if all asymptomatic students who are in close contact with infected individuals are given rapid tests, they might not have to be quarantined, which would be very helpful for preventing further disruptions to their education. They also recommend that all eligible students be mandated to receive vaccinations, as at least one California school district is doing.

The inadequate testing protocol that New York City has adopted is even more disappointing considering that the federal government has promised to cover the full cost of staffing and covid testing for any school district that requests it: “FEMA will fund 100% of COVID-19 testing costs and will not require non-federal matching funds through December 31, 2021.” Accordingly, Los Angeles expects FEMA to pay for most of the expense of its ambitious testing program.

While the New York City DOE’s Covid testing regime is inexplicably weak, the city is mandating more standardized testing to be given at every school across the city, at a cost of $36 million – twice the amount it is spending to hire push-in teachers or lower class sizes. According to a DOE instructional manual sent to principals, these formative assessments will be required to be administered to all students three times a year, including Acadience in grades K-2, and either MAP or iReady online exams in the other grades. If schools want to use different exams, they must be approved by the DOE central office first.

Yet there is little or no research showing these standardized tests will help students learn or support their recovery. Few if any independent peer-reviewed evaluations have offered evidence for their validity or demonstrated that their use has any positive impact on student learning. One of the few randomized studies showed that administering the MAP exams had “no significant effect” on achievement. Many teachers have critiqued iReady exams, and many students despise them.

The DOE’s insistence that schools require every student to take these exams at least three times a year also belies the claim in their instructional manual that they will be focusing on “creating and sustaining school cultures where students, staff and families can experience joy and thrive” this year, by creating a “welcoming and affirming school environment.”

If the DOE really wants to ensure a more successful and safer school year, rather than require more ineffective and stressful standardized testing, the city should provide smaller classes and employ more rigorous health and safety protections, including weekly covid testing for all students and staff.