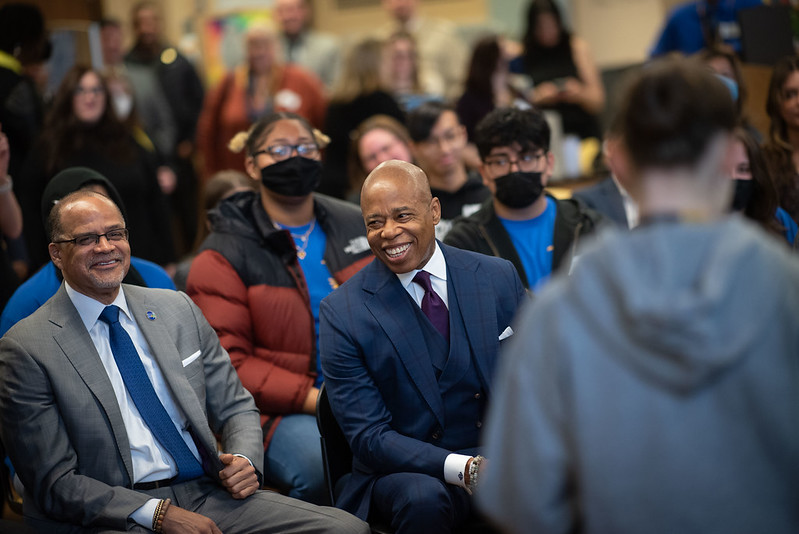 Last week, community school districts across New York City submitted their plans for the schools chancellor’s new, unimaginative Gifted and Talented program. Last month, the Department of Education announced that superintendents would work with local Community Education Councils to determine the sites for third grade G&T programs in their districts. While Chancellor David Banks, with support from Mayor Eric Adams, who appointed him, has claimed to value “authentic parent, family, and community engagement,” the reality on the ground is quite different — a return to top-down, authoritarian education politics.

G&T programs took root in New York City in the 1970s, largely to create a separate learning track for white, middle-class families. Lacking specialized curriculum, or specialty-trained teachers, the lure of most G&T programs is that students will be educated in more homogeneous classrooms — classrooms with few to no Black or Latino children, Black or Latino teachers, children in temporary housing, children with disabilities, English language learners, or children in foster care. Over the last several years, a number of schools and districts have phased out G&T programs in an effort to desegregate classrooms.

One of the highest-performing districts in New York CIty, Brooklyn’s District 15, began phasing out G&T programs in favor of the Schoolwide Enrichment Model several years ago following a large-scale community engagement process. Yet, Chancellor Banks does not seem to be allowing districts to opt out of third-grade G&T, undoing years of progress, and seemingly ignoring the role that G&T programs play in cementing racial segregation in our schools.

Since the State Legislature granted the New York City Mayor full control of our schools two decades ago, every mayor has tinkered with G&T policy. A political lightning rod issue, each administration attempts to make G&T a little less racist without antagonizing the white middle class families that the program was created to serve.

Mayor Bloomberg centralized G&T admissions, moving from admissions hinging on IQ tests and teacher recommendations to admissions being based on standardized test scores. At the time, the city was under investigation by the Civil Rights Office of the U.S. Department of Education, and data clearly indicated G&T programs did not enroll proportionate numbers of Black and Latino children. Not surprisingly, standardized test-based admissions reduced the number of Black and Latino students further and eventually led to some districts phasing out G&T programs completely due to lack of enrollment.

Despite his rhetoric about undoing the tale of two cities, Mayor de Blasio continued testing four-year-olds for Kindergarten G&T (a practice not supported by education experts) and initiated new third-grade G&T programs in districts that did not offer them (Districts 7, 12, 16, and 23). These programs admitted students based on teachers’ evaluations of second-graders. His political anxiety about overhauling G&T ran so deep that he attempted to continue the testing of four-year-olds in the midst of the pandemic. This failed only because the City Board of Education (a.k.a. Panel for Educational Policy) voted down the contract for the testing company, citing the gross racial inequities that would have been exacerbated under his plan.

After the Panel for Educational Policy voted to reject the G&T testing contract in January 2021, Mayor de Blasio, in his last months in office, finally began the planning process for reimagining G&T.  After a series of community engagement events, the mayor and Department of Education unveiled “Brilliant NYC,” which would have replaced G&T programs with the school-wide enrichment model. We were relieved to see the DOE moving in the right direction. But this was short-lived.

While the politicians tinker with G&T policy under the pretense of “education reform,” our children and our schools suffer. I am a father of four children, both former and current public school students. All my children have had or still have Individual Education Plans and the youngest has dyslexia, requiring a great deal of advocacy. I have been a community leader in Bedford-Stuyvesant for decades and have served on the Community Education Council District 16 since 2014.

In my district, Bloomberg’s G&T policies resulted in the loss of its lone program. Parents and community leaders advocated for years to bring back the program until in 2016 Schools Chancellor Carmen Fariña announced the creation of a third-grade G&T program in my district without parent input. This too failed, in large part because families were unwilling to uproot students to attend a new school in third grade, particularly when the school was farther away.

As a community leader, I am angered by the detrimental effects of G&T in my community, and the unwillingness of political leaders to confront the problem head-on. We have been advocating for a high quality program in our district for years. When Chancellor Fariña implemented the third grade G&T program in my district, we urged the DOE to properly resource the program with teachers certified in G&T and professional development. Yet, resources did not come with the new program, which was one of the reasons for its failure.  We then began advocating for the school-wide enrichment model as well as more investment in our schools to right the historical disinvestment. To date, there is no indication that the DOE is making real investment in my community.

Historically, G&T programs in less affluent neighborhoods, like Bed-Stuy and Brownsville, were thrown together to create the appearance of fairness, while never receiving the resources and support needed for successful implementation.

For over a year, I sat on the School Diversity Advisory Group convened by Mayor de Blasio, whose recommendations included replacing G&T with the school-wide enrichment model to give every student an enriched education. More than two years later, although flawed, the former mayor and his Department of Education announced the “Brilliant NYC” plan, which resulted in a lengthy set of recommendations to replace G&T with universal enrichment. But it was announced with so little time before the end of de Blasio’s tenure that he could not implement it and Mayor Adams scrapped it.

Seemingly ignoring the complexity of issues surrounding G&T, Mayor Adams and Chancellor Banks announced the program's expansion instead. Citywide, their grand vision will impact about three kindergarteners and about 30 third-graders in each district, continuing to build on the legacy of separate and unequal schools in New York City.

I question how this expansion can be promoted as ending “the era of scarcity” or aligns with any of the four pillars of Chancellor Bank’s educational framework. Labeling a small group of students “gifted and talented” does not “reimagine the student experience” (pillar one) for the remaining 95% of students and will continue to instill a sense of inferiority in those not selected for G&T. Expanding a program that has failed in District 16 is not “scaling, sustaining and restoring what works” (pillar two). We need resources for all our students in District 16 to address the traumas of the pandemic and increase in violence due to decades of disinvestment in my community exacerbated by all COVID-19 has wrought.

Expansion of G&T is not “prioritizing wellness and its link to student success” (pillar three). Finally, disrespecting my community’s position is not “empowering families to be our true partners” (pillar four).

To my community, which has suffered from historical disinvestment, the G&T expansion is an example of yet another mayor claiming to know what is good for my community. It is another piece of evidence that mayoral control of the school system must end.

Central Brooklyn was the center of the movement to establish “community control” of schools in the 1960s. The movement was very much about empowering Black Brooklyners for self-determination in education. We will not settle for a few more crumbs thrown our way to quiet us and will continue to fight until every child has a whole loaf of bread. The State Legislature must create a school governance system that shares responsibilities and accountability with parents. We are tired of hearing empty promises that are nothing more than PR soundbites. Our children cannot wait any longer.