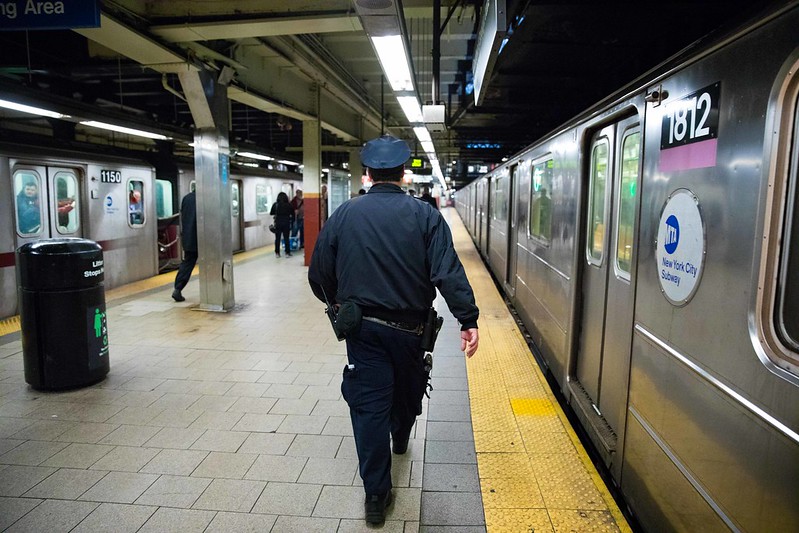 If you’ve ridden the subway recently, you could be forgiven for feeling watched. The MTA’s fare evasion crackdown is ubiquitous; subway cars are plastered with phrases like “We’d rather your $2.75 fare than your $100 fine.” Governor Cuomo’s surge of 500 NYPD and MTA cops has increased police presence in the transit system noticeably. In response, hundreds of people protested in January in Grand Central station, activists jumped turnstiles en masse, and New Yorkers are using social media to alert fellow riders to police presence in subway stations.

The crackdown should concern New Yorkers, because fare evasion enforcement is highly disproportionate. According to the most recent NYPD data, 92% of the 481 fare evasion arrests in the fourth quarter of 2019 were of non-white riders; 60% were black. Data like that led New York Attorney General Letitia James to announce a probe of racial disparities in fare evasion stops. For all this, the MTA is projected to lose money, spending $249M on new officers to recover $200M in fares, though the cops are also said to be for other purposes, like combatting robbery and assault, including on transit workers.

While the fare evasion crackdown is now familiar to straphangers, what might surprise some New Yorkers is that it isn’t just jumping the turnstile or committing more serious crimes that can get you arrested on the subway. Under New York state law, violating the MTA rules of conduct is punishable by up to 10 days imprisonment. As the New York Times has reported, this means that putting your feet up on a seat could land you in jail.

Other offenses include carrying open liquids, walking between train cars, playing music on a stereo, or carrying an animal outside of a container. Getting arrested for taking up an extra seat is probably not something most subway riders worry about, but the infrequent use of these laws does not lessen their serious consequences. For immigrants, a police encounter on the subway could be a first step toward deportation.

Fortunately, there are other ways to protect the transit system’s revenue stream and promote orderly conduct without jeopardizing the personal liberty of riders. In Washington, D.C., the city council voted to decriminalize fare evasion, overriding the mayor’s veto. That does not mean that jumping the fare gate in the capital no longer carries any consequences. Rather, fare evaders are subject to a civil fine of up to $50. What got less attention is that D.C.’s reform also decriminalized smoking, eating, littering, playing music, carrying animals, and more on the Metro. Those offenses too are punishable by a $50 fine. Another model New York could adopt is that of Portland, Oregon, where fare evaders are now granted 90 days to resolve their cases out of court.

Law enforcement in New York City has recognized that fare evasion prosecutions do not advance public safety. In 2017, Manhattan District Attorney Cy Vance announced that he would not prosecute subway fare evasion, unless there is a “demonstrated public safety reason to do so.” That is a good step, which recognizes that public safety resources are best prioritized on other matters. However, it leaves the door open to arbitrary enforcement, still requires offenders to participate in a diversion program, and widens enforcement disparities with the outer boroughs. It also calls into question the rationale for continued fare evasion arrests at all.

Legislators in Albany should follow the lead of these other jurisdictions, and repeal criminal penalties for both fare evasion and violating the MTA rules of conduct. This would not be an invitation to bad behavior, but it would make the punishment for these offenses far more proportionate. New York City has already had great success with this approach in other areas. Under the city’s Criminal Justice Reform Act of 2016, offenses like public urination, carrying open containers of alcohol, violating park rules, littering, and making excessive noise now carry civil, rather than criminal, penalties in most cases. That change resulted in tens of thousands of fewer criminal summonses being issued, and over 644,000 outstanding arrest warrants being dismissed.

If we want to meaningfully reduce mass incarceration, and make our society less punitive, we must not think of the criminal law and incarceration as the only tools to enforce rules. Decriminalizing public order offenses on the transit system would be an important step in that direction. Being poor should not be a crime, either. Fixing the subway cannot just be about improving arrival times, it must also include doing justice for all New Yorkers who rely on it.

***
Sam Rubinstein is a law student at the University of Michigan. On Twitter @Sam_Rubinstein.