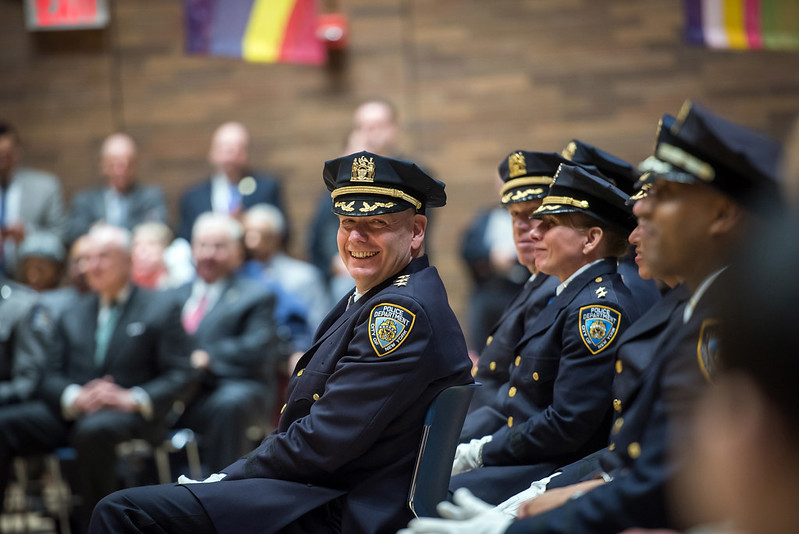 On September 16, 1992, roughly 10,000 demonstrators filled City Hall Park in a protest over police accountability. Marching around the park with banners and signs, they expressed their anger at New York City Mayor David Dinkins. After less than an hour, the protesters broke through the barricades around the park, storming the steps of City Hall itself, while another group of protesters filled Murray Street to listen to speakers who urged on the crowd.

A short while later, approximately 2,000 protesters marched onto, and occupied, the Brooklyn Bridge. They stopped traffic in both directions and assaulted members of the press trying to cover the story.

In stark contrast to the George Floyd demonstrations, there were no mass arrests that September day. No officers in riot gear “kettled” the crowd before storming them. There was no outburst of furious baton-swinging. No shower of tear gas or rubber bullets.

What was it that made this protest different? How do we explain the restraint, even the sympathy, with which the NYPD confronted the protesters?

The protesters were police officers.

The demonstration that took place that September was organized by the Patrolmen’s Benevolent Association after Mayor Dinkins proposed an all-civilian police misconduct review board. Citizen-activists had been demanding a civilian review board to exercise police oversight since the 1940s. Though pressure mounted after each incident of police brutality—from the 1943 shooting of Robert Bandy to the killing of James Powell in 1964—the PBA fought off complete civilian oversight. When Mayor Lindsay modified the existing police-controlled review board in 1966 so that civilian appointees would hold the power, the PBA launched a successful campaign to defeat the changes through fear-mongering and a ballot referendum.

With Dinkins’ proposal, members of the NYPD were confronted with the real possibility of the civilian oversight and accountability they had so long resisted.

Police unions responded as they always had—by trying to kill the reform and maintain their power. The 10,000 off-duty police officers who demonstrated in lower Manhattan that September 1992 day was a show of force, a message that the city could have a review board or a police force, but not both. As the signs some officers were carrying that day threatened, there might be “No police!” if they did not get the “justice” they demanded.

Though Mayor Dinkins argued that the protest proved the need for civilian oversight, other prominent leaders seemed unconcerned. Despite demonstrators who were drinking and mounting cars, as well as uniformed officers who made little attempt to control the crowd, “law and order” advocates were largely silent. They did not decry the actions of protesters or proclaim that lawlessness was taking over the city. Indeed, mayoral candidate Rudolph Giuliani, a former federal prosecutor whose future administration would fiercely promote “zero tolerance” policing, took part in the protest himself. Philip Caruso, the PBA president, called for understanding the protesters’ actions. Though Caruso conceded “the emotional level did get a little out of control,” he pointed out that “sometimes if emotionalism is not evoked publicly, the responsible elements of the community do not listen.”

The police department’s contrasting responses to the 1992 PBA protest and the recent Black Lives Matter protests are revealing. Rhetoric to the contrary, the NYPD’s crackdown on protesters last month was not about maintaining public safety. It was—like the PBA protest of 1992—about power and control. Attacks on protesters were made in the same spirit with which police lashed out against a civilian review board in 1992. It was an assertion that citizens dare not question the police, nor demand changes. You either take policing as it is, or you might not get it at all.

This sense of entitlement to absolute authority is part of the broader problem of police culture in New York City and the United States. It is a culture that resists public accountability and rejects  the legitimacy of external oversight. It is embodied in the “No Justice, No Police” signs that off-duty NYPD members carried that day in 1992, in the “Whose Streets? Our Streets!” chants heard from St. Louis police while citizens protested the not-guilty verdict in the 2011 police killing of Anthony Lamar Smith, and in bumper stickers emblazoned with the ultimatum “If you don’t like us, don’t call us.”

The 1992 anti-oversight protests were not an aberration, as the New York City PBA has continued to resist accountability and oversight. In 2013, in an attempt to end racially discriminatory stop-and-frisk policing, the New York City Council passed two accountability measures collectively known as the Community Safety Act. The PBA vehemently opposed the new laws, which were passed over vetoes by Mayor Michael Bloomberg and established an independent inspector general for the NYPD and made it possible for individual citizens to sue the department for discrimination. The union subsequently sued the City Council to overturn the laws while also suing to overturn a 2013 federal court decision that ruled the NYPD’s stop-and-frisk practices unconstitutional.

Throughout the last decade the PBA also repeatedly invoked Civil Rights Law 50-a to restrict public access to body camera footage and the outcomes of administrative trials. Though filing lawsuits and expansively interpreting legal codes may be tactically different from the 1992 City Hall protest, resisting oversight has remained the strategy.

In addition to taking legal action the PBA has continued to operate in the political arena to forestall oversight. In 2019 the PBA launched a “vote no” offensive against a series of ballot measures designed to strengthen the Civilian Complaint Review Board. Under the proposed changes police commissioners would be required to submit an explanation to the CCRB if the commissioner rejected the board’s disciplinary recommendations. As part of their campaign against the new accountability measures the PBA stoked fears over rising crime, claiming the new accountability measures “will make the city less safe.” In doing so, the union drew on a rhetorical pattern linking the potential for increased crime with increased oversight. Speaking to the New York Times in 1992 about the Dinkins administration’s reform efforts, PBA president Phillip Caruso predicted “crime is going to get worse, the streets will become less safe than they are.” Such rhetoric represents another tactic in the fight to delegitimize oversight and accountability.

There has been significant debate in the last few weeks over whether problems in policing reflect a few “bad apples” or a more deeply rooted, flawed system. The contrasting ways police have responded to protests and proposals over their authority shed light on the systemic problems. Dismantling a culture that demands unlimited authority and resists virtually all oversight is necessary if we are ever to move toward a more equitable system of justice in this country.