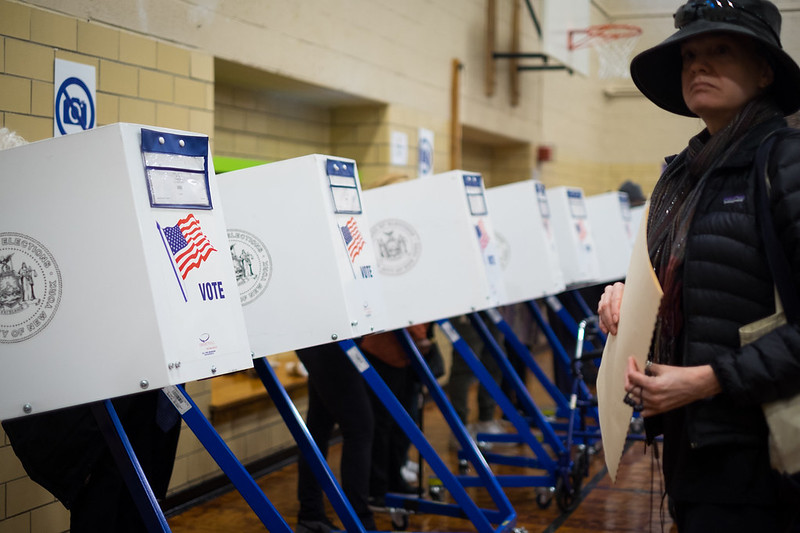 There’s one simple reason why New Yorkers should vote for the Libertarian ticket for President this year: it’s the most effective, real, and tangible way to support democracy.

Earlier this year, Governor Cuomo and the Legislature unfairly raised the barriers for third parties to appear on the ballot in New York State. Your vote for Dr. Jo Jorgensen, the Libertarian candidate for President, can help thwart Cuomo’s goal of depriving New Yorkers of any real choice beyond “the Democrat” and “the Republican.”

This is important. Here’s why.

First, we must recognize that New Yorkers’ presidential votes do not matter in 2020. This is not an insult. Joe Biden is favored to win the state 99 to 1 and the latest poll has Biden up 31 percent on President Trump. Under our electoral college system, New York’s 29 electoral votes will all go to Joe Biden. The ultimate number of individual votes Biden and Trump receive makes no practical difference.

Second, in April of this year, at the height of the COVID-19 pandemic, Cuomo inserted into the state budget a law to effectively kill third parties. The law increases the number of votes and signatures it takes to get onto the ballot and to stay on, securing a ballot line on which to nominate candidates. In New York, unlike in other states, a political party has only one route to get onto a state-wide ballot: it must gather enough valid voter signatures over six weeks to petition its candidate onto the ballot on its party line. Once on the ballot, if the party’s gubernatorial candidate garners enough votes, the party gets to avoid petitioning and operate as normal—so long as its gubernatorial candidates keep garnering enough votes every four years.

Until April, this meant 15,000 signatures and 50,000 votes for governor. The new law makes three changes that render this already difficult process much more onerous: First, it triples the number of signatures to 45,000. Second, it raises the number of votes to 2% of the total vote or 130,000, whichever is greater. (Recent presidential elections show that 2% is around 160,000.) Third, it applies these new thresholds every two years to presidential and gubernatorial elections, not just every four years to gubernatorial elections as in the past.

This new law is not fair. The commission that first conceived these changes in 2019 before its recommendations were struck down as unconstitutional claimed that the increase was to account for population growth since the 1930s, but that would result in only a 1.27% vote threshold or about 100,000 votes.

In reality, nothing explains the vote threshold the commission came up with, the tripling of signatures for petitioning without any extension of time for collection, or doubling the frequency for qualification—except as an attempt to save the Democratic and Republican Parties the inconvenience of having third parties in the general election. Third parties (except for the Conservative Party, which only cross-endorses certain Republicans) don’t generally meet this new threshold, and the new, nearly impossible petitioning threshold will keep them off the ballot or bury them in busywork to neuter their effectiveness.

No believer in democracy and voter choice should support this law. Most of the third parties in New York have sued to stop it, despite our limited resources, though it’s not looking good.

But you can save us! If you are willing to part with your symbolic vote for Biden or Trump and cast it instead for Dr. Jo Jorgensen, you can make a real difference and save ballot access for the country’s third-largest party, the Libertarian Party. Getting to 160,000 votes is not impossible, but it will require a lot of help from non-Libertarians who agree that the ballot should not be used as a cynical tool to eliminate inconvenience and who appreciate the democratic ideal that voters should have real, diverse choices available to them.

Unlike other third parties in New York who use the “fusion” system to primarily cross-endorse major party candidates, we in the Libertarian Party volunteer our time, energy, and funds as a public service to present our own unique candidates. After more than 40 years of trying to simply overcome the obstacles to the ballot, we finally attained automatic ballot access in 2018 with Larry Sharpe’s gubernatorial run, which also expanded the political discussion in important ways.

Since then, we’ve been able to gain momentum to elect Libertarians, including a district attorney in Broome County (Binghamton). Here in New York City, we are currently running five congressional candidates, including Michael Madrid’s spirited opposition to Rep. Jerry Nadler, and are gearing up for 2021. Our candidate for Public Advocate last year presented not only the sole minor party voice, but also one with vision and passion for local reform that transcended partisan ideology.

We Libertarians present a true independent perspective. We’re too “fiscally conservative” for the comfort of Democrats and we’re too “socially liberal” for the comfort of Republicans. What we really are is believers in individual freedom and skeptics of government—viewpoints that are sorely needed in New York politics.

I am not asking for your time, money, loyalty, or agreement. This is a simple plea that if you care about democracy and agree that voters deserve unique and diverse choices on the ballot, please consider voting Libertarian for President this one time. It won’t affect your favorite candidate’s chances and you don’t need to tell anyone. And your vote will matter.