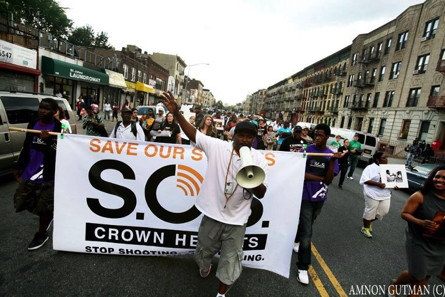 Photo courtesy Save Our Streets, used with permission.

NEW YORK — Amid debate over the New York Police Department's "stop-and-frisk" policy and following a rash of fatal shootings — including the recent death of a young child by a stray bullet — city lawmakers are giving money to programs that approach gun violence as a public health threat.

The City Council said yesterday it would fund programs in South Jamaica, the South Bronx and at Richmond University Medical Center that use the CeaseFire model that has been nationally recognized for reducing violence in Boston and in Chicago.

The city is already home to at least two programs modeled after CeaseFire — one in Crown Heights, Brooklyn, called Save Our Streets, and another, called SNUG, in Harlem and Brooklyn.

The new programs will be funded through the Council's anti-gun violence initiative, which received $4.8 million in June. Two additional CeaseFire programs in Harlem and East New York are expected to be funded by the city Department of Health.

The CeaseFire model approaches gun violence as a public health crisis, as epidemiologists might address obesity or any other disease.

The model calls for trained, street-smart individuals to intervene in group disputes to avoid violence. Outcomes are tracked extensively. The goal is to prevent violence.

Councilman Jumaane Williams, the co-chair of the anti-gun violence task force, says that a strategy of "focused deterrence" — getting police to target specific individuals or networks that have been determined to pose a threat — will help the initiative achieve that goal.

"It puts police resources into the members of the community who are known to have had run-ins with the law, instead of focusing on the entire community," Williams said.

Council Speaker Christine Quinn said in a statement yesterday that CeaseFire focuses "on both rapid response and early prevention."

"We believe this initiative will complement the work of the NYPD and help save lives," she said.

The city's most debated tool for combating gun violence — stop-and-frisk — has been criticized for a heavy reliance on scattershot policing and for affecting predominantly black and Latino youth. Mayor Michael Bloomberg and the NYPD have defended it.

The spike in shootings has complicated the narrative, throwing the stop-and-frisk debate into a new light, with some former critics announcing their newfound support for it.

"If the stop-and-frisk policy can make a difference, then we need to realize that it’s time to support stop-and-frisk," wrote Senator Ruben Diaz in a statement posted on his website on July 23rd, the day after 4-year-old Lloyd Morgan was killed in Morrisania. Bronx Assemblyman Eric Stevenson shared the sentiment. “There is a 4-year-old dead. Now we should really consider not stopping stop-and-frisk,” Stevenson told the New York Post.

In recent days, police reported that stop-and-frisk encounters had declined by 34 percent in the past three months, compared to the first three months of the year.

As part of the public health approach, the Council-funded initiatives will attempt to treat entire communities stricken by violence, with a sort of "holistic cure." That means offering training and job-placement services, therapy, and conflict mediation classes for public school students.

"The cause isn't one thing, so the answer isn't going to be just one thing," Williams said.

Robert Gangi of the Urban Justice Center, an outspoken critic of stop-and-frisk, is another advocate for focused deterrence.

"One of the factors that contributes to street crime is lack of services," Gangi said. "The failure of schools, the lack of jobs, those are the issues and the problems that should be directly addressed â€¦ Addressing those problems would be more effective in stopping crime than any policing activity."

"It's very easy to spend $5 million on a problem and not learn anything about it, to get inconclusive results," Dr. Rosenberg said. "If we don't evaluate, there's a risk we will implement policies based on bad data."

It is not yet clear whether the Council has or will set aside for evaluation a portion of the $4.8 million allocated to the anti-gun violence initiative.

The Model in Action

Save Our Streets, a Crown Heights community organization, is one New York City program that has already adopted the public health approach. It is a project of the Crown Heights Community Mediation Center and the Center for Court Innovation.

Founded in 2004 with a grant from the federal government to replicate the Chicago program, like that pioneering effort, S.O.S. organizes community responses each time a shooting takes place in the neighborhood, and employs "violence interrupters" who spend their overnight shifts trying to learn of conflicts early enough to prevent them from turning violent.

The organization also recruits local businesses and residents to join in the mission to "articulate that shooting is an unacceptable behavior," namely by posting the flyers — ubiquitous on Kingston and Brooklyn avenues — that keep track of how many days the neighborhood has gone without a shooting.

"Until this approach there was a feeling of hopelessness, there wasn't really a job for people to do," she said. "With this model, people can get involved."

That involvement took a creative turn this June, when the organization's youth component, known as Youth Organizing to Save Our Streets, pitched in to contribute to the S.O.S. "Week of Peace."

The youth organizers, a group of teenagers aged 13 to 17 who live in Crown Heights, were gathered at a neighborhood corner when two of them began to argue.

The conflict quickly escalated, and soon a shouting group of teenagers had gathered around the pair and seemed ready to join in as soon as the situation called for backup.

It was a familiar sight for most onlookers, but this conflict was different, because it was staged.

Just as violence seemed imminent, the "fight" morphed into a coordinated dance routine to "Waving Flag" by K'naan. It was a flash mob, meant to convey a very specific message to the teens' peers and community.

"They feel an urgent need to prove that when young people gather it is not always for malice," said Ruby-Beth Buitekant, a case manager for YO S.O.S. "They used a current trend and brought it to their neighborhood to say, 'enough is enough. We are sick of the guns.' "

"After we finished dancing everybody came [to] us, they took our pictures, and some of them was crying," said Reean Charles, a youth member of YO S.O.S. "They were shocked."

The S.O.S.'s sister organization in the South Bronx will receive $500,000 in Council funding to create a similar CeaseFire program, also run by the Center for Court Innovation.

The Council has also allocated $500,000 to the South Jamaica, Queens, program to be run by Life Camp, Inc.; and $100,000 for a hospital-based program out of Richmond University Medical Center.

Ellenbogen said she's been lucky to work with elected officials who have been open to the organization's non-traditional approach.

"Every time I've sat down with a politician and they've heard me explain the model, they've been very interested," she said. "People are desperate for innovative approaches, and this one not only sounds right to a lot of people, but there's a growing body of evidence that indicates it's effective."

That evidence has caught the attention of experts outside of the criminal justice field as well.

In April, the Institute of Medicine held a two-day workshop where professionals in the health field met to consider the merits of treating violence as a disease. And, in Philadelphia, a consortium of hospitals collaborate on the Healing Hurt People, a violence intervention program, which counsels shooting victims to try to prevent retaliation.

"The fact that this is a public health issue is definitely accepted within the task force, and is becoming accepted more widely," Councilman Williams said. After all, he added, "what we've been doing is not working."