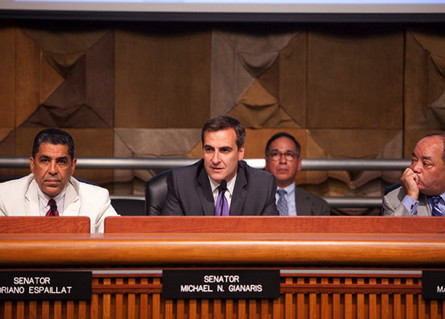 NEW YORK — The movie theater massacre by an assault rifle-toting suspect in Aurora, Colo. The slaughter of Sikhs at a temple in Milwaukee by a white supremacist with a handgun. An uptick in shootings in New York City, including the stray-bullet killing of a 4-year-old boy.

Elected officials have had plenty of reasons to tout the need for more gun control this summer. Political solutions, however, have been blocked.

Last week, Democratic state Sen. Mike Gianaris and a number of his fellow legislators introduced a package of 10 bills designed to combat gun violence. The centerpiece of that package would limit the purchase and sale of firearms to one individual to one per month. Another bill would institute a universal background check for gun sales — including private sales — along with a 10-day waiting period.

The bills would, Gianaris said, “set an example for the rest of the states in the country.” If passed, they would make New York number one in a list of states doing the most to prevent gun violence, according to The Brady Campaign, which supports the measures.

But Gianaris and his bills face a gigantic obstacle — the cold, hard cash of the influential gun lobby.

In recent years, groups like the National Rifle Association and the National Shooting Sports Foundation have been pouring tens of thousands into state Senate Republicans’ campaigns in an attempt to stem the rising push for legislation that would make it more difficult to own guns in the state.

Nowhere is this better exemplified than in the battle over microstamping.

A technology that labels each bullet fired with markings unique to the gun that fired it, microstamping has been derided by critics who say the technology is untested and expensive. But it enjoys support from major law enforcement groups that say the technology would make it easier to trace shooters and solve gun crimes.

Democratic Assemblywoman Michelle Schimmel has introduced a bill to enact microstamping each year since 2008. But the bill only came to a vote once — in 2010. Yet the measure failed in spite of backing from Mayor Michael Bloomberg and New York Police Department Commissioner Raymond Kelly. The two even met with the Senate Republican leadership and city-based senators to win over their support for the measure.

But, in the end, Democrats failed to muster the 32 votes they needed to pass the bill as three upstate Democrats voted against it.

Schimmel said the money pouring in from groups like the NRA has had an impact. “There’s been no significant gun laws enacted in over a decade in New York State,” she said.

Scott Rief, a spokesman for Senate Majority Leader Dean Skelos, declined to comment on the Democrats’ proposed legislation. He said that his conference was open to working on some sort of legislation.

“We agree with the governor that more can be done to combat criminals who use illegal guns,” he said.

Gov. Andrew Cuomo said earlier this summer that he is only prepared to back a winner when it comes to addressing gun violence.

“We’ll discuss all the legislative proposals and see if we can come up with a consensus package,” Cuomo said during an August 7 press conference.

Republican senators face a dilemma: While they do receive campaign cash from the NRA, they also enjoy even more generous financial support from Bloomberg, who founded the Mayors Against Illegal Guns coalition and generally supports gun crime prevention initiatives.

But Republicans are loathe to address the issue of gun violence in the same way Democrats are. Part of their tight-rope walk is making sure any legislation they propose is presented in a way that the NRA and other gun lobbyists can tolerate.

Sen. Martin Golden, who represents Brooklyn, is the only Senate Republican to put forward a bill in recent memory that would in some way regulate guns. His measure would increasing the penalty for criminals who use “community guns,” which are weapons stowed away for gang members to share. Bloomberg has announced his support for Golden’s measure.

"If Marty Golden were serious about gun control, he would have fought to pass several gun control bills over the past few years. Instead, he worked to turn his 2008 NRA rating of 'B' into an 'A' in 2010. Golden acted against the wishes of police unions everywhere when he walked out of the chamber during a microstamping bill in 2010,” Gounardes said in a statement.

Golden did not respond to a request for comment.

It is unclear how Golden’s bill will fare in comparison with measures backed by Democrats over the past few years.

“A small minority is spending too much money in political campaigns across the country preventing the political will from moving forward to doing the right thing,” she said.

Gianaris said he thinks there is no reason for Republicans or the gun lobby to oppose his bills.

“There is nothing in any of these bills that would hinder a sportsman, a hunter, a collector from doing what they want with firearms, this is targeting specifically to illegal gun sales, illegal gun purchases â€¦ and that’s why we’ve had so much support, even from gun owners,” Gianaris said.

Kamelia Kilawan contributed to this report.