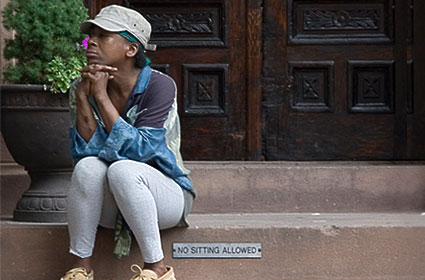 The New York Court of Appeals has ended years of litigation with its recent decision that the state's Safety Net Assistance program does not assure that shelter allowances it provides will be adequate to rent a home and that the allowances cannot be challenged by benefit recipients.

This ruling therefore makes a clear distinction between the Family Assistance program, which guarantees an "adequate" allowance for shelter and the Safety Net program, which does not.

A Struggle to Pay the Rent

The plaintiffs in the current lawsuit, Doris Brownley and Janee Nelson, both single mothers, commenced the lawsuit in 2002. They were acting on their own behalf and for all families with children who receive Safety Net Assistance benefits but who are faced with eviction from their homes because the New York City shelter allowance will not cover their rent. In addition, they do not qualify for a rent supplement under other programs or qualify for a supplement that still does not meet their needs. In other words, the rent contributions they receive from Safety Net are less than their rent, leaving them to face eviction and the risk that their children will be placed in foster care.

Doris Brownley and her young son lived in Brooklyn in a one-bedroom rent stabilized apartment. The rent was $879.75 per month when the current round of litigation began. She received public assistance until she found a job and also began attending college. However, after an accident and surgery she lost her job and reapplied for welfare. In the meantime, she fell behind in her rent, and the Safety Net program in which she was enrolled paid only partial rent to her landlord.

Her landlord initiated a non-payment proceeding against Brownley who was unable to pay the balance of $579.75 but once in Housing Court agreed, unrealistically, to pay a judgment of $5,050 for arrears within a month.

Janee Nelson lived in the Bronx with her then-four year old son, her stepfather and three young stepsisters in a three-bedroom rent stabilized apartment with a rent of $1,401. Nelson, too, had lost her job and was attending school. With various benefits to members of the household they still fell $401 short on their rent. In March 2004, a non-payment proceeding was brought in Housing Court where, to forestall eviction, like Brownley, she agreed to pay within a very short time $4,055, including arrears and fees, which she did not have and could not obtain.

Eligible individuals who receive public assistance for housing costs under the Family Assistance program are limited to the five-year period of "welfare" that a person may receive in her lifetime, regardless of need. This is a combined federal and state program that followed the enactment of the Clinton administration's Personal Responsibility and Work Reconciliation Act of 1996. In the wake of the federal mandate to "eliminate welfare as we know it," New York enacted the Family Assistance program for families with dependent minor children, replacing Aid to Families with Dependent Children. After the five years, eligible people may seek the protection of Safety Net, which provides shelter assistance.

Under the Family Assistance program and a case begun two decades ago in the late eighties, and well known as "Jiggetts," funding must be adequate to provide a family with a home. Jiggetts, which was also ultimately decided by the Court of Appeals, held that this state has a duty to establish shelter allowances for Family Assistance recipients that bear a reasonable relationship to the cost of housing in New York City. With that mandate, "allowances shall provide for the support, maintenance and needs of one or both parents if in need and in the home and for the support, maintenance and needs of the other relative if he or she is without sufficient means of support, provided such parent, parents and relatives are not receiving federal supplemental security income payments and/or additional state payments for which they are eligible." In Jiggetts, the courts found in 1988 that shelter allowances did not bear a reasonable relation to the cost of housing in New York City, and new shelter allowances were established.

The more recent court case sought to extend that reasoning to the Safety Net assistance. The court ruled, however, that while Safety Net may be available after the 60-month limit on Family Assistance runs out, it does not have the Jiggetts provision and does not have to be adequate to pay for a reasonable home. Plaintiffs had attempted to intervene in the Jiggetts lawsuit, but were directed to commence their own court action, which was dismissed by the Court of Appeals.

Judge Victoria Graffeo, writing for the entire court and upholding the lower courts, distinguished the two relevant programs. Family Assistance, she wrote, is for the explicit purpose of enabling a family to "raise a needy child properly, having regard for the physical, mental and moral well-being of such child," in light of New York's commitment to the protection of children and the maintenance of children in the home. Safety Net Assistance, however, she continued, "places no restriction on how long a person is eligible to receive ... benefits, applies more broadly and is not contingent upon the presence of children in the household."

Thus, the state's highest court concluded that the adequacy requirement does not apply outside Family Assistance and that that was the intent of the legislature. "It was," the opinion said, "the burden of the legislative and executive branches of government to weigh 'the intractable economic, social and even philosophical problems present by public welfare assistance programs.'"

The court dismissed the plaintiffs' arguments of unconstitutionality saying, "there is no right to a constitutionally prescribed minimum shelter allowance since it is the prerogative of the legislature to determine who is 'needy' and allocate the public dollar accordingly."

According to Scott Rosenberg of the Legal Aid Society, counsel for the plaintiffs, both Brownley and Nelson lost their apartments when they could not pay the rent. No other information was available about them or their families.

The State of New York was represented by Oren Zeve of the office of Attorney General Andrew Cuomo. A brief in support of the tenants was submitted by several public interests groups including Community Service Society of New York.