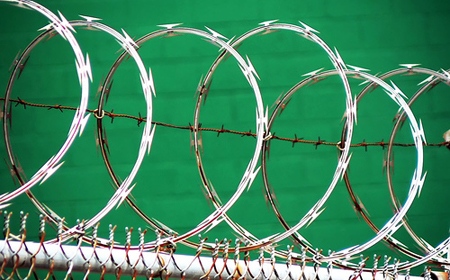 "This is the year to reform the Rockefeller drug laws," Gov. David Paterson has just finished saying Tuesday morning in Albany. He stands before a crowd of hundreds as a man with shaggy gray hair approaches him with a stack of signatures. Paterson shakes the man's hand and smiles. One by one advocates from across the state present the governor with piles of petitions and declare their support for the "full repeal of the Rockefeller Drug laws," New York's harsh rules on sentencing of drug offenders. Advocates are excited to have Paterson listening to them.

Assembly Speaker Sheldon Silver and Senate Majority Leader Malcolm Smith also have dropped by to support the cause. But the truth is, Paterson and these advocates are talking about two different things. The advocates, who carry a total of 30,000 signatures, are demanding full repeal of the Rockefeller drug laws, while Paterson is advocating changing the laws.

This Tuesday, hundreds of drug reform advocates descended on Albany, and, in sharp contrast from their chilly reception in years past, found the governor, Senate majority leader and Assembly Speaker all waiting to greet them and listen to their concerns.

The Assembly recently passed a Rockefeller drug law reform bill that emphasizes the importance of treatment over incarceration and restores a hefty amount of judicial discretion in the sentencing of drug cases. It is what New York State drug reform advocates have always wanted -- sort of.

What the Assembly Bill Does Not Do

Advocates of major changes to New York's drug laws are walking a thin line between jubilation and disappointment these days. The Assembly's legislation would make about 50 percent to 60 percent of currently incarcerated offenders eligible for treatment instead of incarceration. It would increase funding for drug rehabilitation programs and community-based alternatives to prison. But it does not restore judges' discretion in a number of cases.

Offenders subject to mandatory prison sentences would include people who sell more than a half ounce or possess more than four ounces of a hard drug; people who have a violent felony conviction in the last 10 years; and adults who sell drugs to minors.

Advocates stress that they object not to such limits but to the fact that the Assembly bill leaves mandatory sentences intact and still judges offenders by the amount of narcotics in their possession at the time of their arrest. Reform proponents want to see offenders judged on the individual's prior record and what his or her role in the transaction was. They say it is important to differentiate between an addict selling drugs to maintain a habit and a higher-level drug dealer.

Politicians, though, find it difficult to do away with mandatory minimum sentences on offenders whose crimes seem serious because politicians don't want to be seen as soft on criminals.

In other words, the Assembly bill is not full repeal. "The public needs to know that this is not what we have been fighting for," said Caitlin Dunklee of the Drop the Rock Campaign. She estimated the Assembly legislation would leave 50 percent of future drug cases subject to the constraints of mandatory sentencing.

In this, there is a sense of deja vu. Dunklee said that in 2004 and 2005, when the legislature made some reforms to the drug laws, "it was painted as full repeal. People stopped caring and we continued to have these harsh laws on the book."

Whatever its shortcomings, though, the Assembly bill might not become law even though Democrats control both houses of the legislature and the governor's mansion. This presents a bit of a quandary for those advocating repeal. They have to push the Senate to act on a bill similar to the Assembly's and at the same time remind legislators that this is not the end in the fight to repeal the Rockefeller drug laws.

"The stars are the most favorably aligned they ever have been, "said Robert Gangi, executive director of the Correctional Association of New York. "We have a Democratic governor, the Democrats control the Senate, and we have the fiscal crisis. Because in the end this is an issue of money."

Insiders say Silver has rushed forward on progressive bills such as drug reform to earn himself political capital and reaffirm his base after facing two primary challengers last year, all the while knowing that Smith would not have the support to pass them in the Senate.

Gangi admitted that there is a lot of opposition to the Assembly reform bill in the Senate. "We hear it is not just Republicans but blue dog Democrats," he explained.

Democratic Sen. Craig Johnson of Port Washington, for one, has made it clear that he has "significant reservations" about the Assembly's reform bill, although Johnson's spokesperson, Rich Azzopardi, said that Johnson "is not prepared to negotiate those reservations in the media."

Rather than try to hash out the differences between his conference members on an individual reform bill, Smith has decided to make Rockefeller reforms part of the Senate budget package. Smith told the gathered advocates on Tuesday, "I want to assure you all that what we are going to do, in this year, in this budget, is reform the Rockefeller Drug Laws."

Azzopardi said Smith's decision to move the drug reform legislation into the budget process makes "a certain amount of sense, as both sides of the debate have economic implications."

Republican opponents of Rockefeller reform do not find Smith's decision as appealing. Republican Sen. Frank Padavan of Queens told the Post, "I think we ought to be very careful when we start talking about putting 2,000 drug pushers on the street. That's outrageous to put in the budget. It's the worst form of political chicanery."

Uncertainty in the Senate is not the only obstacle standing in the way of the Assembly's bill becoming law; advocates are growing ever more concerned that the man who started the discussion of drug law reform this year, mentioning it in his State of the State address, might be wavering in his support. They say that Paterson's representatives at the negotiating table want to scale back parts of the Assembly's bill. One of the sticking points apparently is restoring a judge's discretion in drug cases where the offender has committed a second felony.

Advocates say that Paterson or his staff are posturing in preparation for the 2010 gubernatorial campaign.

Paterson's position has indeed changed since he was Senate minority leader in 2004. Back then, Paterson proposed drug law reform that would have included restoring judicial discretion for all second-felony drug offenders convicted of B-E level felonies (felonies are graded from A to E by their level of seriousness) as long as they did not have a violent offense in their history.

A spokesperson for Paterson said, "On the biggest issue the governor agrees on the fact that judges should be able to exercise discretion on non-violent felonies. The governor has put together a working draft bill to discuss with the Assembly and Senate, and they are working on their differences." The spokesperson said that disagreements exist over mandatory minimum sentences and to what extent any changes should be retroactive.

Paterson’s office reportedly is concernedthat making the law retroactive would be prohibitively expensive because of the number of resentencing petitions that would be filed.

In the end, if Smith's gambit pays off and the Senate moves on reforms, advocates say they will celebrate but at the same time know that there is more to do. They say they have known they were in a battle for "incremental change" from the start. In their opinion there are a lot of good aspects to the Assembly bill. They just worry that another time where the political stars align may not come along soon.

Albany County District Attorney David Soares, who has been a staunch critic of the Rockefeller drug laws, said there is one gigantic benefit of the Assembly bill if it should pass: funding for alternative treatments. "The criminal justice system is open 24 hours a day," said Soares. "It's a shame people have to come here to get the help they need. But because of this reform less people will have to go through the criminal justice system to get that help."