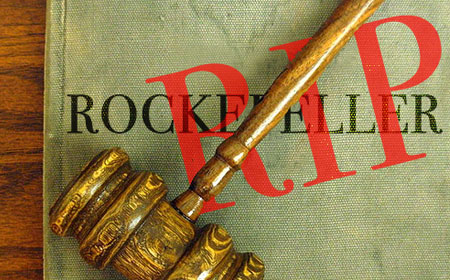 Thirty-five years after New York's criminal justice system was invaded by a misguided and counterproductive legislative scheme to fight the "war on drugs," there is finally some relief. The statutes known as the "Rockefeller Drug Laws," enacted in 1973 when Nelson A. Rockefeller was governor, have long been called draconian, the harshest in the nation and the end of judicial independence. They were based on long mandatory prison terms even in nonviolent cases involving small amounts of drugs, and judges were not permitted to impose sentences they believed better fit the crime and the accused. [For Emily Jane Goodman's essay on the Rockefeller drug laws, see Huffington Post.]

Now, after long and unprecedented organizing by community groups and criminal justice advocates, along with an aggressive push by elected officials and judges, some of the most onerous and destructive provisions have been removed or amended.

The Rockefeller Drug Law amendments, which were signed into law by Gov. David Paterson earlier this month, reflect a changing philosophy and approach to prosecuting nonviolent drug offenses in this state, especially first offenses, and even incorporate the view that drug addiction is a health issue as well as a legal problem.

Sen. Eric Schneiderman, who introduced the reform bill in the State Senate said, "New Yorkers have been clamoring for changes to these laws for decades and after careful deliberation, we finally achieved significant reform. By expanding the ability of judges to sentence drug-addicted individuals convicted of non-violent drug crimes to treatment, New York State is sending a message that there is a better way than our society's pattern of under-treating and over-incarcerating."

The goal of reform has always been the elimination of mandatory sentences, which forced judges to impose prison terms that ruined more lives than they saved, occasionally breaking the judge's heart at the same time. Some Supreme Court judges have cried as they were required to sentence a mother -- let's say, a first time offender -- to three years to life for carrying a package for someone else who may have misled her as to the contents. Any judicial departures from the mandatory minimums were swiftly reversed by appellate courts.

Now, judges can have that discretion.

Under the revisions, a typical first offense possession case can result in a sentence of between one and two and a half years or an alternative sentence focused on drug treatment. If the accused has a prior record for a non-violent offense, the maximum becomes four years with treatment alternatives still possible depending on the details of the record. For defendants who previously committed violent crimes, the sentences increase and alternatives are eliminated. All of these sentences require intensive supervision for long periods of time.

The revisions represent significant changes to the sentencing scheme, in the approach to alternatives to incarceration, treatment and supervision. Now judges have the discretion to impose appropriate sentences, including drug treatment programs, without first obtaining the permission of district attorneys. Previously, district attorneys insisted on long periods of incarceration even when a defendant has an opportunity to be rescued from a life of crime by going to treatment instead of a cell.

The amended law provides a mechanism to divert certain eligible defendants into drug treatment. To be eligible, defendants must be non-violent, first offenders (sometimes second), who are not accused of the most serious drug felonies. The court may require the defendant to plead guilty prior to being referred to a community-based treatment program. An individual who fails to complete the program and abide by other conditions will then have to face the consequences of the guilty plea. A defendant who meets all the requirements may then be able to withdraw the guilty plea.

Judge Laura Safer-Espinoza, who presides in Bronx Treatment Court, which has functioned with the district attorney's approval, said such an approach has proved effective. "Over the last 10 years," she said, "I have seen over a thousand clients 'graduate' from our program. They have been drug free, compliant with treatment and working full time, enrolled in job training or back in school. Extending the treatment option to break the terrible cycle of drug abuse and crime is not 'soft on crime policy.' Defendants must plead guilty, undergo continuous monitoring by the court, and face serious penalties and higher sentences for non-compliance."

While the Rockefeller laws may have been directed at "drug kingpins," small time users -- most of whom are poor, and black or Hispanic -- felt the brunt of their effect. The reforms do not protect the big-time dealers or major traffickers, who can still be sentenced to 25 years to life. Cases involving violence, or defendants with records, violent or not, can still face heavy sentences.

Not the End of Rockefeller

For the last three and a half decades, when it came to drug offenses, the scales of justice have not represented our adversary system, with a prosecutor on one side, defense on the other and a judge in the middle. The shift, according to Gabriel Sayegh of the Drug Policy Alliance Network, came as prosecutors convinced the state's leaders "that judges are entirely incapable or incompetent to fashion appropriate sentences or actually do what their titles imply they should do - judge."

Even with the reforms signed, some still hold to that philosophy.

Councilmember Peter Vallone, Jr., a former assistant district attorney in Manhattan, wrote in the New York Post that the reform would turn New York into a "violent drug bazaar."

Daniel M. Donovan, the district attorney of Staten Island and the president of the state District Attorneys Association, told the New York Law Journal: "What you are doing is you're cutting out an essential part of the process, the district attorneys. And we are the ones that are elected to protect the public safety. And now we have been cut out of the process that helps insure that public safety."

Similarly, some prosecutors and legislators who oppose judicial discretion argue that New York City judges are not tough enough in sentencing drug users.

Beyond the criticism, some officials are still trying to work out how these reforms will affect the state's current prison population.

Elsewhere, even those who applaud the legislators and Paterson argue many addicts still will not qualify for treatment and rehabilitation. According to Donna Lieberman of the New York Civil Liberties Union, the changes "restore an important measure of common sense and rationality to our drug laws. But there is more work to be done in the future to restore fundamental justice and fairness to our criminal justice system."

It is too soon to know exactly how the details will work in drug treatment courts and state Supreme Court, but it is clear that we can say goodbye to some of the most egregious inequities of the old law.