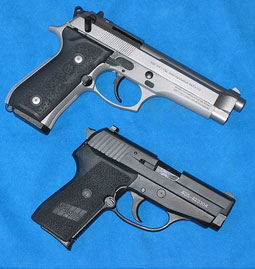 The United States Court of Appeals in New York has upheld the sentence imposed by a federal judge although it was stiffer than the guidelines recommended for the weapons conviction. The judge said the punishment was warranted as an enhanced deterrent to illegal weapons in urban areas. While federal judges are no longer bound by mandatory sentencing guidelines and have some discretion in sentencing, in United States v Cavera (in pdf), the court imposed a harsher sentence, focusing on where the crime took place and where the fruits of the crime were going.

The case involved trafficking in weapons in order to bring guns into New York City. When the defendant, Gerard Cavera, pled guilty in the U.S. District Court in Brooklyn in 2005 to conspiracy to deal in and transport firearms, he could have been sentenced to 12 to 18 months in prison and a fine of between $3,000 and $5,000. However, in a detailed decision, the sentencing judge, Charles Sifton, increased the sentence to two years in prison and a $60,000 fine. (If Cavera had faced similar New York State charges, he would have faced a far more severe punishment -- 15 years in prison.)

Federal guidelines are advisory and are meant to create some uniformity in all federal districts around the country. Sifton determined that exceeding the recommended sentence was appropriate in this case because of the damage inflicted by guns in urban areas, such as New York. A stiffer sentence, he said, was intended to "deter gun trafficking into the large metropolitan areas of this country" where homicide rates are greater and the sale of illegal weapons more profitable than in the nation as a whole.

In an unusual procedure, the entire Court of Appeals heard arguments. The judges upheld Sifton's rationale that, since deterrence was the goal, he could consider deterrence in a particular location. For a judge to do this, he or she must address the nature of the offense and the history of the defendant; the need for the sentence to reflect the seriousness of the crime, provide punishment and afford adequate deterrence; and the necessity to protect the public.

Crime in a Crowded Place

Cavera and others had worked with a person who they did not realize was an informant to sell and transport guns to New York from Florida in 2003. There were approximately two dozen handguns at a price of $16,600, all expected to be sold by other individuals on the streets of New York.

"Firearms," Sifton noted, "smuggled into New York City commonly end up in the hands of those who could not otherwise legally acquire them, are frequently used for illegitimate purposes, and have the potential to create a substantially greater degree of harm when in an urban environment such as New York City than in the United States generally." He observed that the population density of Brooklyn, the area covered by the court, exceeds 35,000 per square mile, compared with 78 for the rest of the country. "New York City is the most densely populated urban area of the country," the judge said, and so at greater risk of harm due to the presence of illegal guns.

It followed, then, that "stiffer sentences for gun traffickers who move their wares into large metropolitan areas are also supported by the purpose of gun trafficking laws, which is to prevent lax firearm laws in one state for undermining the more restrictive laws of other states," Sifton said. Despite that, the judge noted, "In states with strict gun control laws, such as New York, a higher percentage of guns used in crimes arrived from out of state."

The federal sentencing guidelines, in Sifton's view, do "not reflect objective variations in the increased risk of death or injury that the offense creates in different parts of the country." Instead, he said, the federal firearm laws is geared to more rural parts of the country where guns are commonly used for recreation and are less likely to kill or injure people than they are in this city. With that in mind, Sifton said, this case called for a tougher sentence.