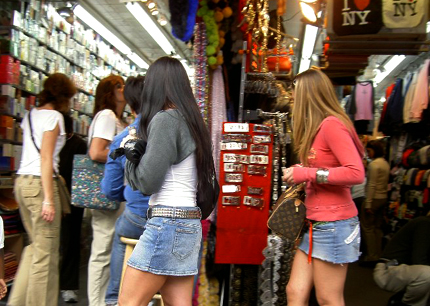 The results of last month's Chinatown raid were dramatic: over $1 million in seized counterfeit goods, 32 illegal vendors closed down and an entire block emblazoned with orange "closed by court order" stickers.

Yet only a few days later a visitor to Canal Street could easily purchase fake Gucci bags and other brand-name products, a testament to the deeply rooted nature of the counterfeit trade. A Daily News headline said it all: "Chinatown block shuttered in huge raid, but brassy bootleggers still hawk fakes."

Welcome to the wild world of counterfeiting, which nets $23 billion in New York City annually and enriches a shadowy international underworld of smugglers and criminals - all supported by shoppers looking to save a buck.

New York City is one of the world's chief counterfeit hubs. In addition to being a major tourist and retail destination, the city's ports handle 13.4 percent of U.S. container traffic, providing ample opportunities for illegal shipping. For example, last December, the New York Times reported that federal officials seized over $200 million in smuggled goods at the Port Newark-Elizabeth Marine Terminal in New Jersey, including counterfeit Nike Air Jordan sneakers listed as "refrigerated noodles" on the ship's manifests.

Most counterfeits come from China, where experts believe that anywhere between two-thirds and 85 percent of all fake goods are manufactured. According to Caroline Joiner, executive director of the Global Intellectual Property Center at the U.S. Chamber of Commerce, a quarter of China's non-farm workforce, or 35 million people, are engaged in the production of counterfeits. Many work the so-called "ghost," or third shift, in which factories produce two shifts of legitimate items but stay open overnight to produce counterfeit goods.

These goods are typically shipped to wholesale vendors in the United States and other Western countries, and then distributed to smaller-scale street vendors like those in Chinatown. Sales of other goods like knock-off drugs and auto parts may bypass the street-level vendor and go directly to the consumer, who often does not know they are buying a fake.

"There are very powerful market forces at work here" said Moises Naim, the editor of Foreign Policy Magazine and the author of Illicit: How Smuggler, Traffickers and Copycats are Hijacking the Global Economy. "There are hundreds of millions of hungry customers and hundreds of thousands of very sophisticated entrepreneurs."

Bloomberg has won high praise from experts for his aggressive anti-counterfeiting enforcement efforts. Since 2003, the city has seized $60 million in knock off goods and collected $1.5 million in fines. A number of observers also credit the city with shutting down bootleg CD and DVD manufacturers in Manhattan's Garment District.

"People tend to sense what's OK by what is allowed to go on openly in public," said Brad Buckles, executive vice president of anti-piracy for the Recording Industry Association of America, which has led an effort to reduce music piracy. "Actions like Mayor Bloomberg took on Canal Street help make people realize that this is sleazy behavior and not legal."

Many observers believe that, aside from New York City, government agencies do not take the problem of counterfeiting seriously enough. Distracted by terrorism and other more traditional crime, law enforcement has little time or energy left to address this issue. "One intellectual property lawyer told me that he was told by law enforcement that unless there was a dead body involved, 'don't even pick up the phone'" writes Phillips.

In its Canal Street raid, the Office of Special Enforcement followed an innovative "landlord-based" approach that targeted the estate of Vincent Terranova, the owner of three buildings that housed the illegal vendors. The estate had been named in an earlier lawsuit filed in the Federal District Court in Manhattan by luxury good brands such as Burberry and Marc Jacobs, according to the New York Times. Before the raid, undercover police officers and city agents made over 40 purchases of counterfeit goods. The city obtained a temporary restraining order against Terranova Properties which keeps the building closed until proof is provided that there is no more illegal activity.

However, most experts agree that ending, or at least limiting, the sale of counterfeit goods requires more than a law enforcement approach. The key is to challenge the widely held notion among consumers that buying counterfeit goods is a victimless crime and a harmless exercise in bargain hunting. "Until we deal with the demand side of the equation, it's a lost cause" said Joiner.

"We need consumers to help us instead of burying their heads in the sand," said Commissioner Ray Kelly in a press release. "No matter how 'victimless' a crime may appear, when you scratch the surface you are bound to find some unpleasant realities. That's true in the knock-off trade."

Arguments about lost tax revenues and jobs might not dissuade most individuals from buying a knockoff Gucci bag for $40 when the real thing can go for close to $2,000.

That's why advocates are trying to enlarge the discussion to a broader set of public health and safety issues. The goal is to "make the problem more real to consumers," said Joiner.

For example, according to the Office of Special Enforcement, the buildings housing the wholesale vendors often lack basic fire safety protections such as sprinkler systems. "These buildings violate every code in the book," John Feinblatt, the city's criminal justice coordinator, told the New York Times. "The exit signs are obliterated, or the fire exits are locked or blocked by boxes of merchandise. They're fire traps." In addition, for security reasons, customers are often carefully escorted in and out of buildings and locked into rooms while they search for items, making it a "frightening experience" according to Hyman.

Advocates also argue that knock-off goods, which are impossible to regulate, are also potentially life-threatening. Author Phillips called these "counterfeit killers," citing such examples as fake insulin used by diabetics and fake Lipitor, used by patients with high cholesterol levels. "Talking about medicine that can kill is a very different conversation than talking about the latest Britney Spears album," said Naim.

More broadly, advocates make a moral argument about counterfeiting, contending that what lies behind a seemingly innocent transaction with a street vendor could be a vast criminal enterprise. "The same groups which smuggle goods are also involved in prostitution, drug dealing and money laundering," Marc Ramondi, spokesman for the U.S. Immigration and Customs Enforcement Agency, told ABC News.

Still, it's unclear how widespread the counterfeit-criminal link is: The evidence presented tends to be anecdotal, perhaps a reflection of the shadowy nature of the business itself. The presence of the so-called "ghost" shift in many Chinese factories also points to an increasingly blurry line between knock off and "legal" manufacturing. Many of the social harms attributed to counterfeit production are also present when the rules are being followed, as evidenced by such high-profile cases as tainted pet food and reports of child labor in factories making Nike shoes.

Nonetheless, the Chamber of Commerce is actively wading into the public relations battle. They helped underwrite a documentary version of Naim's book Illicit, which will premier on public television on April 16. Naim hopes that the documentary will help spark a broader dialogue about the negative impacts of counterfeiting and illicit trade. "We need to change the conversation at dinner tables in America," he said. He sees the debate on global warming as analogous to what he wants to accomplish. "Five years ago, people talking about climate change were often laughed out of the room. Now it's skeptics who are getting the same treatment."

At the same time, business groups have responded by pursuing a number of new anti-counterfeiting strategies.

One approach involves technology. Kodak, for example, markets a "traceless" system that embeds invisible markers into labels that can only be detected by specialized readers. The technology is already being used by drug companies and high-end wineries to reduce fraud. "In fighting counterfeiting, it's better to call your scientists and engineers than your lawyers and lobbyists," Naim said.

The recording industry provides an interesting example of an attempt to target counterfeit consumers directly, though their experience defies any simplistic analysis. Industry groups have pursued an aggressive enforcement strategy, sending out thousands of so-called "pre-litigation" letters to college students illegally downloading music. The letters are first forwarded to universities, which are asked to pass along the information to students. The main impact of these letters has been the wave of publicity they have generated, particularly in campus newspapers. According to industry documents, the strategy has had an effect: The number of young people downloading music without paying has declined from 53 percent in 2004 to 30 percent in 2007, while the percentage of young people who say that downloading music for free is illegal has increased from 37 percent to 73 percent. According to surveys, fear of lawsuits is the reason most often cited by young people as the main reason they no longer download music or videos illegally - even though the likelihood of any individual being sued is very low.

It is still, though, relatively easy to download free music from the Internet illegally. Though the music industry succeeded in shutting down Napster, the most popular early distributor of pirated music, hundreds of smaller and harder to detect sites have grown up in its wake.

Fighting counterfeiting is an uphill battle, particularly when its victims lack the deep pockets of such groups as the recording industry. "The numbers are moving in the wrong direction," said Joiner. Ultimately, convincing bargain-loving New Yorkers that counterfeiting poses hidden costs may be a tough sell.