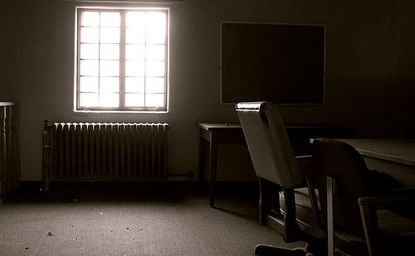 When Jimmy Byrd went on trial for nearly murdering the woman he lived with -- the mother of their young daughter -- the victim did not appear in court and Byrd's lawyer never cross-examined her. Byrd was convicted anyway. This, he said, violated his constitutional right to confront witnesses. The trial judge disagreed and now, so has the Supreme Court Appellate Division in Manhattan.

Byrd had abused Jill J, as the victim is identified in court papers, physically and mentally for many years. On July 26, 2002, he became enraged when she poured water into a glass in which there was a residue of juice, an action that, in Byrd's view, demonstrated her incompetence. The evidence established that he slammed her head on the tile floor, repeatedly stomped on her abdomen, breaking her ribs and causing her pancreas to split in half. He then refused to take her to the hospital. The police were not called, and it was only when Byrd left the house six days later that Jill J managed to get herself to the emergency room, nearly dead. Surgery saved her life.

After Jill J gave her testimony to a grand jury by videotape while in the hospital, Byrd, who had already been arrested, was indicted, charged with attempted murder and assault, and held at Riker's Island. But as frequently happens in domestic violence cases, Jill J refused to cooperate any further with the prosecution, deciding that she loved Jimmy Byrd and that perhaps he needed help, but not punishment.

The question to be decided by Justice James Yates was whether her refusal to testify was a decision Jill J made of her own free will or under duress from Byrd. Criminal defendants do have an almost absolute right under the Sixth Amendment to hear and see their accuser's testimony and to have that witness cross-examined by the defense. There is, however, an exception. If the accused himself is responsible for the witness's refusal to come forward, he cannot then use that to his own advantage. He cannot both cause the witness to recant or retreat and then say that, without her testimony, his conviction is unconstitutional.

In this case, People v Byrd, Jill J testified at a pre-trial hearing that she wanted to forgive Byrd and did not want him to go to prison. However, she also admitted, after first saying he had only called her a couple of times, that he had been calling her regularly from jail, sometimes as often as 10 times a day, asking her to send him money and proclaiming his love for her, telling her how wonderful life would be when he got out. All of this violated an order of protection, which prohibited Byrd from contacting Jill J.

The court allowed an expert to testify in front of the trial jury that these were typical interactions in cases of domestic violence and battered woman syndrome. (The appellate court, perhaps for reasons of political correctness and notions of gender neutrality, refers to the battered person syndrome, but the literature on the subject does not, since the victim is almost always the woman.) Jill J fit the profile of a battered woman. She is isolated, fearful and emotionally dependent and vulnerable to her tormentor's protestations of love and remorse, which, she believes, will end the cycle of violence. She is therefore willing to believe that it is better not to testify against this man and have him taken from her. If only he can come home, she believes, there will be peace and harmony and a happy family life, though that has never existed before. In fact, although not part of the appellate opinion, court records show that Byrd had a history of violence with other women.

Dr. Ann Burgess, a recognized authority on violence and victim counseling who testified for the prosecution, told the jury that the victim's poor self esteem, frequently a result of her batterer's treatment of her as well as her fear of him, often makes the battered woman believe that it is better not to continue the prosecution. While there was no evidence that Byrd actually told Jill J not to testify against him, Jill J had received more than 400 calls from Byrd while he was held at Riker's Island, and so, according to Burgess, was under his "coercive control."

Burgess described the three stages of domestic violence: the tension building phase, the violence phase and the honeymoon phase. It is during the honeymoon phase, Burgess said, that the victim is "seduced into believing that the abuse will cease and that the family will remain intact. This cycle repeats itself over many years."

Justice Yates found that Jill J's unavailability to testify was a direct result of the defendant's misconduct and allowed the videotape of her grand jury testimony to be shown to the trial jury. Byrd, who did not present any witnesses or evidence, was convicted of first and second degree assault.

An opinion by Justice Karla Moskowitz, newly appointed to the appellate bench, affirmed that decision. According to the opinion, the defendant procured the witness's refusal to testify "through violence, threats or chicanery," and it was established that Byrd's actions following his arrest showed a pattern meant to, at least in part, silence the witness. The court concluded that Byrd had therefore forfeited the constitutional right to confront his accuser and to raise certain other legal objections.