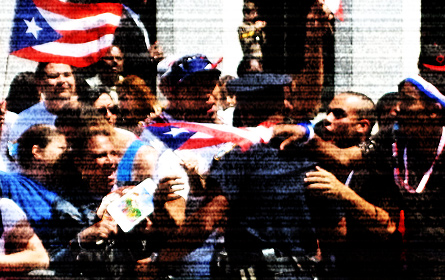 In the city of parades, the chain of events sparked by the parade that was like no other may finally be ending -- nine years later. The U.S. Court of Appeals in Manhattan has issued an opinion ending the litigation with a denial of a habeas corpus petition by Abel Ortiz.

As the Puerto Rican Day parade was winding down in the late afternoon of June 11, 2000, at the Central Park South entrance to Central Park, approximately 40 men began attacking women -- tourists, rollerbladers and parade-goers. Videos tapes and the testimony of eye witnesses, portrayed the men taunting their victims, ripping their clothing and manhandling them, punching, kicking and dragging them, and touching their breasts and vaginas.

Arrests were eventually made, although according to victims and witnesses, police officers initially failed to respond to pleas for help. Ortiz was one of the men arrested. Following a jury trial at which numerous complainants and witnesses testified, he was convicted of rioting and assault, but not sexual abuse. Acting Justice Bernard J. Fried sentenced him to five years in prison.

Ortiz has appealed at three levels, representing himself at the first two. His theory was that his conviction should be reversed on a novel and technical basis. He argued, as his trial counsel had, that he could not be guilty of riot in the first degree. Ortiz maintained that he had left the scene and so should not be responsible for the acts of others once he was gone. He claimed the state's law was unconstitutional, a denial of due process, because “it fails to provide a person of ordinary intelligence fair notice of what is prohibited.”

Videotapes showed Ortiz in the crowd, laughing, smiling, clapping and grabbing a woman and eventually saying, "Hey everybody be quiet, the bitch is over there down the road by the pole."

Based on interviews with Anne Peyton Bryant, the first of the assaulted women to reach a couple of police officers and beg for help, and probably the woman the statement referred to (Bryant later sued the police department for failure to respond and protect, and settled with the city), it is likely that the last word was not "pole," but "police." Either way the statement was not accepted as an effort to stop the rioting, assaults and sexual abuse that were taking place.

In his decision, Fried rejected the defendant’s challenge to the riot statute and conviction. He ruled that "once one joins a riot that person remains criminally liable for the conduct set in motion until he withdraws."

The jury was instructed that “the law punishes joint behavior . . . and one who joins a riot takes it as one finds it . . . Merely leaving the riot scene would not end one's criminal responsibility for someone’s actions. . . . A participant is responsible for the consequences of the group’s joint action or the conduct set in motion by the riot regardless of whether that person was actually there or present at the precise moment of the conduct. "

Moreover, "once one joins a riot that person remains criminally liable for the conduct . . . until he makes substantial effort to end the conduct.” In other words, without proof of substantial efforts to end the riot, Ortiz “was criminally liable for acts" after he left the scene. The statement made by Ortiz to the other men was not considered a serious effort to stop the rioting.

Going as far as it could in the New York State courts as People v. Ortiz, the case of Ortiz v. N.Y.C. Parole in Bronx, reached the federal appeals court. That court appointed a lawyer for Ortiz.

Upholding three lower courts, the three-judge bench of the Court of Appeals for the 2nd Circuit did not find the original New York interpretation unreasonable and did not find that any constitutional/due process rights were violated, even though it was the first time the issue had come up in the New York State courts. They concluded that Ortiz was not deprived of fair warning that his conduct was prohibited, and they rejected his contention that the law was not clear that his conduct was criminal.

They also agreed that the language of the law did not deprive Ortiz of "fair warning that his conduct was prohibited.” Once a law is enacted, people are bound by it even though they may not actually be familiar with it. Thus, the often-heard words, "Ignorance of the law is no excuse."

The Due Process Clause, the judges just below the Supreme Court of the United States held, "requires only that the law give sufficient warning that men may conduct themselves so as to avoid that which is forbidden, and thus not lull the potential defendant into a false sense of security, giving him no reason to suspect that his conduct might be within its scope."

Still, even while rejecting Ortiz’s claim that the state court misinterpreted the statute's plain meaning, the Circuit Court opinion may be seem as equivocal, since it quotes from an old U.S. Supreme Court case, that the riot law “ could have been drafted with greater precision. Many statutes will have some inherent vagueness, for in most English words and phrases there lurk uncertainties."

While the judges found that the state’s interpretation did not violate petitioner’s due process expectations, and his "fair notice claim lacks merit," it may have opened the door for an appeal to the U.S. Supreme Court. Other jurisdictions have reached the opposite result on similar statutes.

The Supreme Court of the U.S. accepts very few cases, and it is unlikely that this would be one of them. However, according to the New York Law Journal, Ortiz and his court-appointed attorney have not ruled out taking one final step.