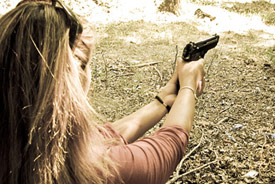 After Rashawn Handsome of Brooklyn was arrested for keeping three handguns in a sneaker box in his apartment -- without any license for them -- his Legal Aid attorney argued that Handsome had a right to bear arms under the Second Amendment of the Constitution. As we reported last year, a Criminal Court judge emphatically disagreed. The guarantee of the right to bear arms, Judge Michael Gerstein said, referred to state militias. No one, the judge reasoned, intended for every individual to "own firearms for their private, civilian use."

But now the Supreme Court has spoken on this issue -- in a case involving the District of Columbia's restrictions on guns. Could Handsome and his Legal Aid Society attorney have been right?

Exactly what the Second Amendment means has been debated for years -- centuries, actually. This summer the Supreme Court of the United States, in the case of District of Columbia v Heller, addressed the question for the first time. According to five of the nine justices, the words, "A well regulated Militia, being necessary to the security of a free State, the right of the people to keep and bear Arms, shall not be infringed," means that individuals have a right to possess weapons. The amendment, the court held, is not limited to states providing weapons to militias or, in modern times, the National Guard.

In light of that opinion, New York City cases that were held in abeyance must now be decided.

The Washington, D.C. and the New York state and city laws are quite different. Washington's laws, considered the strictest in the country, totally banned handgun possession and did not allow for the lawful registration of weapons. New York, on the other hand, permits gun ownership provided the individual wanting a gun obtains a license first.

New York's current requirements for a license are "good moral character" and that there be "no good cause" for denial. For the even more elusive right to obtain a "carry permit," which enables the owner to have the gun outside the home or business, "proper cause" must be established.

Defense lawyers have already challenged these restrictions in criminal cases where their clients have been arrested for possession of guns. These criminal defense lawyers argue that the New York laws are unconstitutional and therefore the charges must be dismissed. While lower criminal courts will continue to uphold city and state restrictions, those decisions will be appealed. It is considered unlikely that the appellate courts will find the licensing requirements unreasonable or unconstitutional.

The Supreme Court clearly said that the Second Amendment is not an unlimited right, and that conditions and qualifications, including a licensing law, could be imposed if they were not enforced "arbitrarily and capriciously." In other words, the justices expressly upheld both the ability of individuals to possess guns and licensing.

Richard M. Aborn, president of the Citizens Crime Commission of New York City and a gun control advocate, calls the decision, "a victory." It "validates that the Second Amendment is not a barrier to laws we need, such as licensing, registration, safety training," Aborn, a former prosecutor and candidate for Manhattan district attorney, said. "The issue is about keeping guns out of the hands of bad guys."

The court, however, clearly determined that an outright ban "amounts to a prohibition of an entire class of 'arms' that is overwhelmingly chosen by American society for that lawful purpose." Writing for the majority, Justice Antonin Scalia said, "Handguns are the most popular weapons chosen by Americans for self-defense in the home, and a complete prohibition of their use is invalid."

"We are aware of the problem of handgun violence in this country," the justices said, "but when it comes to an absolute prohibition of handguns kept and used for self defense in the home ... [such] policy choices [are] off the table."

This concerns some gun control advocates. The Brady Campaign to Prevent Gun Violence issued a statement saying, "After the Heller ruling as before, approximately 80 Americans will continue to die from guns every day. Our weak or nonexistent gun laws contribute to the thousands of senseless gun deaths and injuries in this country every year. We must continue to fight for sensible gun laws to help protect our families and our communities."

Motions filed by the Legal Aid Society in a variety of gun cases claim that the licensing process and the difficulty of obtaining licenses amount to a complete ban on the ability to legally possess firearms, which, under the Heller case would be unconstitutional. The standards that a person be of "good moral character" and that "no good cause" exist for the denial are, defense lawyers maintain, flawed, vague, and insufficient.

Despite that, the argument that there is an absolute, unrestricted constitutional right to possess weapons of any type, at any place and by any person, is not expected to succeed in any court or even be raised. Constitutional amendments, including the second, may be subject to some restrictions. For example, the First Amendment guarantees the right to freedom of speech, but "not a right to falsely yell fire in a crowded theater." These are not absolutes.

In the Heller decision, the Supreme Court expressly approved certain categories of denial used in New York including those applying to individuals who have a felony record or a mental health disability. It is considered unlikely that a license would be granted to anyone who has ever been arrested, lives with anyone with a criminal record or uses controlled substances. In the meantime, the National Rifle Association is planning its attacks, which will involve civil law suits, on various state laws. New York is not on its list.

Challenges to pending cases and future arrests involving firearms will be the subject of litigation for years before the constitutionality of New York's laws is decided. There could well be more trips to the Supreme Court. The court said as much: "Since this case represents this Court's first in-depth examination of the Second Amendment, one should not expect it to clarify the entire field."