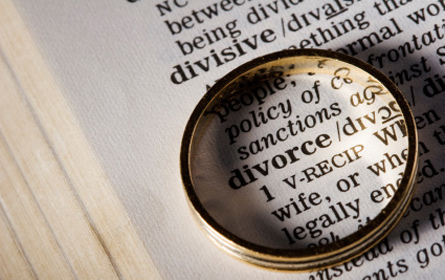 Forty-nine states in this country recognize "no fault" divorce or allow divorce for "irreconcilable differences." Only New York requires that one party in all contested divorces establish that the other was at "fault." Unless a prior separation agreement has been filed, the state's law requires the plaintiff partner prove the other spouse committed adultery, abandoned them, was cruel or in prison.

In this divorce case, euphemistically known as a "matrimonial" action, the plaintiff’s claim of abandonment or "constructive" abandonment was unsuccessful. Abandonment is defined as leaving without good reason and not returning for at least a year. In cases involving so-called constructive abandonment, the plaintiff alleges and proves that the defendant abandoned him or her unjustifiably by refusing, for at least one year, to have sexual relations despite repeated demands.

In her complaint, the wife, Novel Davis, did not allege that her husband, Shepherd Davis, refused to engage in sexual relations with her, but rather that he refused to participate in a mutual social life, such as dining together and sharing holidays and celebrations. Granting a divorce on this basis would, the court found, have the effect of expanding the grounds for divorce, which the court does not have the power to do.

"The plaintiff's allegation of social abandonment may appropriately be viewed as merely another way of claiming 'irreconcilable differences’ between spouses that do not recognize a cognizable ground for a divorce,” wrote Justice Mark Dillon of the Supreme Court Appellate Division, 2nd Department.

Novel Davis also had complained that her spouse's rejections constituted cruelty and inhuman treatment, but the cruel and inhuman allegation was not before the Appellate Division, so the decision concerned only the constructive abandonment claim.

"The essence of abandonment is the refusal of one spouse to fulfill 'basic obligations springing from the marital contract,'" the court said. Since the case did not involve one spouse leaving the home without good reason or locking the other spouse out of the marital home, the issue in Davis v. Davis, the court said, is whether refusal to share a life is as legally significant as refusal to have sex.

Since 1926, abandonment in New York has been extended to "constructive" abandonment, which has meant the unjustified, willful, continual denial of sexual relations. The original case, though, involved a refusal to consummate a marriage until a religious ceremony was held.

In 1960, the New York State Court of Appeals noted that marriage "involves something far more fundamental than mere physical propensity, and, as a consequence, abandonment is not limited to mere technical physical separation.” The Court of Appeals theory in that case held that the denial of “a marital right strikes at the institution of marriage," and therefore the refusal by one to engage in a sexual relation “undermines the central structure of marriage.”

In explaining the rationale for not extending the definition of abandonment further in the Davis case, Dillon wrote for the court that the legislature has never expanded the definition of abandonment beyond its literal meaning, even though the Court of Appeals did extend its meaning to constructive abandonment or denial of sex. Allowing divorce on the grounds of "social abandonment," he said, would be the same as permitting divorce on the basis of "irreconcilable differences," which is not recognized as a basis for divorce in New York.

The Appellate Division also relied on the longevity of the current definitions. Since the definitions were long-standing, the judges ruled, there is nothing to suggest that the meaning has changed. In addition, broadening the grounds for divorce would usurp legislative function.

Returning to the 1960 language of the Court of Appeals, the Brooklyn court reiterated, "Sexual relations between a man and woman are given a social and legally sanctioned status only when they take place in marriage and in turn, marriage itself distinguished from all other social relations by the role sexual intercourse between parties plays in it."

Fifty years later, the current decision adopts that thinking, though it adds, "Social interaction between spouses, while certainly important to a healthy marital relationship, receives less legal recognition and protection."