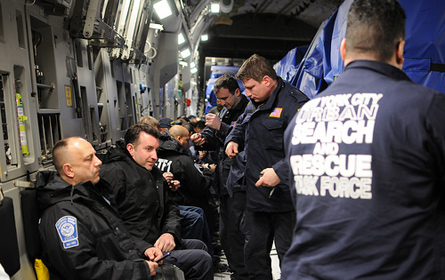 The team saved six lives including two children. Three victims were trapped beneath a collapsed grocery store, a middle-aged man was caught under the wreckage of a four-story building, and a young brother and sister were trapped under rubble for eight days. The children's father had been digging with a crowbar that whole time and passing water through a small opening to his children, miraculously keeping them alive. The eight-year-old boy, Kiki, and his ten-year-old sister, Sabrina, emerged extremely dehydrated but, "other than that, they looked like they were ready to play when they came out of the hole," Battalion Chief Joe Downey reported on the fire department's website.

As he was being pulled from the rubble, Kiki flashed a broad smile and raised his arms above his head in triumph as rescuers cheered. "It was the most incredible feeling," said Downey.

In situations such as this, speed is critical to saving as many lives as possible, and so this team mobilized shortly after the quake struck. But how are teams like New York Task Force 1 organized so rapidly, how do they carry out their operations, and who is responsible for their oversight and costs?

New York Task Force One is managed by the city Office of Emergency Management. This team is one of 28 emergency response teams sponsored by the Federal Emergency Management Agency that are "strategically located throughout the United States" and "can be deployed within six hours of activation," according to the Office of Emergency Management website. In 1989, FEMA established the National Urban Search and Rescue Response System to assemble "local emergency services personnel into integrated disaster response task forces." This was expanded upon in 1991 in the Federal Response Plan, which sponsored the creation of such task forces around the country including New York's.

The federal government, not the city or the state, funds, trains and has the authority to activate these task forces in the event of disasters, natural or otherwise. "The team is funded by, coordinated and overseen by FEMA," said Seth Andrews, deputy press secretary for the Office of Emergency Management. But the city manages "communication between FEMA and the team" and "coordinating within the team itself." This, Andrews said, can include "everything from logistics for food [and] air transportation" to ensure that "team members can show up, pack up their things, load up their equipment and they can get to where they need to be."

The task force includes approximately 220 members from the police and fire departments that can be summoned for rescue operations. The state of New York has another task force, New York Task Force 2 based in the Albany area, but they were not activated for this crisis.

New York 1 can deploy either as a light task force of 34 people or a heavy task force of 80. Workers include emergency physicians, paramedics, structural engineers, hazardous materials technicians, heavy equipment operators, and specialists in canine units, as well as experts on communications, planning, and logistics.

"You do have some people that are there almost, in a sense, behind the scenes, that are helping to coordinate logistics, getting camp set up, things like that," said Andrews.

For their mission in Haiti, the city's task force included 76 members of the police and fire departments and four canine units. They brought 20 tons of the latest technology and equipment including medical supplies and specialized rescue tools. The task force took microphones sensitive enough to detect human breathing, personal protection equipment, tents, power and ready-to-eat meals as well as listening devices, infrared cameras and motion detectors.

Four canines accompanied the team. "The canines that they traveled with are unique," Andrews said. "There are no other in the country of their kind. They are dual-trained meaning that these are regular patrol dogs so when they’re out here in the city they’re trained to apprehend criminals. But they're also cross-trained to be able to sniff out a human body that's still alive, they can detect a heartbeat."

New York Task Force 1 participates in exercises during the year as a unit and "within their respective agencies, they do extensive training on a day to day basis," according to Andrews. In November 2009, its members even participated in an exercise that tested the team’s response to a simulated earthquake.

The last time that the task force deployed was in 2008 for assistance after Hurricanes Ike and Gustav. Similar rescue teams have been utilized after catastrophes like the Oklahoma City bombing in 1995 and the 2001 attacks on the World Trade Center and the Pentagon. Though most fire departments are capable of "performing rescues in light to medium-sized construction collapses," only the urban search and rescue task forces have all the equipment and techniques necessary to operate within the most dangerous conditions according to the Office of Emergency Management website.

Led by battalion Chief Joe Downey, New York's team flew into Haiti in C-17 cargo planes on Jan. 16, two days after they were activated and scheduled to depart. The delay was due to "bottlenecking in and around the Port-au-Prince airport," said Andrews. The airport there, he said, was "jam packed because they had only one air strip that was open at the time."

Upon landing, the task force divided into two groups with each working 12-hour shifts. They relied on local residents to direct them to where people were trapped. Team members usually have enough equipment to be self-sufficient for up to 72 hours and can be re-supplied beyond that mark so that they are not a drain on important local resources but in Haiti, the team had enough supplies to sustain themselves for a week.

In Haiti, the U.S. rescue teams worked under the U.S. Agency for International Development, the State Department organization leading the relief effort. Similar FEMA-sponsored teams, including the Los Angeles County Urban Search and Rescue Task Force and the Virginia Task Force 2 Urban Search and Rescue team have helped in the ravaged Haitian Capital, Port-au-Prince. The country was divided into a grid so that the 46 teams from around the world were responsible for a designated area. These teams have rescued 132 individuals, with 47 saved by U.S. task forces, according to the mayor’s office.

The New York team returned home Jan, 24 after spending a week helping victims of the earthquake. On Jan. 26, the members of New York Task Force 1 were awarded commendations at City Hall for all their rescue efforts and for saving the lives of six people buried under rubble in Port-au-Prince.

"We are glad to have the members of our Urban Search and Rescue Team, who worked on the front lines of the global rescue effort in Haiti, back home, safe and sound," Mayor Michael Bloomberg said at the ceremony. "There's an awful lot of work ahead in Haiti, and an awful lot of mourning, but today, we thought it was important to recognize the members of Task Force One, who've made us proud once again."

Bloomberg honored not only the human members of NY-TF1 but also its canines with four specially made edible keys to the city for its German shepherds. "Six survivors out of thousands lost may not seem significant, but I think it's fair to say, to the six people and their loved ones it really means everything," the mayor said.

Task force member Lieutenant Bill Redding paraphrased a Winston Churchill quote when speaking to DNAinfo about the team's work in Haiti. “To every person comes a time in their life when they're tapped on the shoulder and asked to do something unique and specific to their talents. What a shame if that moment finds them unprepared for what would've been their finest hour," Redding said. "This team was tapped on the shoulder and, in my vision, it was their finest hour to date."