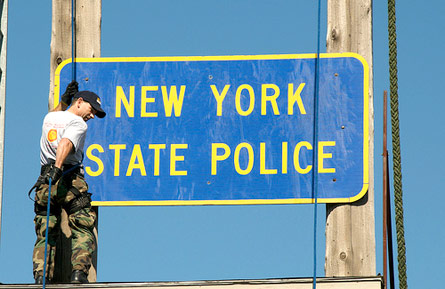 When the New York Times revealed that state troopers had been part of an alleged effort by Gov. David Paterson's office to convince a woman not to seek an order of protection against his aide David Johnson, not many around Albany were surprised that members of the executive services detail were involved.

In recent years, the detail has been implicated in a number of scandals involving the political influence of the governors it is charged with protecting.

In fact, a number of legislators pushing for a commission to look into how politics influences state troopers say they have been concerned with the issue for quite some time. Sen. Eric Adams and Assemblyman Hakeem Jeffries say they has planned to introduce the legislation to create the commission well before the Paterson incident hit the front page of the Times. The latest revelations, though, have given their efforts increased prominence and prompted other politicians and law enforcement officials to consider how New York runs its state police force.

State Police Commissioner Harry Corrbitt's explanation of the situation to the New York Times didn't help ease anyone's concern. "We never pressured her, at least what I was advised; we never pressured her not to press charges," Corbitt, who Paterson appointed, said. "We just gave her options."

Corbitt even said the detail's actions were standard operating procedure. "It's typical if it involves anything that might involve a media event; it doesn't have to be a senior official to the governor," Corbitt told the Times. "It could be a politician or a high-profile physician, anything that might pique interest in the press, because it's a special circumstance." Experts and legislators say that that is far from standard operating procedure.

Deputy Secretary for Public Safety Denise O'Donnell, who was Corbitt's boss, was so upset about the situation that she resigned. O'Donnell said Corbitt had assured her previously that state police had no contact with the woman in the case, Sher-unna Booker. Corbitt, who resigned this week, said O'Donnell had misunderstood him.

Regardless of exactly who directed the state police to visit Booker -- one of the issues now under investigation by Attorney General Andrew Cuomo -- their action clearly did not represent standard operating procedure and raises troubling question about political influence on the agency.

This issue of politicians' influencing the leadership of the state police has reared its ugly head multiple times over the years, under three different governors, despite action by two of them to stop it. Former Gov. Eliot Spitzer put O'Donnell in charge of the state police in reaction to the Troopergate scandal. In that case, Spitzer's office instructed troopers to keep tabs on former Sen. Majority Leader Joe Bruno. Locked in a bitter political battle with Bruno, Spitzer hoped to discredit the senator for his use of state-paid travel to political events.

But O'Donnell's appointment didn't fix things. In 2008 when Paterson became governor, he asked Cuomo to look into whether there was a group of rogue, politically motivated troopers inside the capitol detail. His new superintendent, Corbitt, increased the size of the executive detail and tried to change the culture of the force with new training.

Cuomo's report found no criminal wrongdoing among troopers but did conclude that the state police leadership had been greatly influenced by politics. Cuomo's report said that former State Police Superintendent Wayne Bennett, who served under Gov. George Pataki, ordered troopers to hide a report detailing a domestic violence incident that took place at the home of former U.S. Rep. John Sweeney -- the man labeled Congressman Kick Ass by President George W. Bush for his role in the Brooks Brothers Riot during the Florida vote recount in 2000.

Start at the Top

The recent revelations by the New York Times make it clear that politics still have a powerful influence over state police actions. Members of Paterson's personal security detail visited the woman who was seeking an order of protection against his aide. Experts say the kind of troopers who get assigned to security details such as Paterson's earn their position through their political connections. Now Adams and Jefferies propose creation of a commission that will "investigate systematic misconduct, abuse of power and inappropriate political intervention with respect to the New York State Police."

The commission would be modeled after the Knapp Commission, which was used to investigate corruption in the city police in the 1970s following the revelations by officer Frank Serpico .

"The role of the New York State Police must be free from the influence of politics," said Adams, a former captain in the New York City Police Department. "The state police cannot serve, protect and defend the people if the integrity of their decisions is hamstrung by political concerns. The commission established by our legislation will guarantee the independence of the state police and ensure that its focus on law enforcement and crime prevention remains undiluted by any outside pressure or manipulation."

The State Police Benevolent Association, the union for the troopers, supports the idea. "The rank-and-file troopers have not been involved in the reported political manipulation," said PBA President Thomas H. Mungeer. "Any commission that would potentially review the New York State Police should do so starting at the top management. However, if a progressive and strong leader is appointed as superintendent of the state police in the meantime, that may negate the need for such a commission."

Terry O'Neill, a public safety advocate and frequent Albany commentator, agrees that the review should start at the top. "The organization does not need to be restructured. The state police is a very healthy, sound organization. The problems seem to stem from how they interact with the first family. Something is going on between the second floor and the third, where the superintendent's office is." O'Neill also said he thinks a strong superintendent could install the discipline the organization needs.

"A lot of us worry that the brand of the state police is being tarnished with what is going on," he said "I don't know if this is criminal or not, but this is unethical," said O'Neill. "Everyone should be on their best behavior, and some people need to be fired."

O'Neill, who worked as a legal advisor for the New York State Division of Criminal Justice Services under Gov. Mario Cuomo, said he never saw this kind of thing go on between troopers and Cuomo's office during his time at the capitol. "Back to the very beginning, state troopers have prided themselves on their relationship with the governor," said O'Neill, "but this is making people look bad."

Eugene O'Donnell, a professor at John Jay College of Criminal Justice and a city police department veteran (and no relation to Denise), said he also believes the new commission should focus on leadership. But, he said, picking those who would sit on the commission is critical. "You need to staff the commission with former FBI agents, people from law enforcement -- rock solid police, judges -- people who don't take calls from people, people who can say no to a politician."

Secondly, he said, the commission should consider establishing rules to limit contact between the executive branch and the state police superintendent. "You need to clear things up and make sure there are only two times when the governor should speak to the superintendent: when he hires him and when he fires him. It should work something like the Bloomberg-Kelly model, the opposite of the Giuliani-Kerick model."

Maria Haberfeld, professor of police science at John Jay College of Criminal Justice, said that she would advocate changing how the superintendent is appointed. "It is very hard to change police culture. The police are a very political organization -- people may not realize it but they are appointed by politicians. So if you want to change the culture you have to change this -- not so much the organizational structure, but who heads it."

Haberfeld said she thinks an external commission made up of "individuals who can be held accountable for their choices" should be created to name a superintendent. "Until the appointment isn't in the hands of one individual, nothing will change," said Haberfeld.

Eugene O'Donnell disagrees. He points to former Los Angeles Police Chief Daryl Gates, who was appointed by commission, but according to O'Donnell, was answerable to no one but himself.

What should a commission look for in a candidate for the job? "You need to look for a candidate who has a history of questioning the politicians. You can find it in their file. I believe in promoting from within the organization, but you don't want someone with a perfect file," said Haberfeld. "You don't want someone with a stellar record, because I would say this is someone who will do anything they are told. I would look for someone with a history of being independent, not just doing what the mayor or governor tell them. You're looking for a troublemaker -- not the company man or woman who will always do what they are told."

Eugene O'Donnell and others have suggested that reducing the 200-trooper executive detail might help the situation. "Two hundred people! That is the police force of White Plains protecting one person. It goes to their head," O'Donnell said. "That's why you have New Jersey Gov. Jon Corzine speeding down the highway to get to the Rotary Club. He's got guys with receivers in their ear. It makes these guys feel above the law."

State police officials have pointed out that troopers from the executive detail aren't assigned solely to protect Paterson but also to provide security for Empire State Plaza, the Executive Mansion, the State Office Campus and Paterson's office in Manhattan.

Nevertheless, O'Donnell suggested there might be ways to reduce the reliance on state troopers as members of the detail for these tasks. Others have suggested rotating the troopers assigned to the detail out on a regular basis.

No matter the solution, legislators, experts and law enforcement officials say that action needs to be taken as quickly as possible to restore faith in the state police and to set an example for those inside the organization. "It's important to address this; this goes all the way down to the street cop who says, 'Oh, this is the way it works!" said O'Donnell. "'You have to be connected.' Well I don't think this is the way it works, but a statement needs to be made so that this does not affect morale and job performance -- 'cause you will get cops who say, 'See, this is how it works! I told you so.'"

Correction: This story originally incorrectly described the Knapp Commission. It has been conrrected.