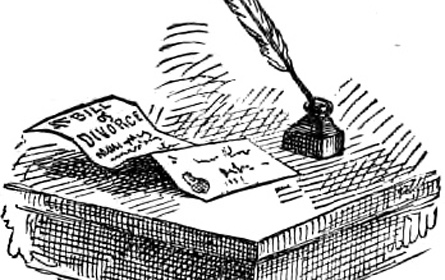 In New York State -- and in New York only -- a contested divorce requires proof of fault. One party must allege and prove that the other spouse's conduct violated one of the grounds for divorce, such as adultery, cruelty, abandonment, formal separation for a year.

The question of who is at fault, though, and how serious the conduct, however, is almost never a factor in the distribution of marital property and assets and will not defeat equitable distribution, the system which guides the division of marital property in New York. (New York is not a 50-50 state.) This was made clear last month by the state's highest court, the Court of Appeals in Howard S. v. Lillian S. (no further identification is provided).

[For more on New York's divorce laws and efforts to change it, see No Fault Divorce Creates Strange Bedfellows.]

Through a DNA test, Howard learned that the youngest child of the marriage, a 3-year-old girl the couple had raised together, along with their other children, was actually the child of Lillian and another man. Howard was not the girl's father. He sued Lillian for divorce based on cruelty, adultery and fraud, the fraud being her insistence that she had been a "faithful" wife. She countersued charging abandonment.

But fraud is not one of the causes of action for divorce so that became a separate case in which Howard wanted "discovery," or pre-trial examination of Lillian and perhaps other witnesses. He was seeking information on Lillian's other relationships, the fault that he would try to use to block equitable distribution of the couple's assets and prevent her from getting what she might otherwise be entitled to.

He could not have gotten this information within the direct divorce proceedings. Since even the adultery charge would not lead to discovery on his wife's "misconduct" or have the desired effect on distribution of assets, his approach had two prongs -- to use the allegation of fraud to gain disclosure about Lillian's other relationships and then gain the assets by establishing her fault.

In the meantime, Howard demanded the return of money spent on "collaborative" justice, such as mediation, as well as his support of another man's biological child.

The statute in the Domestic Relations Law concerning the distribution of marital assets, says that in addition to the basic issues such as age, health, duration of marriage and contributions to marriage, a judge may consider "any factor which the court finds to be just and proper."

In the opinion, Chief Judge Jonathan Lippman clarified any confusion on the connection between fault and equitable distribution. The opinion, from which only one of the seven Court of Appeals judges dissented, clearly stated, "We have rejected the notion that marital fault is a 'just and proper' consideration, [e]xcept in egregious cases which shock the conscience of the court."

Before reaching the highest court, two lower courts had found that Lillian's acts did not rise to the level of "egregious fault," which might affect her financial entitlements. In other words, having a child outside the marriage and failing to disclose that to the other spouse for three years, does not figure into the calculus of equitable distribution of marital property.

Ruling this scenario did not constitute egregious conduct, the chief judge, in his opinion, gave examples of those few cases that have held conduct to be egregious. They all involved extreme violence, and in one case, attempting to bribe a judge.

In the 2002 case of Theresa Havell v. Aftab Islam, a Manhattan judge considered the usual factors in determining what would be an equitable distribution of the couple's assets. In that case, the court also considered the defendant husband's fault -- verbal and physical abuse of wife and children, including the husband's attempt to kill his wife and almost succeeding. His violent attacks did cause severe and permanent injuries to his wife, and occurred in the presence of their children.

After trial, Havell was awarded more than 95 percent of the estimated $17 million in marital assets, most of which she had contributed), with the judge calling her husband's actions so egregious as to shock the conscience.

An irony here is that the same judge, Jacqueline W. Silbermann, who found Aftab Islam's actions egregious, has since retired from the bench and is a matrimonial lawyer in private practice. It was she who represented Howard S. in his appeal where the claim of egregious conduct was rejected.