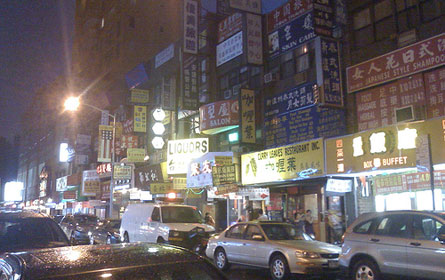 Photo by Meg McCarron
A brutal rape and murder this spring has prompted some Flushing residents to wonder about the safety of their neighborhood.

Susan Ma does not like to go out at night in Flushing. In fact, she always tries to get home before dark or asks her husband or friends to drive or to walk with her.

She grew even more concerned after she saw the news about the recent rape and murder of Yu Yao, a 23-year-old Chinese woman, on 41st Road, just blocks away from her house on Main Street and Franklin Avenue.

"There are too many people here, too many different kinds of people," said Ma, a native of China who moved to Flushing two years ago. "Every woman has to be aware when they go out at night."

When Ma read about a free self-defense class in the Chinese-language Sing Tao Daily, a popular Chinese-language newspaper, she immediately signed up. The class was prompted by the brutal attack on Yao. The suspect is 28-year-old Carlos Salazar Cruz, a fish market worker who is charged with second-degree murder.

Many people in this primarily immigrant community were shocked by the violent attack because Flushing is generally considered a safe area. According to police statistics, there were three murders, 13 rapes and 276 robberies in areas covered by the 109th Precinct in 2009, while nearby Elmhurst and Corona had six murders, 32 rapes and 332 robberies. In the 115th Precinct, which covers East Elmhurst, North Corona and Jackson Heights, there were four murders, 24 rapes, and 435 robberies.

Although many saw Yao's murder as an isolated incident, the community has not taken it lightly. Several local martial artists and community groups have started offering free self-defense classes. A volunteer neighborhood watch group has been patrolling downtown Flushing and giving out whistles in the hopes of raising safety awareness and fostering a community spirit where residents will look out for one another -- and speak up.

The self-defense classes, which began in late May, are taught by Simon Li of the Asian Cultural Federation and Wing Yu of the Wing Chun Ip Chun Academy. Each class meets for one hour per week and lasts four weeks. So far more than 30 people have signed up and two classes are in session.

"People were not so interested in learning self-defense before the murder," said Li, a martial artist and a native of Hong Kong who has been teaching martial arts in Flushing for 15 years. "After the newspapers did a report on us, our phone has been ringing off the hook."

The primary goal of the class, Li said, is to teach the students how to handle attacks s and escape. He said more classes will be offered by his fellow martial artists in other boroughs.

Many students in the class find it helpful.

"Since we women have no strength, we learned how to twist their arm and borrow their strength to push them away," said Annie Fung, a housewife in her 50s and a native of Hong Kong.

Jane Wu, 65, a native of Hong Kong and a longtime New York resident, travels from midtown Manhattan to attend the class. She remembers being robbed on the Lower East Side many years ago and was saddened by Yao’s death.

"If she had learned how to defend herself, maybe her life could have been spared,” said Wu.

The volunteer group, led by Michael Chu of the Council of Chinese-American Associations, officially kicked off the patrol on May 24. Every evening five or six members of the group are dispatched to patrol the residential neighborhood between Main Street and College Point Boulevard from 8 to 10 p.m.

Chu sees certain residents of the area as being particularly vulnerable. "Immigrants tend to be easy targets," he said. "They don't speak English well. They don't report to the police. They carry cash more often, and they are less resistant."

The 109th Precinct runs an auxiliary police program, but it requires fluency in reading and written English and permanent residency or citizenship, preventing many people in Flushing from joining.

"Many people in the community wanted to join the auxiliary police but they have language issues," said Chu, who hopes to work alongside the 109th Precinct.

Interest in community safety appears high. "So far we already have about 140 volunteers," said Chu, who has given out more than 500 whistles and is ordering additional 5,000 from China. "We are hoping to get at least 300 to 500 volunteers so this patrol will continue far beyond this tragedy."

While Yao's murder might have been an isolated incident, her death raised the question of whether Asian immigrants don't speak up when they see something amiss. Local Chinese newspapers reported she was spotted wrestling with her killer before she was dragged into a back alley but no one helped her. The 109th Precinct said they received only one phone call about the attack, and so far only one witness has come forward to identify the killer.

(For a report in Chinese on the response, go here.)

Ki-soo Kim, the 109th Precinct's community affairs officer, said immigrants should not be afraid to contact the police. "We are not part of the federal government, we don't enforce immigration law," he said. Kim added that Mayor Michael Bloomberg's Executive Order 41, which requires that police keep the immigration status of victims and witnesses of crimes confidential, would bar police from reporting an undocumented immigrant who told them of a crime.

Elected officials also urged the public to report to the police when they see something unusual.

Grace Meng, Flushing's state Assembly member who helped Yao's mother obtain a visa to come to New York and accompanied her to court hearings, urged the public to report crimes to the police.

"When we are asked as representatives why we don't have more police presence, if you don't report it, the NYPD doesn't have the statistics, then we can't ask for more police on the street," Meng said.

She also attributed the lack of action from bystanders to the transient mentality common in immigrant communities.

"Our culture needs to improve. â€¦ If you community is not safe and the streets around you are not clean, then it does directly affect you," said Meng. "Some people might not see this as their home. They see it as a place to make money and send home. It is disappointing. â€¦ America is our new home, and we have to treat it as such."

As the community delves into soul-searching, people fend for their own safety by being alert and stay out of harm's way.

"In this tough economy, some people might turn to criminal acts out of desperation," said Fung, the housewife. "When you see strange people around you, go to a place where there are more lights and more people."