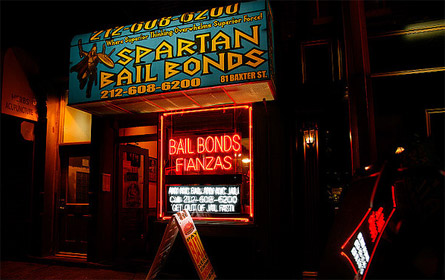 Human Rights Watch, known internationally for fighting degradation and institutional suffering among the people of Africa, Indonesia, Latin America and other developing areas of the world, has turned its sights to New York City. The organization has issued a report -- to be made public today -- on bail and arraignment practices in our Criminal Courts. Following a two-year study, the report concludes that bail results in the incarceration of poor people, almost all of whom are black or Hispanic and are charged with non-violent crimes.

Human Rights Watch has found that every year the bail system in New York City penalizes thousands of poor people with pre-trial detention when they are arrested and charged with minor crimes. In these instances, the judges often require a fairly small amount of bail money. But that often is still more than the individuals and families involved can afford. (Bail is intended to insure that defendants return to court for trial after their arrest or risk losing the money they have posted.)

The Price of Freedom

"The Price of Freedom: Bail and Pretrial Detention of Low-Income Non-felony Defendants in New York City," reports that 87 percent of defendants whose bail was set at $1,000 or less were jailed following their first court appearance for arraignment and remained incarcerated for an average of almost 16 days. Their crimes: shoplifting, prostitution, turnstile jumping, marijuana, possession of small quantities of drugs, trespassing. None were violent, and none involved weapons. In effect, these people served their sentences before ever been tried, much less convicted, since in many of the cases, the sentences eventually imposed would likely have been less than the time they spent at Rikers Island. These non-felony defendants awaiting trial constitute approximately one quarter of the population on Rikers.

The Human Rights Watch analysis found that the city could have saved $42 million in 2008 if the 16,649 non-felony defendants arrested that year who were unable to make bail of $1,000 or less had been released on their own recognizance or under some other alternative to incarceration. The report urges the city to create such an alternative. The cost of keeping a person confined in a city jail is approximately $73,000 a year.

According to Jamie Fellner, senior counsel at the U.S. Program at Human Watch who conducted the study and wrote the report, "Bail punishes the poor because they cannot afford to buy their pretrial freedom." Fellner found that judges sitting in Criminal Court tend to set bail at amounts that are unaffordable for indigent defendants.

"The pretrial incarceration of persons presumed innocent of minor crimes is a disproportionate and needless curtailment of liberty that is difficult to square with fundamental notions of fairness," Fellner's report concludes.

While the report did not provide a breakdown for the races of people affected by the bail policy it noted, "Although blacks and Hispanics combined constitute only 51 percent of New York City's population population, aggressive law enforcement in minority neighborhoods has led to them comprising 82.4 percent of all arrestees and a similar percentage of all criminal defendants."

It also cites city Department of Correction figures that 88 percent of people held on bail of $1,000 or less are black and Hispanic.

The only way a defendant charged with a misdemeanor or violation such as disorderly conduct can get out of jail quickly when a judge sets bail he or she cannot raise, is to plead guilty. Pleading guilty can mean walking out of the courthouse -- particularly if this is the first person's first arrest -- since many of the minor offenses do not carry any jail time, and the defendant has already served 24 hours by the time he or she appears in court. Others pleading guilty may get an Adjournment in Contemplation of Dismissal, meaning if they don't get arrested again within the next six months their case is automatically dismissed and sealed or they may receive a conditional or unconditional discharge.

Meanwhile, the defendant who asserts the presumption of innocence remains behind bars. Of the 19,137 non-felony defendants arrested in 2008 whose bail was $1,000 or less, 87 percent were not able to post that and had no one else who could. This helps explain why 99.6 percent of the convictions for misdemeanors are by guilty plea.

The report posits, "Judges may intentionally set bail at a level beyond a defendant's means when they believe the defendant will not return to court if released. Human Rights Watch found, however, that "failure to appear is not a widespread problem."

To some extent, the report is critical of judges for failing to use alternative means of assuring that an individual will return. The statutory alternative most readily available -- and which the report encourages -- is unsecured appearance bonds. These require that the defendant or someone else, such as a parent, signs a promise to pay a certain sum of money in the event that the defendant does abscond. This, often used in federal courts, avoids the need for money upfront. Many judges are unfamiliar with the possibilities and also are overwhelmed with the number of cases during an arraignment session. The unsecured bond does entail some extra paperwork for the clerical staff, but is till one of the recommendations in the report.

The second recommendation is for the city to develop pretrial supervised release programs that presumably would monitor defendants or require them to report in. The cost of such programs would, Human Rights Watch concludes, be far less than the cost of incarceration. And they would not infringe on the constitutional presumption of innocence by permitting pretrial detention based on poverty.

Emily Jane Goodman is a New York State Supreme Court justice. She was interviewed for the Human Right Watch report and read it before its publication.