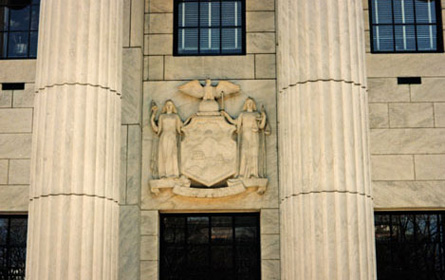 Photo New York State courts
Overturning lower courts, the state's highest bench issued a ruling that will allow Douglas Warney, who was convicted on the basis of what could have been a coerced confession, to seek financial compensation from the state.

Recently Gotham Gazette reported on the confession of Douglas Warney, who was convicted for a 1996 murder in Rochester but was later exonerated when DNA determined he was actually innocent.

Nevertheless, two New York courts found that he should not receive a state settlement compensating him for his wrongful conviction and the subsequent nine years he spent in prison. The court said his false confession constituted misconduct and so barred him from receiving compensation.

In late March, though, the state's highest court ruled in Warney's favor, reversing the lower courts' dismissal of his claim.

Warney's lawsuit seeking compensation had been brought in the Court of Claims, which hears cases against the state. In its ruling, the court is to rely on the Court of Claims Act and the Unjust Conviction and Imprisonment Act, which requires that a claimant seeking compensation had been convicted of a crime, sentenced to imprisonment and served at least part of the sentence. In addition, in order to receive a settlement, the claimant must have been pardoned on the ground of innocence or had a conviction that was reversed, vacated or dismissed.

The Court of Claims, however, rejected Warney's suit because language in the statute bars compensation for wrongful convictions that were caused by the defendant's own "misconduct." In other words, although DNA unequivocally proved that Warney is innocent, the confession he gave the police, which was used to convict him, constituted "misconduct" in the view of the Court of Claims judge, Renee Forgensi Minarik.

The specific issue confronting the Court of Appeals was whether Minarik had improperly dismissed Warney's case without allowing the litigation to proceed further. The judge had decided that Warney's papers at the earliest stage of litigation should disclose in detail how his confession came about. The Court of Appeals opinion written by Judge Carmen Ciparick/a> agreed with Warney's counsel, Peter Neufeld, that Warney did not have to submit his evidentiary proof that early in the litigation proceedings.

Judge Robert Smith, who appeared particularly concerned when the case was argued in Albany, had posed many questions to the state's attorney, Alison Nathan, who is expected to become a federal judge. Smith asked how Warney could have confessed to specific facts of the crime that he couldn't have known both because of his limited mental abilities and because there is no question that he is innocent. Smith questioned whether the police interrogators gave Warney information, known only to them and the real perpetrator, that Warney then parroted back when asked about the murder.

At oral arguments and in his concurring opinion, Smith referred to the meaning of "coerced confession" and defined it as the sort of "calculated manipulation that appears present here." In general, though, Smith concurred with the majority opinion, which relied largely on procedural technicalities surrounding the dismissal. It did not give Warney's lawyers an opportunity to prove that it was not his acts that constituted misconduct. Smith feared that would lead to more general arguments against dismissal.

Warney, who had a history of making false police reports, has claimed that he had been denied access to a lawyer after police detained him for questioning in the murder. Warney eventually admitted to the murder in an unusually detailed confession -- one containing details that only the true perpetrator and the police could have known. But after he was convicted and sentenced to 25 years to life, Warney, who was then represented by the Innocence Project, claimed innocence. It was nine years later that DNA testing excluded him as a match. His conviction was reversed based on newly discovered evidence.

In ruling on Warney's request for compensation, lower courts said Warney had not offered convincing evidence that the police must have fed him detail of the crime. Ciparick's opinion reversed the lower courts , which had said that Warney would have had to present convincing evidence in the initial litigation on a possible settlement that the police fed him the details.

The appeals court determined that Warney did not have to prove his case in the lower courts but simply provide enough evidence to keep the case in court for trial. In other words, the Court of Appeals found it was premature for the Court of Claims judge to decide that she was not convinced by the facts Warney presented.

In his submission to the Court of Claims, Warney maintained that his conviction "was the direct result of the intentional and malicious actions of members of the [police] who fabricated and coerced a false confession from ... a man whom they knew had a history of serious mental health problems."

Referring in his opinion to some of the details in the confession, Smith asks, as the prosecutor had asked the trial jury, how a man whose innocence has been established could have known some of these facts he presented during police questioning.

"It is hard," Smith writes, "to imagine an answer other than that he learned them from the police. ... The police took advantage of Warney's mental frailties to manipulate him into giving a confession that contained seemingly powerful evidence corroborating its truthfulness -- when, in fact, the police knew, the corroboration was worthless. ... This sort of police conduct, if proved at trial would be sufficient to show that Warney 'did not by has own conduct cause or bring about his conviction.'''

Answering a question asked at oral argument, Smith said a false confession that was not coerced could be a barrier to compensation from the state. But, he wrote, "A confession cannot fairly be called 'uncoerced' that results from the sort of calculated manipulation that appears to be present here -- even if the police did not actually beat or torture the confessor, or threaten to do so. "

As clear as he appears to be about Warney, Smith is at least equally concerned with discouraging "frivolous claims." "This case is easy, because this claimant appears ... to have an exceptionally strong case," Smith wrote. "Our decision today should not be read as implying that any claimant can, by skillful pleading, get a significantly weaker case past a motion to dismiss."

According to Neufeld approximately 25 percent of those individuals who have been exonerated had confessed to crimes they did not commit. This week, Jeffrey Deskovic, who spent 15 years in prison after being convicted of raping, beating and strangling a high school classmate, but was later exonerated by DNA testing, settled his federal civil rights case against Westchester County for $6.5 million.

While it is not every day that cases such as Warney's and Deskovic's are brought, Neufeld hopes that the opinion in Warney's suit will have an effect on other local cases and in other states. That is, while false confessions are not uncommon, they should not generally prevent an exonerated individual from claiming compensation. Certainly as Smith wrote, the wrongfully convicted should have their day in court and an opportunity to establish their claim.

Other claims, though, will wait for another day. The next question would involve whether there will be a trial in Warney v State of New York. According to Peter Neufeld, there have been no discussions with the state about how the case will proceed now that the Court of Appeals has reversed the dismissal. It is likely the two sides will reach a monetary settlement.