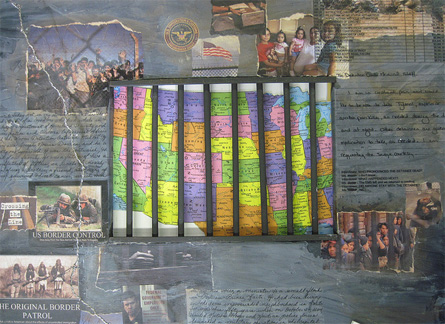 Photo by Craig Hennecke
Karen Barrueto created this artwork after visiting someone in a federal detention center for immigrants in south Texas.

Growing up in Mexico City, Ricardo Muniz dreamed about being able to just be himself someday. He always knew he was gay and was constantly subject to anti-gay slurs or even death threats.

"It's difficult to come out in Mexico," said Muniz. "I don't remember a happy childhood."

At 15, shortly after he came out, his mother was so concerned about his well being that she sent him to New York to live with his aunt. "I heard there is justice and people can be who they are regardless of their sexual orientation," said Muniz, now 25. "I wanted to start a new life in America, to be free."

But he didn't realize that the real America differed from the one he imagined. After spending 20 months in detention, Muniz now faces deportation back to Mexico -- even though he has not been convicted of any crime.

Muniz is one of many immigrants who face deportation after being caught up in the criminal justice system -- regardless of the charges against them and regardless of whether they are guilty. Under a federal program called the Criminal Alien Program, New York City law enforcement officials give the names of all people arrested to U.S. Immigration and Customs Enforcement, known as ICE. If ICE identifies someone as an immigrant, then the agency asks to transfer the person to federal facilities where the immigrant remains pending deportation hearings.

The city Department of Correction has given names to the federal government and allowed for the transfer of immigrants -- despite Mayor Michael Bloomberg's outspoken support for immigration and his issuance of Executive Order 41, which prohibits city workers from inquiring about immigration status when the people seek services from a city agency or witnesses a crime.

The trouble for Muniz began in July 2009 when he and his friends were attacked with bats and belts after a quarrel with a patron at a bar in Brooklyn, according to the report Muniz filed with the police. He suffered serious injury in his face and body.

"Ricardo was a victim of a hate crime," said Karina Claudio-Betancourt, a coordinator and interpreter at Make the Road New York, an advocacy group serving low-income people.

During the fight, the patron, a 65-year-old man, fell and injured his head, resulting in a lengthy hospital stay. A few weeks later, the police arrested Muniz and his friends, charging them with assault.

That began a nightmare that still haunts Muniz. He was held at Rikers Island pending trial because the U.S. Immigration and Customs Enforcement placed a detainer on him. A detainer is the document the federal government issues to a local jail or correctional facility when ICE wants custody of an immigrant, legal or illegal, in that facility for purposes of instituting removal proceedings.

"I had double difficulties because I am gay and Latino," said Muniz of his time in jail. "I was attacked numerous times and verbally abused. People stole my food and hit me because of my sexual orientation."

"It scarred me psychologically," added Muniz, who broke down several times during the interview. "This is the experience I would not wish on anyone."

In late March, he was exonerated and released, ending 20 months in jail for a crime that he never committed. But Muniz now faces deportation because he is undocumented.

Generally, when a deportable immigrant is released from jail because he or she finished his sentenced or was found innocent, the jail receives a request from ICE to detain the person for 48 hours. This gives ICE enough time to transfer this person to a federal facilities, many far from New York City. Once the arrestees are transferred to remote facilities, the chances of getting legal help become slim. Although the Criminal Alien Program may focus on undocumented immigrants, a report by the Immigration Policy Council found, it "identifies legal immigrants as well as unauthorized immigrants who are deportable based on the current crime or a prior crime."

Many of the detention facilities are in poor conditions and provide inadequate access to medical care or communications. According to the ICE's own figures, 120 immigrants died in detention between 2003 and March 2011.

The city does not have to comply with the federal government's request to hold the immigrant, said Bridget Kessler, a clinical teaching fellow for the Cardozo Law School Immigration Justice Clinic. She said a detainer from ICE is non-binding. In fact, many cities around the country have chosen not to participate in ICE's efforts, such as Berkeley, San Francisco, and Chicago.

In an op-ed column in the New York Times by Manhattan Borough President Scott Stringer and Andrew Friedman, a co-executive director of Make the Road New York, called on Bloomberg to follow these cities and change New York's policy.

Most of the immigrants transferred to federal custody and then deported "have their due process rights violated," they wrote. "The process is too rushed to ensure proper identification of status and identity, let alone confirmation of criminal background."

Stringer and Freidman charge that New York's involvement in the policy costs the city millions of dollars and deters immigrants from reporting crimes. But they say, "Perhaps what is most disturbing is that sometimes legal immigrants who have been convicted of no crime are caught up in this system."

The column also mentions the pressure on local governments to adopt Secure Communities, a program designed to identify immigrants in U.S. jails who are deportable under immigration law. Under Secure Communities, participating jails submit fingerprints of those arrested not only to criminal databases, but to immigration databases as well. The program is scheduled to be in every jail in the country by 2013.

Meanwhile, to counter the growing trend of adopting programs like Criminal Alien Program and Secure Communities, the Association for the Bar of the City of New York in February submitted a proposal to limit the collaboration between the city Department of Correction and ICE. The association instead calls for the city to allow immigrant New Yorkers to face deportation charges here, rather than in remote places far away from supportive family members and available pro bono or otherwise affordable legal counsel.

The mayor’s office, though, has defended its decision to cooperate with ICE, saying it is a public safety issue.

"The mayor’s Executive Order 41 allows immigrants to gain access to city services and report crimes with no fear of being questioned about immigration status,” John Feinblatt the mayor’s chief policy advisor and criminal justice coordinator wrote in a letter to the Times. "But when it comes to immigrants arrested for criminal activities, the executive order ensures cooperation with federal authorities."

Raising the specter of terrorism, Feinblatt continued, " As our country has learned tragically, when government agencies fail to cooperate and share information, not only is public safety compromised, so is national security."

To Muniz, such statements are ironic.

"I am a hard worker. People like me should be protected," he said. "In this country, you are supposed to be innocent before proven guilty. But it is the other way around."

Despite his misfortune, he has been luckier than most detainees. One of his friends also involved in the fight was deported before any trial. According to a report titled Jailed Without Justice released by Amnesty USA, more than 80 percent of immigrant detainees do not have legal representation.

"There are many people out there who cannot speak out," said Muniz. "Many of them are innocent. They are hardworking people just like everybody else."

Muniz thanked his mother for seeking help from non-profit organizations when his was in jail. The Cardozo Law School Immigration Justice Clinic has submitted a request asking ICE to release him because of the harsh circumstanced that he has been subject to and to stop the deportation proceeding. ICE granted the first request but denied the second.

Muniz is due back in court for his status hearing soon. Currently he is in a program called Alternative to Detention and is required to report to ICE on a regular basis.