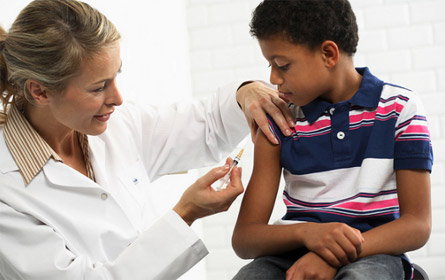 All children entering school in New York state must be immunized from certain diseases.

According to the state's Public Health Law, "No principal, teacher, owner or person in charge of a school shall permit any child to be admitted to such school, or to attend such school, without evidence of the child’s immunization against" polio, mumps, measles, diphtheria, rubella (or German measles), varicella (commonly known as chicken pox), hepatitis B, pertussis or whooping cough, tetanus, and, where applicable, influenza and pneumonia."

But the law goes on to say that the requirement "shall not apply to children whose parent, parents or guardian hold genuine and sincere religious beliefs, which are contrary to practices herein required."

In the last decade, the number of parents who refuse to vaccinate their children or who delay their vaccinations has risen. An increasing number of parents who object to inoculating their children are relying on the religious exemption in refusing immunization. Claims of religious prohibitions on vaccinations must be reviewed on a case-by-case basis, at the school and Department of Education or school district level, but sometimes there are lawsuits.

In July, the Brooklyn-based U.S. District Court for the Eastern District of New York rejected the claims of a Long Island couple who, beginning in 2007, asserted a religious basis for their refusal to immunize their daughter who was then almost 4 and an applicant to pre-kindergarten. After the school principal denied their request for an exemption, the parents declined a meeting with the superintendent, and in Caviezel v Great Neck Public Schools sued their local school system in an effort to enroll their child, identified in court records only as "CC," without complying with the inoculation requirement. The parents, whose three older children had been inoculated, now claimed to have a religious objection to immunization, and argued that they were protected by New York's statute and both the state and the U.S. Constitution.

At a court hearing, the mother, Martina Caviezel, testified, "I don't believe that vaccinations are necessary. I just believe if you look at the human being, if you look at the universe, we're divine, we're just divine. It's just the design is perfect. There's no other way to say it. It's just perfect. I’m a hypnobirthing practitioner. ... If I were to explain my religion, I probably would say I'm a Pantheist. I see God in everything. I believe God's present." She testified that in her religion she practiced mostly breathing, "because in breathing, to be present, I can be present to the presence of God. You could call it breathing meditation, yes, but I also mean just stopping for a moment and taking a breath and starting to hear the birds, starting to see the flowers, starting to notice people around you."

She told the court that she was ordained as a priest two years earlier by the Sanctuary of the Beloved, which is a "church," in Buffalo. According to the group's website, its priests "are not required to 'give up' anything they believe in or to resign from any other organizations. They are simply given an 'energy boost' to enhance the work they are already doing. There is no doctrine they must follow." Caviezel described her training as a minister as one-day preparation for energetic ordination.

The court found it significant that Martina Caviezel testified that, as far as she knows, the Sanctuary of the Beloved does not take any position on the propriety of vaccination and never instructed her that she could not get her children vaccinated. The court's decision also cited Caviezel's general objection to vaccinations because of her concern about their safety and possible link to autism.

Caviezel's lawyer attempted to convince the judge that the mother had tattoos that are actually prayers, and that the family engaged in "religious rituals, prayer, meditation, tattooing, fasting and the other types of activities" that would be "considered an indicia of religion." The court ruled that the lawyer had improperly raised this argument and so did not consider it.

In recent years, immunization has been challenged and refused by parents and advocates who believe that vaccines cause autism, although they have not been able to establish that scientifically. Those opposed to allowing children to remain susceptible to diseases, argue that those who are not immunized either because they object, or perhaps come from other parts of the world where particular diseases are common and vaccinations are not, present a danger to others within their own families and to the public. The concept that prevails, known as "herd immunity" is that there is a tipping point within a community at which a certain percentage of individuals lacking inoculation against a particular disease threatens other members of that community, including, for example, pregnant women or inoculated individuals who may have had an immunity to the vaccine.

Last month Judge Arthur Spatt dismissed the claims of Martina Caviezel and Andreas Schenck Caviezel as not being "religious in nature." His decision went beyond that, however, to rule, that despite the religious exemption granted by New York's legislature, the state's immunization requirement does not violate the Constitution’s First Amendment. He specifically rejected the claim that it did. Spatt referred to the U.S. Supreme Court which has not directly addressed the inoculation issue, but has stated, “Generally the right of parents to raise their children in accord with their personalized and religious beliefs must to yield the health of children is at risk or when there is a recognized threat to public safety."

According to the Spatt decision and other federal cases, "It has been settled law for many years that claims of religious freedom must give way in the face of the compelling interest of society in fighting the spread of contagious diseases through mandatory inoculation programs."

Another local federal decision held, "Society's compelling interest in preventing disease must override any personal opposition to immunization that some persons may possess. Therefore, the statutory exception must be restricted to persons whose opposition to immunization stems from 'religious’ belief'; not views founded upon medical, personal, philosophical or even moral considerations."

Still, the language in the Spatt opinion is the strongest on this issue so far. Under the U.S. Constitution, it holds, there is no religious basis to refuse immunization of children.