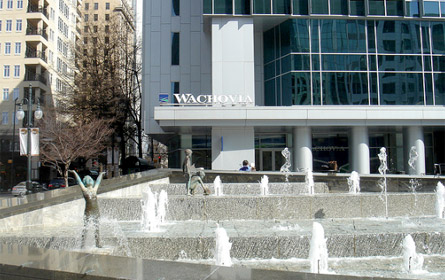 Photo by Mark Chang
A former Air Force reservist charged that Wachovia, now part of Wells Fargo, violated federal law when it essentially cut his pay and demoted him after he returned from active duty.

When Michael Serricchio was called up for active duty by the United States Air Force Reserve soon after Sept. 11, 2001, he left his job as a financial advisor at a Stamford, Conn., office of Wachovia Securities, LLC. Upon returning from military service in 2003 he claimed his original job, but the employer offered him an inferior and lower-paying position. Serricchio sued Wachovia alleging violation of the federal Uniformed Services Employment and Reemployment Rights Act or USERRA.

Last week the Manhattan-based U.S. Court of Appeals for the 2d Circuit, which covers Connecticut as well as New York and Vermont, ruled that the law guaranteed Serricchio reinstatement to his prior employment position or its equivalent and that Wachovia violated the law and the veteran's rights. Three appellate judges agreed with the findings of a lower federal court jury and judge that defendant Wachovia had violated the USERRA by failing to promptly rehire the plaintiff and to place him in a position of "seniority, status and pay," similar to what he left. It took six months to rehire him instead of the mandated two weeks, and he was not returned to his prior job.

The appeals court therefore affirmed the lower court including an award of $389,453 in back pay and, because the defendants acted willfully, an equal amount in damages. Wachovia was also ordered to pay Serricchio $12,300 a month for three months, while he caught up and could begin generating commissions again. The goal was to provide compensation that would be the equivalent of what he could have expected to earn had his employment not been interrupted by his military service. That came to $6,500 per month or approximately $78,000 per year in commissions.

The USERRA is one of a series of laws going back to World War II and amended during America's war in Vietnam. The purpose has been "to encourage military service by eliminating or minimizing the disadvantages to civilian careers; to minimize the disruption to the lives of service members and their employers by providing for the prompt reemployment of service members and to prohibit discrimination against service members."

Wachovia ignored that here, the courts determined. The bank had intentionally violated the federal law meant to protect men and women returning from the military service since he had been entitled to a prompt "opportunity to reenter the workforce with comparable earning potential and chance for advancement as his own book of business provided prior to his service, regardless of whether the same clients are in the substituted books." As described by U.S. District Court Judge Janet Arterton, the delayed "reinstatement offer [was one] that a reasonable person could regard as financially precarious and professionally degrading."

Prior to going on active duty, Serricchio was responsible for servicing as many as 200 accounts and for personally managing over $4 million dollars. But Wachovia argued it did not have to offer Serricchio the same commission opportunities he had before going on active duty and that USERRA provides only that an employee "who takes military leave will be returned to work at the same commission scale that he worked at prior to the leave, along with an initial monthly draw." In other words, the bank maintained it only had to provide Serricchio with the same commission structure but not with his prior book of business, upon the service member’s return from active duty.

A jury and judges disagreed. When Serricchio was honorably discharged in October 2003, Wachovia offered him something akin to an entry level position, the opportunity to make "cold calls" to rebuild his book of business, "a task," wrote the appellate court, "he had not been required to undertake since the early days in his career."

The trial judge sought input from the federal government, seeking interpretations of the law. The Department of Labor submitted that in addition to returning him to his seniority and entitlement to any benefits and opportunities, "Wachovia should have determined what Serricchio's book of business would have been but for his military service by examining how Serricchio's financial analysis fared during his absence, and then offered Serricchio his original and/or comparable client accounts that corresponded to his 'escalator position' book of business. If that was not possible the labor department continued, "Wachovia should have taken steps to restore Serricchio to a position of like 'pay,' such as paying him an appropriate interim salary or offering him other opportunities for additional compensation while he built up his book of business to the requisite level."

The department stated that Wachovia violated USERRA when it required Serricchio to "cold call" to rebuild his client accounts. "This requirement diminished Serricchio’s level of responsibility, his position vis-a-vis other employees, and his opportunity for advancement," it said.

While the act does contain an exception "if the employer’s circumstances have so changed as to make such reemployment impossible or unreasonable," Wachovia did not raise that point in a timely fashion and therefore could not pursue it or seek a finding that it did or did not have merit.

(In the years since Wachovia, once the nation's fourth largest bank, teetered on the brink of failure until it was taken over by Wells Fargo.)

The three-judge appellate bench composed of judges Rosemary Pooler, Richard Wesley and John Koeltl, whose opinions are binding on federal courts within this circuit, concluded that the relevant statute entitles a returning service member to the "seniority and other rights and benefits determined by seniority that the person held on the date of the commencement of service in the uniformed services plus the additional seniority and rights and benefits that such person would have attained if the person had remained continuously employed."