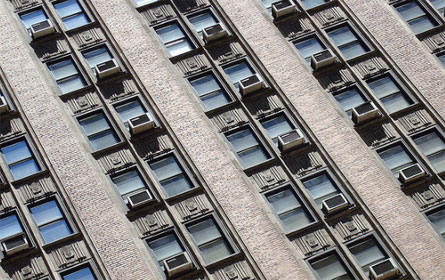 When Stuart Feldman purchased a cooperative apartment in Whitestone, Queens, in 1997, it was to provide a home for his parents, Clara and Jerome Feldman who were in their eighties. Three years later, the family had an air conditioner installed in one room although the building had a central cooling system. After another three years, an employee of the cooperative corporation noticed the unit protruding through a brick wall on the apartment’s terrace. Management said the air conditioner was against their rules. The co-op and the Feldmans have fought this issue in and out of court, where it has now ended in a judicial determination and order. In November, the the Feldmans won their case and were awarded legal fees.

Upon learning of the existence of the air conditioner, the management of the Cryder House informed Stuart Feldman that he was in violation of the lease and the building’s rules which prohibited installation of such units. If he did not remove it within five days, he risked having his proprietary lease and ownership of his shares in the co-op terminated; that would lead to the eviction of his parents.

The boards of directors of cooperative housing, which is considered by some to be an ironic description, have enormous control over their buildings and the occupants. They have almost unfettered powers to act in what they determine to be the best interests of the corporation and the shareholders in general, under something recognized by the state’s highest court as “the business judgment rule.” But in this case the Board came up against charges more powerful.

The board was met by a lawsuit commenced by the Feldmans complaining of discrimination. It was alleged that Ms. Feldman was highly allergic and asthmatic but that air conditioning eased her breathing. The absence of purified air, the plaintiffs claimed, interfered with her ability to carry out the “activities of daily living.” The charge was discrimination based on her physical condition, a violation of federal, city and state laws including the federal Fair Housing Act, and the New York State and New York City Human Rights Laws. Her eviction based on her disability or impairment would constitute an unfair housing practice. The plaintiffs argued that even if there was a violation of the building’s rules, it was minor and was outweighed by Ms. Feldman’s medical needs and legal rights. Still, the defendant corporation continued to press for removal of the air conditioner, and, otherwise, removal of the occupants.

A judicial hearing officer appointed by Justice Martin Schulman of Queens Supreme Court agreed with the defendants that the unit was prohibited, and that the Board had never consented to its installation. However, there was no evidence that this caused substantial damages to the building or other residents, who could neither see nor hear the air conditioner, and who had never complained about it. The hearing officer found that while the building does have cooling units; those units do not provide the filtration provided by the air conditioner, and are not in use all year round. He also reported his findings that Ms. Feldman needed air conditioning to protect her from pollen, dust, mold, lint, feathers, and other allergens which caused her to suffer severe headaches, coughing, sneezing, pain, and difficulty in breathing. An expert witness, Dr. Morton Teich, an allergist and immunologist, testified that exposure to such allergens “induced a reaction including local skin reaction, nausea, burning sensation, itchy throat, dry cough and general malaise [because she is] extremely allergic, hyper-reactive and had delayed reactions [which would last for days].” The air conditioning unit, he testified, was medically necessary for Ms. Feldman’s health.

The post-hearing report led to a determination of discrimination in the defendants’ refusal to accommodate Clara Feldman’s medical needs, without which she could not enjoy the apartment in which she resided, as others do enjoy theirs. The business judgment rule may be nearly all-encompassing, but does not permit co-op boards to discriminate, in this case, against residents who have special medical needs.

While not cited by Justice Schulman, the Court of Appeals had previously ruled in a Manhattan case that a midtown co-op’s ban on the installation of washing machines and dryers could not override all circumstances. In that case, Merle Hirschmann v Constantine Hassapoyannes v 20166 Tenants Corp., Et al., an apartment buyer had cancer which necessitated the frequent laundering of his bed linens and undergarments. The State’s highest court found that the installation of the machines was a reasonable accommodation to the plaintiff’s infirmities, and the board could not discriminate by withholding consent despite their rules.

The result in Feldman v Cryder House is that plaintiffs can maintain the air-conditioning unit as long as Ms. Feldman resides in the apartment. The family will then be required to remove it and repair the wall. The co-op corporation was ordered to pay the Feldmans’ legal fees.